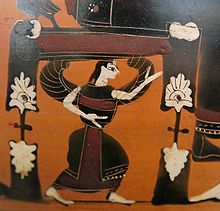 From Wikipedia, the free encyclopedia:

In Greek mythology, Metis (Μῆτις, “wisdom,” “skill,” or “craft”) was of the Titan generation and, like several primordial figures, an Oceanid, in the sense that Mètis was born of Oceanus and Tethys, of an earlier age than Zeus and his siblings. Mètis was the first great spouse of Zeus, indeed his equal (Hesiod, Theogony 896) and the mother of Athena, Zeus’ first daughter, the goddess of the war and wisdom. By the era of Greek philosophy in the fifth century BCE, Mètis had become the goddess of wisdom and deep thought, but her name originally connoted “magical cunning” and was as easily equated with the trickster powers of Prometheus as with the “royal metis” of Zeus. The Stoic commentators allegorized Metis as the embodiment of “prudence”, “wisdom” or “wise counsel”, in which form she was inherited by the Renaissance.

The METISfiles is dedicated to solving strategic issues for executives in the Internet, IT and telecommunications industry. We help you realize your ambition through delivering facts-based analysis, creative thinking, and actionable advice.