The 3rd Tuesday in September is a peculiar day for ICT stakeholders in the Netherlands. Since there is no such thing as a department of Digital Affairs the question always is whether ICT or related concepts will be mentioned in the king’s speech. After all ICT is widely regarded as the enabler of digital transformation and accelerator of economic growth. But does it get the official credit for it? In the table below we made a Word-count for ICT and related concepts for the last 9 years in the king’s speech.

Given the pivotal role of ICT in our economy it is a disappointing score. Only ‘Cyber‘ (always mentioned in combination with ‘threat‘) pops up a few times over the last few years. Then again, the king’s speech is just an overall State of the Kingdom affair; it looks back, it analyses the current situation and announces some governments top line plans. Yet, it remains disappointing considering the ambition of Dutch government to become the digital spearhead of Europe. This ambition is stated in the Dutch Digilisation Strategy that was released in June 2018. (Note that “Digilisation” is used as the translation of “digitalisering” instead of more familiar terms as “digitalization” or “digitization”. In the rest of the digital strategy paper the term “digitalisation” is used.)

Moreover it is not the only ambition of the Dutch government.  The strategy paper mentions 3 key ambitions:

These key ambitions translate further into 24 sub-ambitions. It is in fact the first-ever holistic view of Dutch government with respect to the role of digital technologies. Kudos for that. 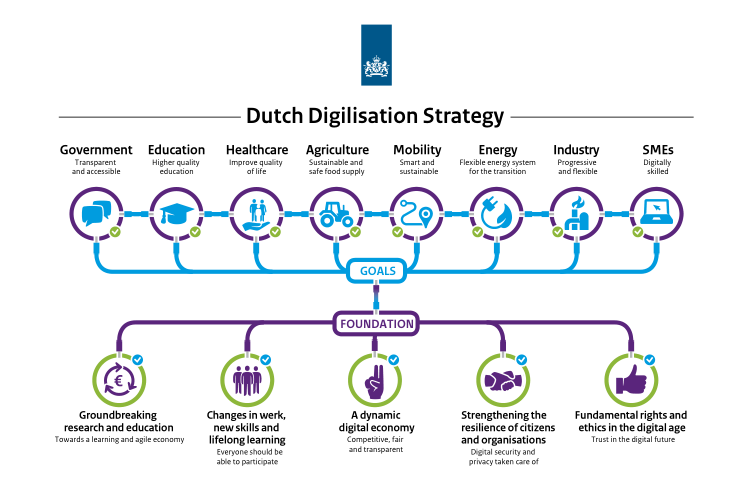 Other countries such as the UK and Belgium have these digital strategies too. In fact the UK’s ambitions are a bit of the same and translate into 7 key goals:

The Belgian government also has a digital strategy called “Digital Belgium”. They stated their digital ambition to become a digital frontrunner back in 2015.  Key ambitions are:

It may not come as a surprise, but the Dutch digital ambitions look a bit, well, a lot, like those of our surrounding countries. Nevertheless, all these ambitions make sense. Cyber security, digital skills, open data, first class digital infra, digital government services, etc., are key issues in a country’s digital transformation process.

It is time that the government’s digital ambitions are substantiated with more than just time, effort, promises and vague objectives and put their money where their digital mouth is. As € 182 billion of our GDP (29%) is currently generated by our digital workforce, this doesn’t seem very unreasonable.