A year ago R3 and Microsoft announced a partnership. R3 named Microsoft’s Azure as its preferred cloud provider for its R3 Lab and Research Center  who “will provide cloud-based tools, services and infrastructure for R3 lab locations around the world, as well as dedicated technical architects, project managers, lab assistants and support”. For R3 it opens up Microsoft’s ecosystem of blockchain partners that can accelerate research and development of blockchain solutions. For Microsoft it is another way to generate business with its Azure platform. Microsoft Netherlands went even further by offering a free sandbox on Azure for blockchain developers.

IBM has also set its eyes on becoming the leading blockchain provider and competes head on with Microsoft. It recently announced its own Blockchain as a Service offering on the Open Hyperledger Fabric from the Linux Foundation. Developers can create, deploy, run and monitor blockchain applications on the IBM Cloud or on IBM z Systems. Last week IBM was selected by a group of 7 European banks forming the Digital Trade Chain Consortium (Deutsch Bank, Rabobank, HSBC, Sociëté Général, Unicredit, KBC and Natixis) to lead and build a blockchain based trade financial platform  for smaller businesses. Last but not least IBM is scaling blockchain capabilities to its AI Watson platform.

Amazon is also working the blockchain hype. In 2016 AWS announced a partnership with the Digital Currency Group, a group that includes over 70 bitcoin and blockchain companies, to generate a Blockchain as a Service offering for financial services firms that want to experiment with blockchain technology. AWS is offering the blockchain sandbox.

It is not just the big PaaS providers who are betting on this promising technology. Angled.co lists almost 700 Blockchain startups. Last year PwC estimated $1.4 billion have been invested during the last 9 months of 2016 into blockchain startups. It is probably why Gartner put blockchain technology almost at its peek of inflated expectations. No doubt there is a vast amount of blockchainwashing going on. 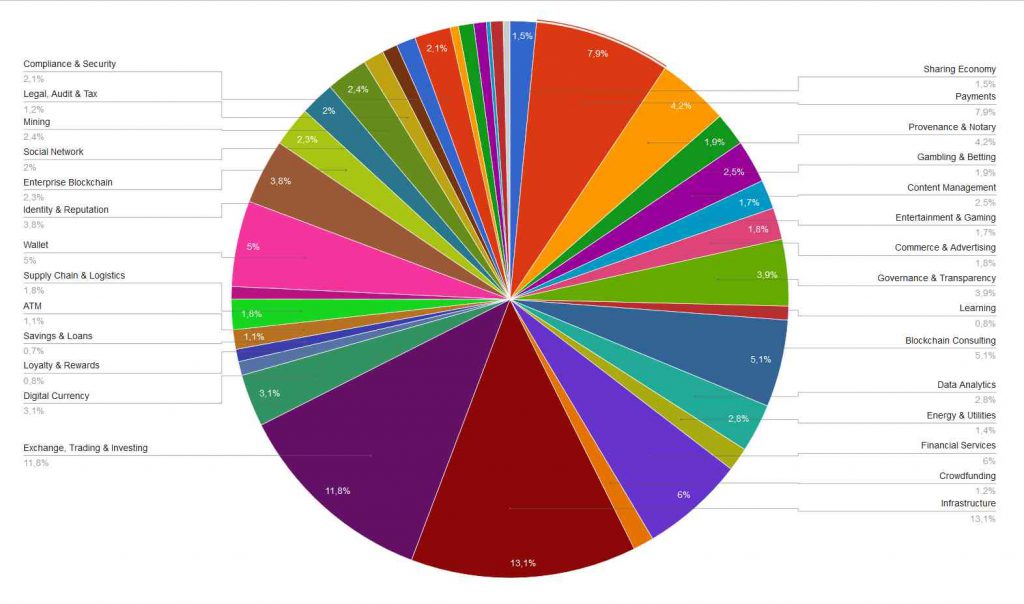 After the wheat has been separated from the chaff we will recognize that blockchain is not just for digital currencies but more a foundational technology that has the potential to disrupt every sector in our society, not just banks. Outlier Ventures start-up tracker shows that only 3.1% of blockchain start-ups focus on digital currencies while product services categories such as exchange, trading & investing, infrastructure, payments and financial services represent almost 40%. The graph also illustrates the already vast spectrum of product services categories blockchain start-ups are aiming for. So, while Uber and AirBnB are still the most admired unicorns they may turn out to be easy targets for disintermediation  by the blockchain. In the long run foundational technologies turn out to be way more transformative than just apps and a transaction database …

Amazon Cloud: The Results Are In
The Connected Consumer Ecosystem War
Software is niet het probleem