In our series on the future of work we have touched upon several lines of business where humans are in the process of being replaced by machines. From the 2013 study from Carl Benedikt Frey and Michael A. Osborne called The Future of Employment: How susceptible are jobs to computerization? It became clear that many occupations are likely to be replaced but that a firefighter, installation or repair career still seemed a pretty safe bet. In the same study the category physicians and surgeons ranked 15th on the future proof occupation ladder indicating that taking on a medical profession offers a far better perspective than say that of an accountant or auditor (94% chance of being computerized, ranking 589th out of 702 professions). If you want to check how safe your profession is check this site.

But while the study shows a healthy perspective for  the physician and surgeon the composition of the job is gradually changing. Because, after all, do we as patients prefer to be treated by a robot, or rather be cured through a confident doctor’s and the care from the understanding nurse? Nevertheless, robots are entering medical professions. While adoption of robots in the care sector with its heavy lifting and other physical demanding labour, makes sense, the cure sector is not excluded from robotization. 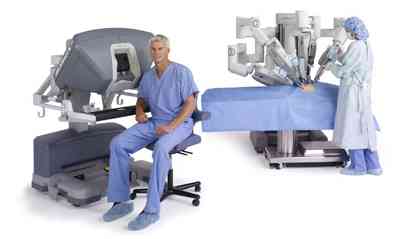 Da Vincy Surgical Systems enables surgeons to leave the cutting to the robot while the surgeon sits at the console looking in a stereo viewer displaying an image from a binocular endoscope and manipulating hand controls which in turn operate very tiny wristed laparoscopic instruments (thin tubed surgical instruments with camera) inside the patient. It is still the surgeon who is completely in charge of the operation but the robot driven surgical system combines a 3D image body view with wristed instruments that can bend and rotate further than a human hand. The robot system in fact enhances the surgeons capabilities and control which in turn leads to better chances of success. Surgeons will not be replaced any time soon. However, much of the operating procedures will eventually be automated or robotized replacing people who today still seem indispensable.

It’s not just robots entering the health care system. IBM’s Watson can absorb and store massive amounts of medical data, journals, books and case studies ( 1 million books per second). That combined with capabilities such as information retrieval, machine learning, natural language processing and automated reasoning makes it a formidable resource for diagnosing patients. Again, the final diagnose is still up to the doctor but his judgment is greatly enhanced by using Watson’s vast library of documents and AI capabilities. In fact some think that Watson is better at diagnosing than doctors.

Maybe the conclusion of the study on future proofing professions such as physicians and surgeons was slightly overoptimistic. Or maybe the future is arriving a bit sooner than expected.

The Future of the App is inside the Store
The Digital Punch Clock
Business Computing: Past, Present and Future