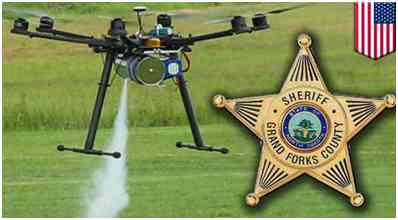 There seems to be a law that describes the usage sequence of new technology. First there is the military that take an interest in a new technology, then it is being consumerized,  and ultimately civil government takes an interest. Take the history of UAV’s. Unmanned Aerial Vehicles have been around for over 150 years but only since the mid ‘80s has their significance increased and are they no longer perceived as expensive and unreliable toys. Moreover, UAV’s and more in particular the US RQ-1 Predator and MQ-9 Reaper Hunter have carried out hundreds of missions during the Balkan and Afghanistan wars. Not just for gathering intelligence but also for precision airstrikes.

As drone technology is quickly evolving, costs are coming down too, making them available for the mass market. Consumer drone prices start at € 30 Euro for a miniature camera drone. At the same time they are becoming more reliable, their payload is growing and range expanding. Now governments increasingly are taking an interest in drone technology. This interest not only stems from the need to solve the legal headache caused by drone usage of the general public but also from acknowledging the drone potential for carrying out civil tasks. In the Netherlands drones are used by law enforcement for surveillance tasks or to localize marijuana farms. It probably will not stop there.

In the US drone technology is about to cross a new border. The state of Connecticut is considering to equip police drones with deadly weapons. While the proposed bill is met with concern from civil right and liberties groups the very fact that the idea is materializing in a proposed bill means that it is on the agenda. It wouldn’t be a first time that something that seems repulsive at first will eventually be regarded as useful once our minds have gotten the time to get used to it. Of course in a few years from now police drones will carry weapons. From then on it is just a small step to use them occasionally and, after the inevitable function creep, it becomes the standard. After all, what is the purpose of having weaponized drones if you don’t use them? Or, in the words of US Democrats Bridgeport senator Edwin Gomes: “I think that police are taught one thing, you put a weapon in their hand, they shoot center mass, they shoot to kill. If it’s going to be used, you’re going to use it to kill somebody.” Yes, the future of police is definitely at risk.

Dutch Software Vendors Should Play the SaaS Card Right
Why IP should be kept out of TAFTA
Consolidation in Dutch Cloud & Hosting Sector Continues
Share and Enjoy: