Digital Transformation is the process that shows how digital technologies impact business communication, decision making, automation and innovation. The speed at which digital transformation is reshaping our economy, however, is not constant and, as a recent study of DHPA, DDA, ISPConnect and The METISfiles concluded, can be positively influenced by taking a few measures regarding coherent government policies, sustainable energy, digital infrastructure, digital security and promoting the Netherlands as digital gateway to Europe. But how do we quantify the progress of digital transformation?

Two years ago The METISfiles concluded that traditional attempts at sizing the digital economy by adding up outputs from digital activities do not provide much insight. More recent sizing efforts combined big data with traditional statistics but still exclusively define and calculate the digital economy as the sum of e-commerce transaction value plus the revenue of the ICT sector.

To size an economy, economists use the concept of Value Add (the difference between revenue and intermediate consumption) and Gross Domestic Product (the sum of all value add plus indirect taxes minus subsidies). The reason economists select the value add approach is simple: the total value add of a country is a far better indicator of the wealth and income of that country than summing up transaction values.

The Dutch Digital Economy, although much discussed and praised, is not sized in terms of value add or GDP. The METISfiles therefore developed a method to size the Dutch Gross Digital Domestic Product (GDDP); GDDP being the sum of all Digital Value Add (DVA) generated by Dutch organizations. Digital Value Add (DVA) is the part of Value Add (VA) generated through the use of ICT. More in particular, The METISfiles defines DVA as the VA created by employees that are for more than 50% of their working hours depending on ICT for carrying out their primary business tasks. 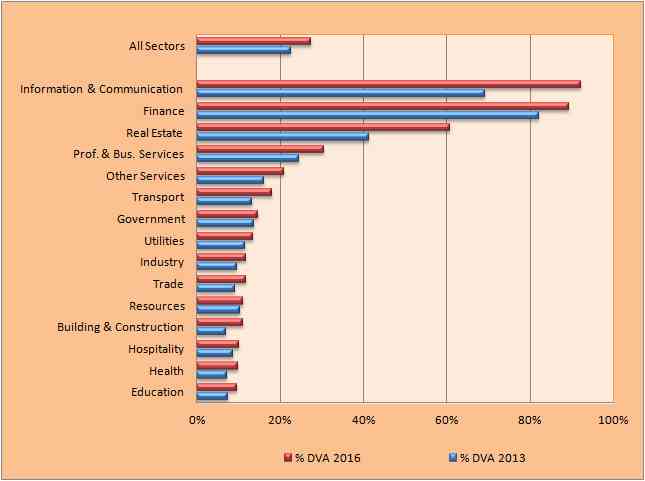 The first run of our DVA model was based on the 2013 employee, occupation and value add data from the Dutch Central Bureau of Statistics (CBS) and revealed a GDDP of € 129 billion or 22% of Dutch GDP. Recently we updated the model to establish a trend line for the Dutch Digital Economy. As the CBS recalibrated their 2013 data, our GDDP result for 2013 was consequently adjusted to € 132 billion. Our most recent sizing of the Dutch Digital economy showed a 3 year compound annual growth rate of almost 9% while the total value add of the Dutch economy grew by less than 2% per year.

In absolute value the size of the Dutch Digital Economy grew from € 132 billion to € 171 billion and now makes up 27% of the Dutch economy. Interesting differences in terms of DVA can be noticed between the various sectors (see Figure). ICT, finance and real estate DVA shares seem to reflect their clear digital native or digital driven nature. Moreover, it will be difficult for these sectors to increase their current DVA share as they have almost reached their digital ceiling. The services sectors (Professional Services, Business Services and Other Services) show a clear growth in their DVA share compared to three years ago. These sector’s business abilities and opportunities are typically enhanced by digital transformation and have plenty digital opportunity left. Other sectors show a DVA below 20%. While some of these sectors do have a large digital opportunity, for instance government or utilities , business processes in sectors such as hospitality, healthcare and education depend on physical interaction between people and thus will always have a large part of traditional value add attached to their activities.