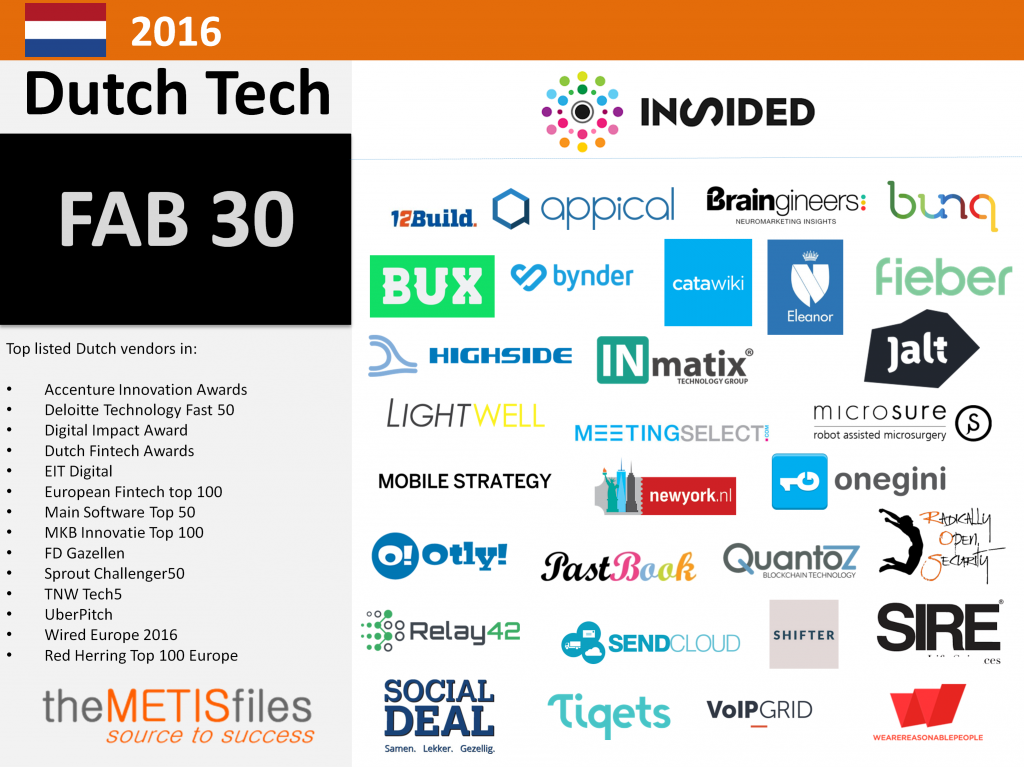 It’s that time of the year again, and yes we have got one too: a list. This year we decided once again to take a closer look at the companies that entered into tech beauty contests, hoping to be confirmed as the fastest growing or the most innovative company; preferably both.

Just like last year we have looked at a variety of lists to create the Dutch Tech Fab 30; only commercial accelerator programs such as Rockstart were excluded from our collection of lists. We included the most relevant lists of the Netherlands and also some of the better known international ones like Wired and Red Herring. This year we also looked at UberPitch as one of the new competitions with Uber being the ultimate unicorn example.

These lists look at different variables such as size, growth rate, or most promising technology. Not all lists focus on just tech; online retail or social networks are often included as well. For our Fab 30 we only selected those companies that have a technology component. Using these lists as a base we tallied the # of mentions each of these companies received. The result is a list of young innovative vendors that we deem to be the coolest tech vendors of 2016. And the winner, this year’s coolest tech vendor is: Insided.

Similar to last year there are relatively many Fintech companies on the list. Bunq, Bux, Otly!, Quantoz all offer financial services. Of these, Bunq is the most mature being founded in 2013 and having 68 employees.

There are a few special mentions:

So, what’s in it for the winners?

Most of the contests offer some sort of prize or special benefits (mentors and access to capital). In that respect it is rewarding to get nominated or included in the lists. In addition there is a lot of buzz and it creates press attention, albeit for a short period of time. There certainly is no eternal fame. With the increasing number of tech contests it becomes increasingly difficult to cash in on the momentum that is given. But with a serious lack of marketing budgets and only one unicorn in the Netherlands, it can’t hurt to enter into these competitions either. It helps build the Dutch tech ecosystem and facilitates acceleration, and – who knows – the next Adyen may be in this list.

Charting the Dutch Digital Economy Part X: Internet Economy Revisited
The Future Of Communications Is Inside The App
Personal Cloud: Beyond Control and Convenience