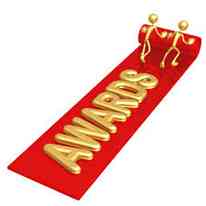 Who ever said IT is boring? This week there was plenty of partying going on. It was a time for recognitions and awards with a staggering rate of three events in one week. Accenture kicked off on the 28th with the Accenture Innovation Awards. Computable held its annual award event November 1st while Main Capital is to present its Top 50 November 3rd. Though you won’t hear us complain about three parties in one week it does make you wonder about their relevance. For a small country like the Netherlands, three award shows in one week might be pushing it a bit. In addition, it is increasingly difficult to find new contestants. The lists are overlapping and just a reshuffle of the nominees.

Computable Awards is mostly a popularity contest as for most categories computable readers get to vote for their favourite. It does not actually say that you’re good or the best at what you do. It’s the ICT equivalent to the Televizierring where Chantal Janzen nicely points out to Humberto Tan that he is the most popular presenter, but not necessarily the best one. In the ICT industry, Microsoft is the most popular as it has won the award for Cloud Provider of the year three times since 2014 . The same goes for iSense ICT Professionals, who won the IT detachment award for the third time in a row. Fox-IT won the IT security provider award of the year for the third time. It almost makes CGI look meagre as it only won the IT service provider of the year award for the last two years.

Maybe more relevant for the zeitgeist is to look at newly introduced award categories. This year it is the Digital Innovation award. First winner in this category was Philips Health Care (which was actually selected by a jury – not the readers). Philips Health Care is run by Jeroen Tas, CEO Informatics Solutions and Services at Philips Health and a regular speaker at IT industry events. It’s the same Jeroen Tas who won the Accenture Innovator of the year award last year and who led the Accenture Innovation Award Jury this year. This year the Accenture Innovator award went to Cyprian Smits, working for the Belastingdienst The Belastingdienst also won the Computable award for ICT project of the year in 2015 for online taxes.

The Accenture Innovation Awards are not a popularity contest. There is a jury, consisting of approximately 160 experts in their field, that reviews the contenders for each of the 11 categories (all applicable in the theme circular economy). Just one prize was chosen by the audience and it went to Kwettr.

The Main Software50 is not really an award show but more a ranking of 50 software companies in the Netherlands based on 5 KPI’s. There’s no pro-active research from the organization and it’s up to companies whether to apply or not . For an application to qualify, companies need be Dutch and have at least 15% of their revenue generated by software, software maintenance  or ASP/SaaS contracts. As the application initiative is left to the companies own devise, the list will never be complete. The list misses for example some large vendors like Chipsoft and Adyen, our national unicorn.

Is it too much of the same or should we regard each event in its own right? It depends on what you are looking for. For the vendors it may be a good opportunity to show themselves to industry peers and gain some publicity along the way. On the other hand, if the same vendors get selected each time, there is hardly room for new entrants and these award lists effectively are becoming an old-boys network.

The organizers however, are aware of this. Computable has been working on its selection procedure in an attempt to professionalize the awards. Accenture, in its 10th anniversary, also recognizes that an awards show alone does not cut it and has extended the summit with other initiatives such as Innovation Exchanges, Innovation RoundTables, Pitch Arenas, Innovation DeepDives, and an Innovation Market. Hopefully Main capital will use its 5th anniversary of the Software 50 to create a more complete overview of the Dutch software companies.

Untill then  it’s time to party along!

How Apple, Cisco and Huawei Disrupted the Telecom Equipment Market
Rise of the Machines Part 5: The Final Frontier
Personal Cloud: Is It Safe?