Jack Dorsey’s first tweet was “just setting up my twttr”. We are talking March 21st 2006 and everybody is about to get their 140 characters of fame. Ten years later Twitter shows some impressive stats. There are some 310 million active users out of a total of 1.3 billion accounts sending 500 million tweets per day; it is a more than successful social media platform. The problem is, it doesn’t make a profit and even more important, investors patience regarding Twitter’s growth and profitability is rapidly fading. The active user base is hardly growing, while at the same time 2015 financial results showed a half billion dollars in losses. For that reason Jack had to come back. He had to solve Twitter’s social problem. 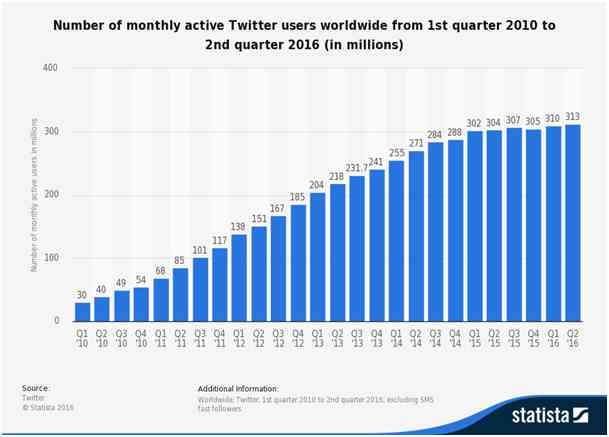 Letting 336 people go was the easy part; ugly but necessary to buy time for restoring investor confidence. However, investor confidence, higher valuation, turnover and profits will only return if Twitter can either restore strong growth in its active user base or intensify engagement in its existing user base. Neither seems to be happening. Its user base started to lose momentum as of 2013 and is now stagnating, causing advertisers to reallocate their budgets. Most notably Snapchat, also a catch-the-moment based social app, seems to attract more users and advertising budget.

Obviously Jack has done the math and concluded that Twiter should be sold. And why not? It is after all still a great platform with millions of users and currently valued at $ 12 billion. But as time goes by, interested potential buyers such as SalesForce, Verizon, NewsCorp, Google, Disney all folded. Rumor has it that Microsoft may have interest in Twitter. But so far nobody has taken the bait.

So what is the real problem with Twitter? Is it the technology, the business model, advertising prices, the competition? While all of the above could be true there may also be another reason for Twitter’s unattractiveness. Disney apparently bailed out because both the cost and the online abuse was too much; Disney’s brand is all about feel good and family values. Twitter is just the opposite. So it is not just the business issues that cause potential giants to walk away. Reputation is one of those qualities that are hard to manage and difficult to repair.

Over the last 10 years Twitters micro blogging site has evolved into a place where trolling, ranting, stalking and lynch mobs is the norm and where 23 million bots can freely push content. Twitter is a free speech and privacy advocate that hesitates taking measures to curb the online abuse by anonymous users.

But apparently, as the trolls are taking over, the user base shrinks indicating some users have had enough. It would be kind of ironic if Twitter’s free speech and privacy stand is taking it down. Realizing that Google and Facebook handle these issues by ID-ing users and enforcing censorship rules, paints an even gloomier picture: no free speech, no anonymity and giant media companies laying out the rules. For Twitter – too small to call the shots – it is classic Catch-22: ‘damned if they do, damned if they don’t’.

On a more positive note: maybe the social media learning curve shows some maturing now that people start to realize that they can just switch it off.