Last week The METISfiles attended the Citrix analyst briefing in Santa Clara to hear about the plans and progress of Citrix after Kirill Tatarinov taking over as CEO from Mark Templeton earlier this year. Tatarinov has taken his time to go public with his business assessment of Citrix and his plans to get Citrix revenue and profit back on track. Activist investor Elliot made some important contributions prior to Tatarinov joining Citrix: the spin-off of Citrix GoTo products into a separate company and the announcement of the sale of two cloud management tools CloudPlatform and CloudPortal Business Manager to Accelerite.

The product alignment and leadership change are part of a major restructuring program that was deemed necessary to strengthen the focus on Citrix’ core business: virtual client computing software. It is now up to Tatarinov to execute on the new situation and lead Citrix back from the sluggish 4% revenue growth of 2015 to strong double digit growth.

The first action he took is what many newly appointed CEO’s do: try to change existing corporate culture. After 14 years of Mark Templeton leading Citrix it is probably not a bad idea to open the windows to a changed, cloud converting outside world. 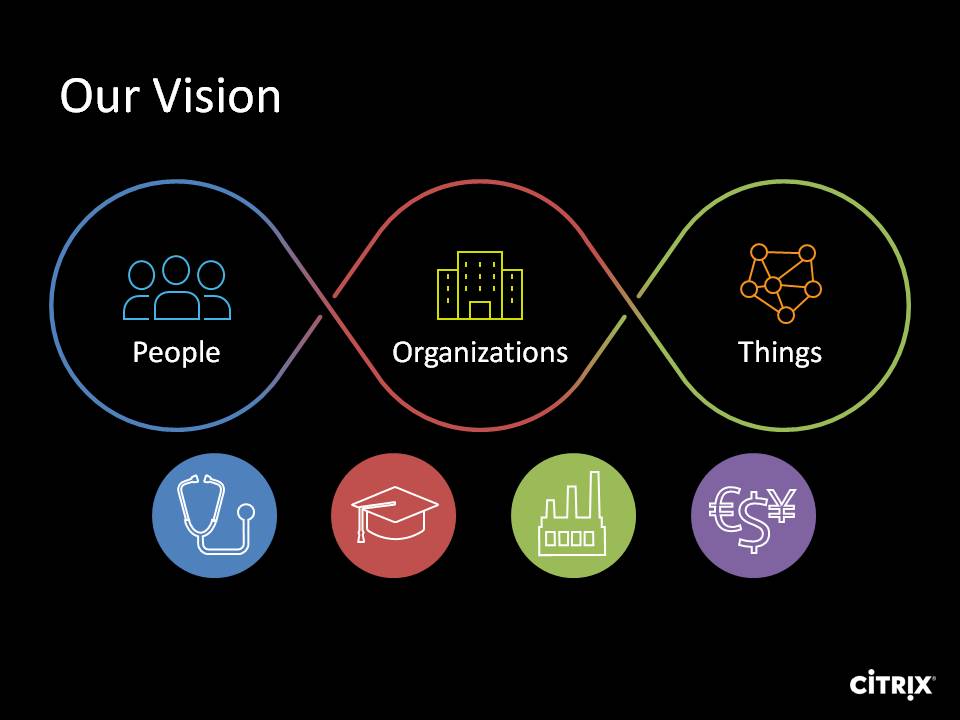 Besides changing culture, Citrix is doing what it has always done: adapt to the new new thing while maintaining its solid virtual client computing business. In the past it has rebranded its core productline from Presentation Server to Winframe  to Metaframe to XenApp in order to adapt to new realities. Execution wise Citrix always surfed the waves of the prevailing current of the day: client server, server based computing, network computing, internet computing, mobile computing, etc. Citrix’ current wave is cloud computing and Tatarinov made clear that Citrix is totally cloud committed. Citrix is even going one step further by stating that it is also ready to provide for the Internet of Things. Citrix tagline now is about connecting People, Business and Things.

Of course the symbiotic relationship with Microsoft has not changed. Most of Citrix’ business is made on the Microsoft platform and with Tatarinov being a former Microsoft executive, the relationship is likely to deepen further. It is a safe choice but it also makes Citrix even more dependent on Microsoft.

Citrix slow revenue growth has been caused by lack of focus and operational execution. With its more streamlined portfolio and cloud commitment, Tatarinov has his work cut out for him. Citrix has to go full steam ahead and crush VMware’s attempts to target Citrix’ Xen business. Future success clearly lies in a developing an effective channel/partner strategy for the Mid and SMB market where Citrix current presence is weak respectively hardly existing. While Citrix Q2 results showes a promising 7% revenue growth it is still too early to tell whether it can really turn the tide. But with an activist investor breathing down its neck turn around time is of critical importance.

The Future of Work: Software Robots
Prison Guards Terminated
Mobile Everything But The ICT Sector