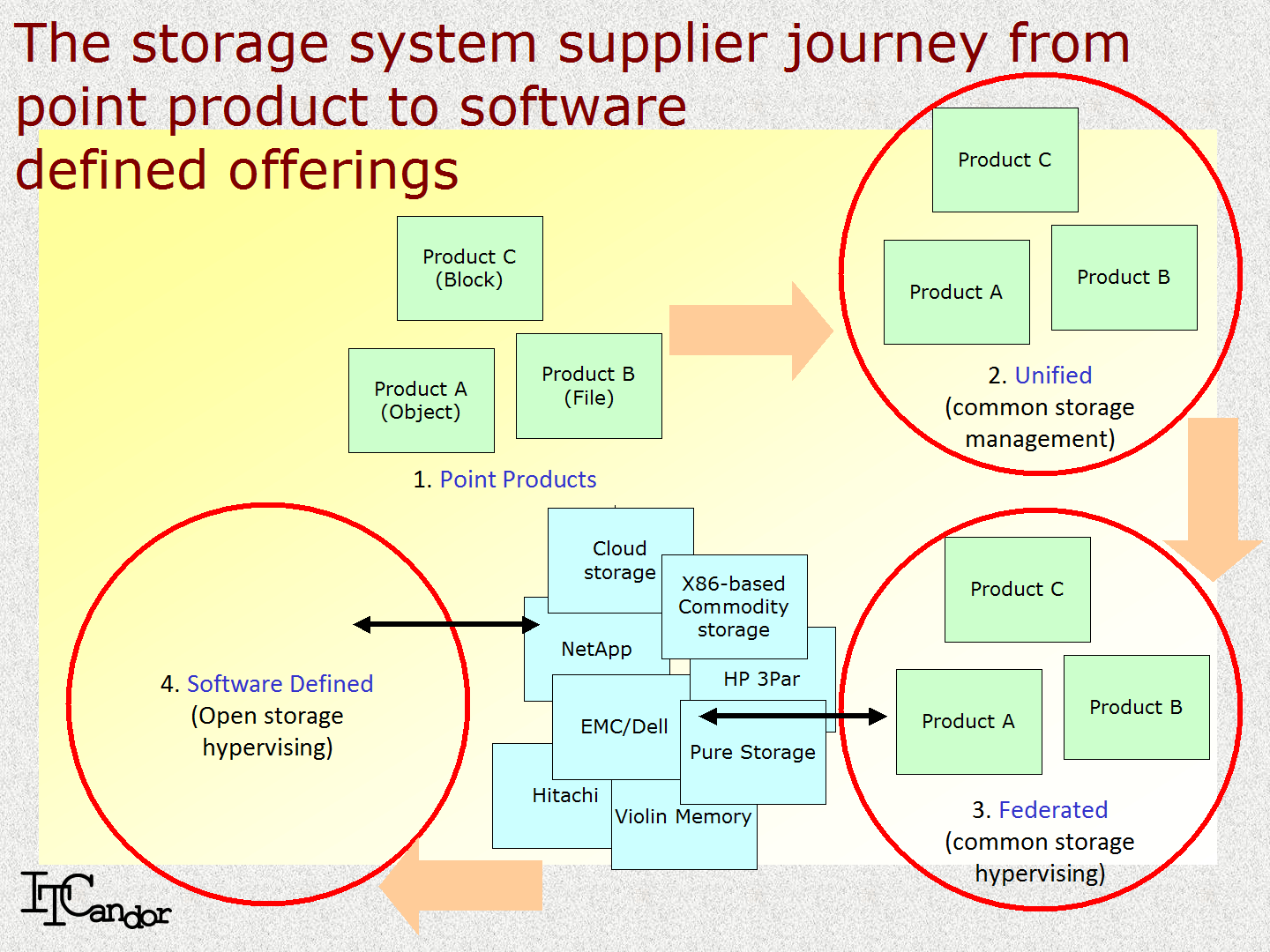 I can identify 4 developments for a storage system supplier from the provider of point products, through unification (getting all storage systems under a single management schema), to federation (adding the ability to address other vendors’ arrays) all the way to ‘software defined’ – which in this context means the ability to manage numerous storage devices without forcing customers to buy its own arrays. IBM has travelled this path in its own strategy. In the process it had to change business rules as well as develop technology. A key to becoming a ‘software defined’ supplier was its introduction of its Spectrum renaming of its storage software portfolio. In this post we’ll look at its latest announcements and put them in context of market developments.

IBM’s storage hardware business is in decline – but so is that of every single major storage system supplier. In fact the value of this market has fallen every quarter since Q1 2012. Despite being warned about the difficulties ahead of managing Big Data, customers are using cheaper storage and better management to create more efficient solutions, reducing their spending and reliance on a single major vendor (such as IBM) in the process. My table shows a comparison of the revenues of the top vendors in the year to March 2015 and 2016. The challenge is to manage profitability – a task made harder by the numerous start-up companies either offering point flash-only products (Violin Memory and Pure Storage for instance) or software to utilize x86-based ‘commodity’ storage systems (Simplivity, StorPool, StorMagic, etc.). Allowing customers to build ‘software defined’ storage excluding your own hardware lets you remain relevant by bringing your deep expertise to a different audience, but can be counterproductive to revenue preservation.

IBM’s announcements include 3 all-flash virtualized arrays – the new Storwize V7000F, V5030F and updated FS V9000 (all of which are available as part of the VersaStack offerings IBM builds with Cisco). These are designed for distributed block data workloads using SQL server, MySQL as well as traditional IT applications. They join the DeepFlash 150 announced in July. 2016 is proving to be a great year for improvements in individual solid state disk capacities – for these new products IBM is announcing it plans to support up-coming 7TB and 15TB drives, which will allow it to deliver arrays with far more capacity than today’s systems which use 2TB and 4TB drives. The FS V9000 has been expanded to include up to 20 expansion enclosures, which will allow its customers to add spinning disks and SSDs to this otherwise ‘all-flash’ array.

IBM’s announcement also includes a new version of SVC supporting twice the previous number of 10Gbps Ethernet ports for server and storage attachments, 4 times as much cache for greater responsiveness and an overall 30% improvement in performance. IBM is also announcing Spectrum Virtualize for x86 servers to target Managed and Cloud Service Providers who want to deploy storage management software on ‘commodity’ devices, as well as for offering lower cost Disaster Recover as a Service (DRaaS) without the need to deploy duplicate storage in a secondary site or cloud data centre. Initially it will run only on Lenovo x3650 M5 servers, although IBM is working to expand it to Cisco, Supermicro (the main server brand used in IBM SoftLayer data centers) and HP servers as well.

As part of IBM’s announcement this week it produced a list of its customers for Spectrum Virtualize, which includes:

These are interesting customers, smaller on average than its overall storage clients and widely spread internationally.

Unlike EMC, Dell and NetApp IBM hasn’t acquired any storage vendors since it Texas Memory Systems 4 years ago, which has minimized its need to spin the wheels on Unification (the second step in my Figure). It is arguably the most experienced of all storage suppliers, having invented the first tape and disk drives in the 1950s and customers recognise that it is a potentially strong and reliable vendor. Allowing its Spectrum Virtualize and SVC customers and Service Provider partners to build solutions with other vendors’ x86-based servers and storage is a major step towards completing its journey to becoming a ‘software defined’ storage supplier, even if it can only be done on Lenovo servers at first (which used to be IBM System x of course).  Parts of the announcement show that IBM is slowly moving away from Fibre Channel solutions to FCoE and iSCSI connections, which will be welcome for many newer customers.

Other vendors will also double and quadruple the raw drive capacities of their flash arrays in the near future, few will be able to integrate them so efficiently into such a rich tapestry of storage management. Taking advantage of its proven performance, security, connection and interoperability expertise on commodity storage arrays will be particularly attractive to the many new ‘born on the Web’ start-ups, who otherwise might use untested suppliers or inappropriate and expensive hardware.

The Public Cloudscape
IT Through The Looking Glass – Why Your POV Matters
Data Centers and the Cloud
Share and Enjoy: