During the 14 years that the BSA has released its piracy study it has changed its tone of voice and the angle of the study. They smartly moved away from the hard accusing and confronting tone, stressing high piracy rates and staggering numbers of dollar losses caused by piracy. This change coincided with the consumer transition from PC to smartphones and tablets. For businesses and governments this transition is still happening but not as fast and intense. As the consumer PC-base is collecting dust the impact of consumer PC software piracy on the total rate is declining. The BSA accordingly refocused its piracy curbing efforts to businesses and governments only. Using the proven method of creating fear, uncertainty and doubt (FUD) the BSA informs us:

The usefulness of this advice is based on the assumption that organizations want to focus making money of their core business and would happily avoid anything that could threaten this. The bottom line is: you can make more money by avoiding unlicensed software.

But with all the benefits of properly licensed software and the potential disasters of unlicensed software why would anyone pirate software? A fair question as in 72% of the researched countries half of the total PC software deployed was unlicensed.

The study “Intelligence and Crime: A novel evidence for software piracy” is an effort to explain the reasons behind software piracy. The authors of the study compare the results of the BSA 2012 piracy study with national IQ rates of 102 countries. 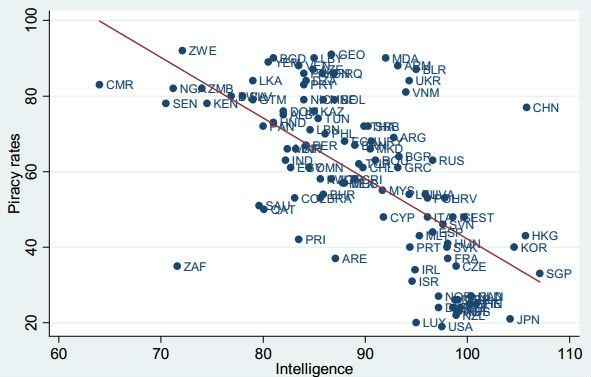 Their conclusion is “ … that intelligence has statistically significant negative impact on piracy rates. We also conclude that the estimates remain robust when we address potential endogeneity of IQ and for the existence of outlier countries in the sample.” This also means that their “… findings indicate that if ruling elite enforces policies to decrease software piracy, intelligence provides a credible proxy of the degree of consent of such policies. Indeed, agents with higher cognitive abilities are more politically active.” The last phrase is important otherwise ‘stupid’ countries would have no reason to lower piracy. There are however a couple of problems with this study. As for the IQ data:

As for the piracy data there are some issues too:

While intelligence is pretty much a homogeneous concept there is an ongoing and heated debate about IQ, its composition, use and interpretation. The PC software piracy rate on the other hand compounds a broad range of products and (groups of) users resulting in one single rate. By comparing  these two data sets the authors are simply comparing apples and oranges.

The study sets out to prove that intelligence is an important factor in explaining software piracy. To back up that theory the reports reference list shows a considerable number of studies that also use intelligence as a explanatory factor. The study however is still about correlation and not causation. At best we can say this study captures spurious correlation. As a result it does not provide insight into the motives of people and organizations using unlicensed software. That should not surprise us since people and organizations pirate and/or use under-licensed software for various reasons; or, if they are unaware of the fact, for no particular reason at all. Maybe the unsatisfying answer to why people pirate software is … because they can.

SAP Business One – This Time We’re Serious!
Getting Rid Of E-Waste
Happy Holidays and a Successful New Year