In our series on the future work we watch the development of innovative robotized functions hitting the market. So far we covered the robotized prison guard, burger flipper, order pickers and cars as innovations where robot technology redefines an existing function.

But innovations that really captures people’s imagination are drone based appliances; for the sake of argument we define drones as  flying robots. Many people experience flying as something exclusive and elusive unlike their everyday commuter car ride. Surface bound robots such as the Bratwurst Bot may be very interesting to a select German audience but to become a killer app it should be more than just a very good sausage grilling machine. A real killer bratwurst appliance would combine the grilling capabilities with a timely delivery service generating  instant satisfaction.

It is these kind of drone applications that capture the imagination of everyone; the drone that can remotely see and do things for you. These days, for a fist full of Euros, you can have your own drone and for a few Euro more, say €700, you can own a camera equipped, cloud connected drone that stays airborne for half an hour, has an operating range of 10 km and can carry 2k’s of cargo.

As drone technology is rapidly maturing and becoming more affordable to the masses,  people start dreaming up their own killer app. And as usual the dark side of society is very quick to use this technology for some bad apps. Two years ago we anticipated drones  would fulfill a certain need for criminals and it did not take long for that to happen. Right now drones are a serious threat to prisons as they smuggle narcotics, cell phones and weapons into the facility. At the same time we see people experimenting with arming their drone. That is probably not where the buck stops.

Not so bad but kind of ugly are some delivery drones that cater to people’s vices. Delivering booze, drugs and snacks on demand is not exactly beneficial to people’s health but for many people it satisfies a very basic need for convenience: doing nothing and still being serviced. That is exactly what 7-Eleven promises to do with their drone delivery service to customer’s homes. Unfortunately, if you just want to have your donuts delivered while sitting in your garden those 260 calories per donut will no longer be offset by the required 68 minute walking trip to the supermarket. On the other hand, if you want to have that cold beer while climbing a mountain but don’t want to lug around cans or bottles, drone delivery is a godsend. 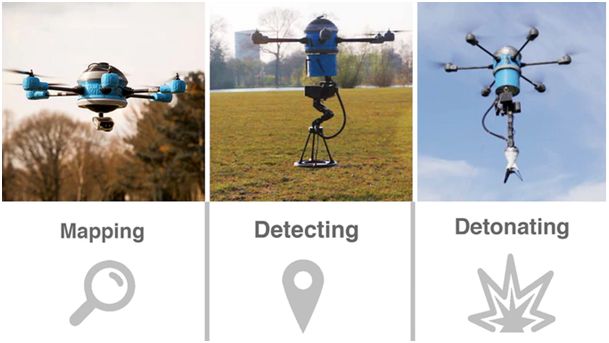 Of course not all drone apps are bad or ugly, there are some very good applications too. One of the most promising use of drones for humanity so far is finding and dismantling mines. After first having designed a wind-powered demining system – Mine Kafon – it became clear to designer Massoud Hassani that while cheap to operate it missed some intelligence and precision. Enter the Mine Kafon Drone. The MKD is a drone equipped with a metal detector and a high precision GPS to detect and map mines. On top of that it is able to deliver a explosive unit to the detected mine and detonate it from a safe distance. This drone method would be more cost effective and save lives and material. Could it really be that silver bullet for a massive problem?

Telcos Beefing Up Cloud Efforts
It is Official: an E-book is a Book
Bling Phones Mark Maturing Smartphone Market
Share and Enjoy: