February 2016 The European Commission released a press bulletin on the digital state of its European members. Apparently The Netherlands climbed two positions on the European digital ladder and now holds a second place after Denmark. Reasons to be cheerful?

Figure 1: Pillars of DESI and IDI

The index is based on 5 pillars: Connectivity, Human Capital/Skills, Use of Internet, Integration of Digital Technology and Digital Public Services. Each pillar is weighted to its relative importance (according to the EC) and together they make up the 100% of the Digital Economy and Society Index (DESI). Each pillar further consists of a series of weighted indicators.

DESI is much like the ITU’s ICT Development Index (IDI). IDI consist of 3 pillars that together constitute the index: ICT access, ICT Use and ICT Skills. Each pillar has its own weight in the total index and consists of subsets of indicators. The difference is that DESI tries to capture the progress of Digital Public Services (e-government) and the Integration of Digital Technology. 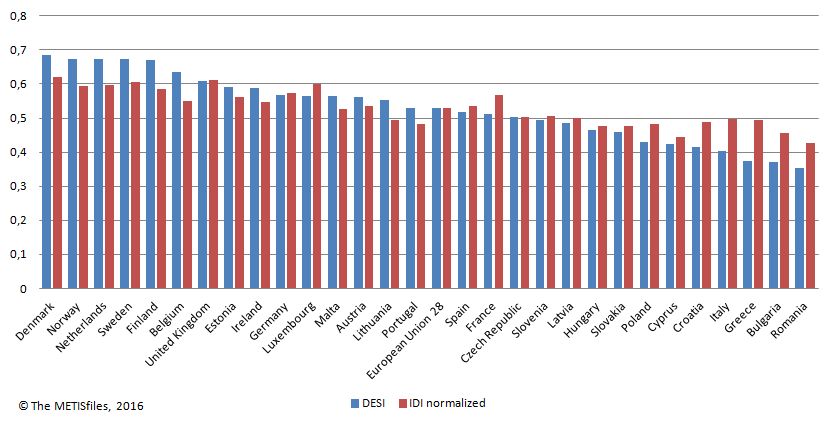 To compare apples with apples we have scaled IDI to the DESI scale using the European 28 average of both indexes. While DESI is a slightly more broad index the country values per country do not vary a lot. Denmark is still the winner and Romania is at the bottom. The one thing that can be noticed is that the differences between the indexes are highest with the top 6 and the bottom 5. The DESI also allows for slightly higher peeks and deeper troughs.

So we have two indexes very much alike in method, pillars, indicators and results. While the DESI press release tries to stress country changes, the fact is there is not much change. In the press release it is said that the bandwidth between the highest and lowest scoring countries is indeed shrinking. But what do these indexes actually tell us? The DESI definition stresses a country’s digital performance and competitiveness and IDI is all about a country’s evolution towards an information society.

DESI “summarises relevant indicators on Europe’s digital performance and tracks the evolution of EU member states in digital competitiveness”. The index tries to reflect in a single number where a country stands on the digital ladder compared to other EC countries, and how it stacks up against other non-EC countries. The purpose of course is to help member states make the right priority investment in their march to digital development.

IDI  is “a composite index that is used to monitor and compare developments in information and communication technology (ICT) between countries and over time”. Its purpose is to measure:

The problem with these indexes is that they are showing us only the requirements for reaching digital competitiveness and performance or in case of the IDI, the state of the information society. But in reality both fail to show what the impact is of all that connectivity, the growing pool of digital skills and the increasing intensity of internet usage that they are measuring. These indexes merely show that the required digital assets are pretty much on track for most EU countries. But are these assets really delivering?

It is strange that having invested more than € 310 billion in ICT in The Netherlands over the last 10 years we have no clue which part of our GDP is generated through the use of digital technologies (for more info read here, here, here and here). Since the business sector takes care of more than 80% of ICT investments it makes sense to start  measuring the impact of a company’s digital assets in terms of digital value add and innovation. After all the current name of the game is digital transformation but if we can’t measure its outcome you don’t know its impact. Both the EU (DESI) and the UN (IDI) bet on digital technologies as the driving force towards more prosperity, equality and happiness in our society. Love to see an index on those three.

Police Future: Less Cops, More Drones
Marketing Budgets & Unicorns – Both Scarce in the Netherlands
The GM & Lyft Alliance – If You Can’t Beat Them Join Them
Share and Enjoy: