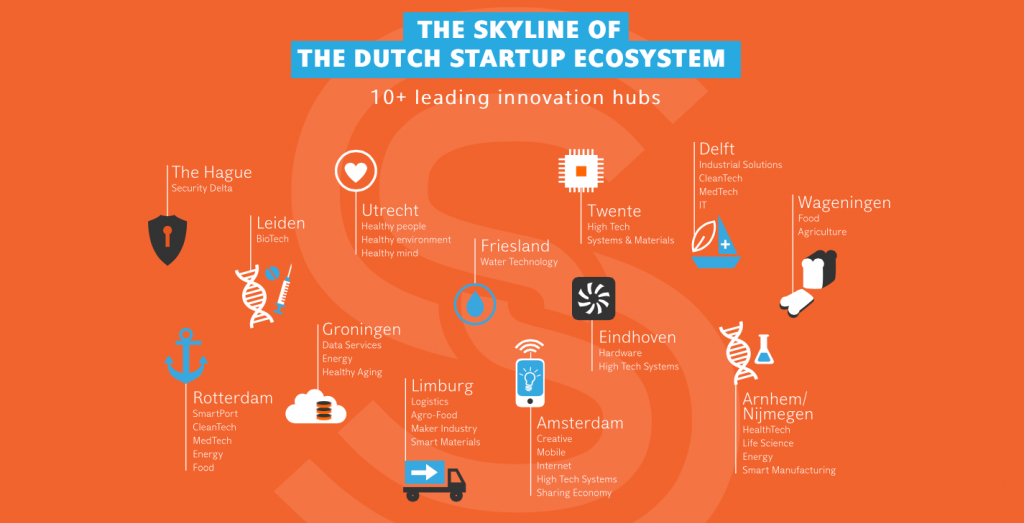 StartupDelta is almost at the end of its planned time to exist. In June the platform should have attracted a sufficient  amount of traction to make it self sustainable. StartupDelta has had a very brief time to achieve very big goals. Within 18 months it aimed to move up the ranking scale and become part of the top 3 best startup ecosystems in Europe, which it achieved.  In addition, StartupDelta aimed to: “Link up, Change the system & Create impact”.

At first sight StartupDelta has largely been about connecting the hubs. The hubs in this case being the various regions in the Netherlands claiming their technology expertise. Right now the StartupDelta has identified and documented 13 hubs, ranging from water technology expertise in Friesland and biotech in Leiden to high-tech in Twente and Amsterdam. Next to identifying the hubs StartupDelta aims to connect the hubs. Special representatives from each of the hubs meet up every two weeks to discuss where it makes sense to complement each other. However, the hubs still have many local initiatives as well. High-Tech campus Eindhoven for example recently introduced an in-house VC desk that is permanently occupied, the VC-in-residence.

Since its inception, StartupDelta has also worked hard to streamline startup initiatives and change the system. Support is open and accessible to all hubs, ranging from workspace to events, job boards, and specific business support initiatives. In addition and based on the Startup Manifesto StartupDelta has been able to push forward a significant number of regulatory and policy related actions that need to be taken to create a more attractive startup environment.

Probably more valuable though than the hubs and the connections is the awareness that has been created around the Dutch startup scene. Kroes & co have been able to create a lot of visibility for the platform, attending and speaking at startup- and related events, visiting Silicon valley and creating mind share for the Dutch startup environment. Also Startup Delta has been very busy marketing the Netherlands as a preferred country to house your startup, mainly to foreign entrepreneurs or foreign investors.

That being said, is that a true benefit for the startup ecosystem? Has it increased startup investments? Have we produced more unicorns? Do startups have better access to capital, guidance from entrepreneurs or access to launching customers?

Some of these questions can be answered quite positively, others not so. From a funding perspective, and we are tracking more data than ever,  Dutch startups have raised €429 million euro in 2015, 70 million euro less than 2014. Less money more deals, as the money was  distributed to 153 in 2015 compared to 76 deals in 2014. And though the Netherlands gets a high ranking based on the Startup Manifesto in Europe, it was still positioned 19th on the global rankings. Also access to capital is less of a problem. The number of VCs is rising, crowdfunding initiatives are numerous and corporates are scaling up their support for and investments in startups.

It is becoming  clear that startups need more than general business support or cool office space. The whole startup ecosystem being created around the startups has lost its sexiness and there are more and more comments from the startups that they aim to focus on their business only, not getting distracted by accelerator pitches, new rankings  or fancy offices (as stated by catawiki last week). Recent research from Deloitte shows that in order to become a successful startup (as you have the odds against you when you’re a startup), you need:

In addition we would like to add that in order to scale up you need to address a market larger than the Netherlands and less fragmented than Europe. In that case it makes more sense to actually move your HQ to the US (like HackerOne did, which moved its HQ to California).

Startup Delta has been an excellent initiative to get all noses pointed in the same direction for the Netherlands. The startup Delta has benefitted for a large part from Neelie Kroes’ reputation, knowledge, expertise and her network. With the job done and the main goal achieved, Kroes can now continue with Salesforce to address other near and dear topics (e.g. coding and women in tech).

Whether Startup Delta has been able to create a more entrepreneur friendly environment  remains debatable. At the same time it remains debatable whether we really need to make things as easy as possible. In the US, more startups fail at an earlier stage, leaving more room for the high potential ones to actually scale up.