The number we are looking for is the value of all buying transactions of businesses based in the Netherlands which we will refer to from now on as Dutch business. For this we use CBS’s company financial statistics. According to these stats the total net purchases of Dutch businesses in 2013 equals € 858 billion. For 2014 the total value for intermediate goods and services was -0,3% so we can savely assume that the B2B purchases in 2014 were the same as in 2014.

Using other countries as a proxy leads to a Dutch B2B e-commerce size that varies from € 35 billion to € 198 billion. At best these numbers can be used as a lower and upper limit of the Dutch B2B e-commerce market size. Using sales value instead of purchase value also flaws B2B e-commerce approximation methods. Moreover, using a sales transaction approach tends to underestimate e-commerce in export oriented countries such as The Netherlands.

A better method is to stick to the CBS data. Our total B2B purchase number for 2014 of € 858 billion excludes agriculture excludes agriculture, finance, real estate, government, education and healthcare. Government and most of the education sector are not counted as businesses. To correct for finance we use their sector production number of € 97 billion in 2012 as a proxy to their net revenue and subtract the sector value add of € 48 billion. The result is an estimated 49 billion B2B purchase number. To correct for agriculture we assume the sectors purchase value to equal to 60% of the sectors revenue, adding an additional € 17 billion purchase value. For healthcare and real estate, we assumed a purchase value of 25% of the sector’s turnover resulting in an additional € 26 billion. The corrected purchase value of the Dutch economy in 2014 therefore equals € 949 billion.

As of 2010 Dutch CBS decided to change the questions related to B2B purchases and asked companies if they purchased < 1%, <2%, < 5% , < 10%, < 25%, < 50%, or >= 50 % of their total purchases electronically. As a result B2B e-commerce came dramatically down after the 2009 high of € 131 billion. Apparently CBS felt they were overestimating B2B e-commerce and tried to get a more realistic view on the size of the market by offering respondents pre-defined classes. With these redefined survey questions it is difficult to come up with a good estimate because the chosen percentage classes leave too much room for correctly assessing the class average. Nevertheless: 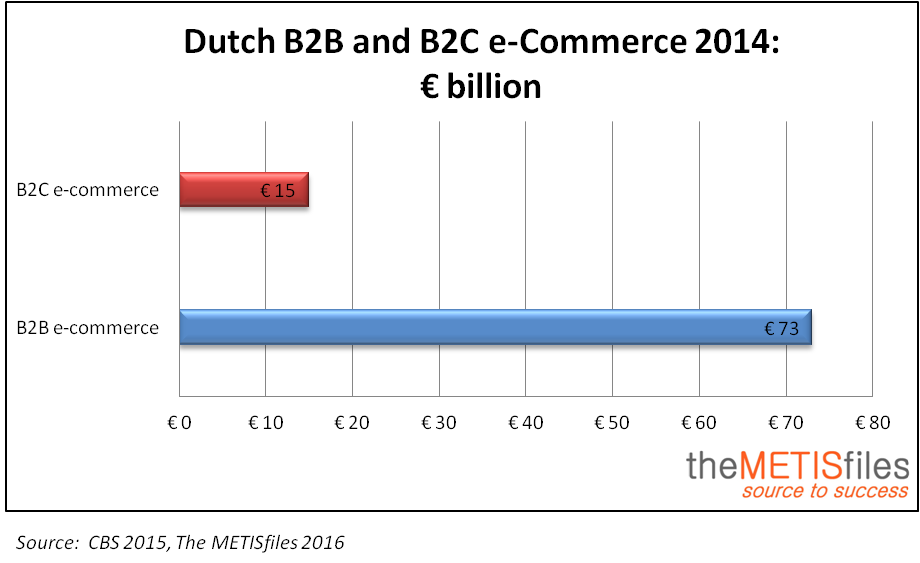 The reason the B2B e-commerce market is so large when compared to B2C is caused by the value chain effect of production and trade processes: the metal to produce a bolt for the engine of a car involves at least four (but probably more) transactions before it reaches its final destination. All purchase transactions and associated value are part of the total B2B e-commerce market size, including purchases made abroad. 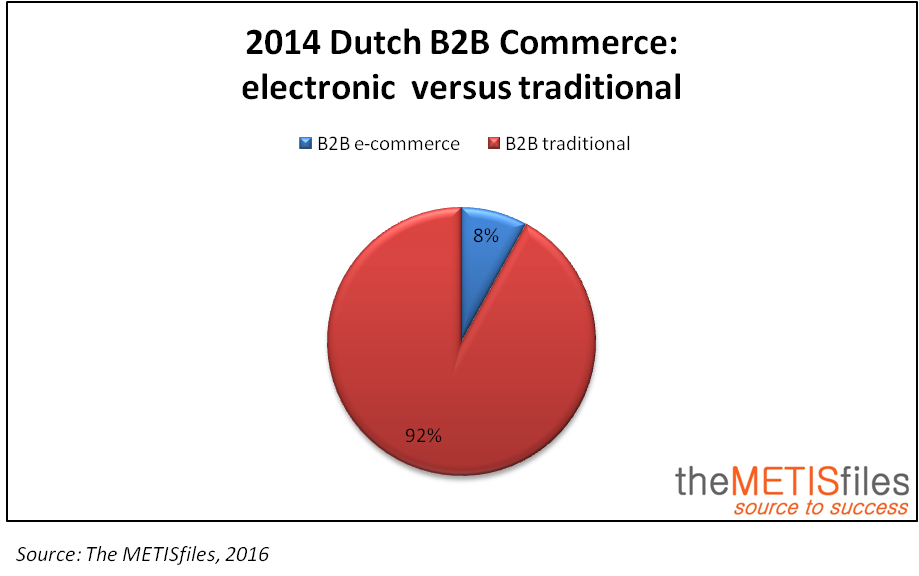 As a result there is a second conclusion that can be drawn: the total addressable B2B e-commerce market depends very much on the economic structure of a country. Economies that tend to stand at the top of the food chain, i.e. producing final goods and services, can be expected to have relatively higher B2B market sizes than economies with economies based on intermediate goods and natural resources. Economies generating more complex final goods (i.e. the German car industry) tend to require more input or intermediate products and services and therefore can be expected to show an even higher B2B e-commerce market size.

The final conclusion that can be drawn regards the future of B2B e-commerce. While the future of B2C e-commerce depends on the growth of consumer spending and its ability to convert analogue commerce into digital commerce, B2B has an additional growth driver. B2B e-commerce is not only driven by economic growth and its ability to digitize current B2B commerce but can also expect to grow its future potential. As companies continue to outsource non-core activities, B2B e-commerce benefits in two ways. First there is the effect of converting internal to external value chain spending causing the size of B2B commerce to increase. Secondly there is the effect of managing the increased complexity of the value chains which will drive the use of B2B e-commerce technologies giving an extra boost to B2B e-commerce. So while B2C e-commerce is capturing most attention it is the B2B e-commerce where the real action is.