Businessmen, futurists, ICT evangelists, economists and even some politicians are wholeheartedly embracing digital transformation and the digital economy as the future for country, society and economy. And they agree that more should be done to facilitate that future. Unfortunately measuring the impact of digital transformation and sizing the digital economy proves to be tough as the impact of digital technologies and data on our society and economy is yet to be fully understood. That is bothersome as you can’t improve or facilitate what you can’t measure. So let’s start easy. Part of the digital economy is e-commerce and is much easier to understand and measure. Or is it? 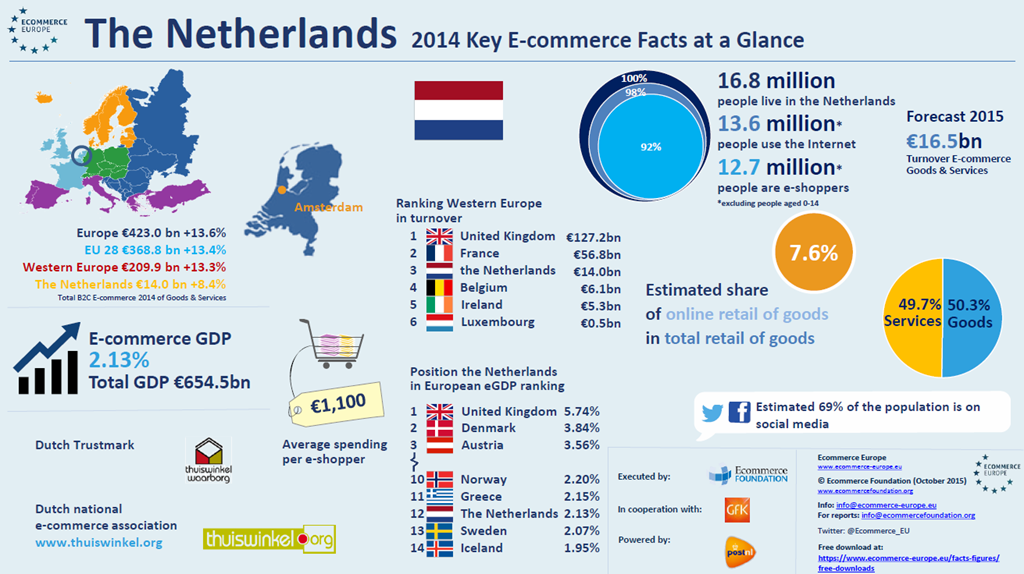 e-Commerce is generally defined as the trading in products or services using computer networks, such as the Internet. Sizing is being done by summing the value of all electronic transactions of the goods and services that are electronically traded. The sizing includes B2C and B2B. The B2C part is usually referred to as consumer e-commerce. For practical reasons the year that Amazon started selling each and everything online, 1995, can be regarded as the start of e-commerce. Since then payment methods and web interfaces have evolved to give consumers a smooth buying experience, security standards have been introduced to prevent fraud and theft, and mobile devices and apps have emerged to facilitate mobile e-commerce. All this took twenty years and resulted in our current consumer e-commerce experience.

Measuring the relative progress of consumer e-commerce only makes sense if it relates to the same type of quantity i.e. e-transaction value against total transaction value or e-value add against total value add. GDP calculation, using the expenditure approach, includes consumption, investments, government spending plus exports minus imports. Obviously government spending, imports and exports as well as investment should not be part of consumer spending. Consumer e-commerce should be related to total consumer spending. Fortunately CBS not only calculates Dutch GDP but also Dutch consumer spending which totals € 294 billion for 2014. This number should really be the starting point when measuring the progress of Dutch consumer e-commerce.

Now that we are comparing apples to apples we can conclude that the relative size of consumer e-commerce amounts to 4.7% of all consumer commerce. Although twice the size of eGDP this number is still remarkably low. There are, however, some factors that negatively influence the relative size of consumer e-commerce. First, not all consumer spending is included in the €14 billion. GfK, who runs the Dutch consumer spending monitor, does not include consumer spending at gas stations and pharmacies. It also does not include online gaming and gambling. Secondly, one could argue that the denominator -total consumer spending- overestimates what can truly be bought online: the total online addressable market. In 2014 Dutch housing consumption is €53 billion. Yet the question is whether the housing component should be part of the calculation. The number of housing transactions is just a fraction of a percentage of all consumer transactions but accounts for almost 20% of total consumer spending. People just don’t do many housing transactions on an annual basis.

For some other goods and services such as medical, food, water and energy, it is also debatable if it really belongs to the total addressable on-line market. If we would narrow down the total addressable market accordingly, consumer spending on goods and services will be close to €63 billion respectively €94 billion for 2014. If we further correct the missed spending in gas stations, pharmacies and subtract these from the denominator, while at the same time add online gaming (est. €700 million) and gambling (est. €300 million), the e-commerce percentage in the total addressable e-commerce market is close to 10%. For goods we are looking at 11.1% and for services at 7.4%.

After 20 years of online shopping experience these are still not earth shattering numbers and proof of how strong the analogue consumer market still is. As long as the majority of consumers still want to see, feel, smell, taste, try and haggle, the 10% consumer e-commerce share will continue to grow at a medium pace.

Products such as food and drinks are not yet popular online items. Nevertheless, grocery shopping is probably the next growth market for consumer e-commerce.

Finally we should also value the indirect effect that e-commerce has on the transport and delivery sector. Physical goods still have to be transported and delivered but the associated revenues are not part of consumer e-commerce revenues. While e-commerce will continue to negatively impact the offline economy the future of the analogue transport sector still looks bright.