Back in the days, a (semi-) professional football players post-football career was not as easy as it is now. After their active football career many went back to whatever trade they learned at school: plumber, electrician, clerk, etc. Some had the gift of ‘seeing’ the game and became coach or trainer. And there was the group of players that saved up some money to buy their own shop to guarantee future income. Most of them became a tobacconist or snack bar owner. Clearly the general assumption was that smoking and snacking were amongst a man’s primary needs and to satisfy those needs shops were required. Barriers to entry were low and the potential market big; a no brainer.

Times have changed. Smoking is not cool anymore and even though selling cigarettes is not (yet) outlawed most tobacconists have closed their shops years ago. Fast food on the other hand is still flourishing but the large hamburger chains and the local French fries joints have to share people’s fast food appetite with shoarma shacks, coffee shops, lunchrooms and ice cream saloons. However rising fast food demand doesn’t guarantee a solid financial future as it attracts more competition. It is getting crowded in fast food land and margins are increasingly under pressure.

Fortunately there is fresh technology to disrupt the sector. In 2013 we reported on the burger flipping machine that promised to ‘democratize access to high quality food making it available to the masses’. In the Netherlands startup Caenator is pushing the European equivalent of the burger flipper: the automatic French fries machine. Caenator calls it a ‘unique foodservice concept’, a ‘high tech vending machine that bakes tasty, crunchy, good smelling fries in real oil in just two minutes’. Needless to say the machine is aimed at gas-, bus- and railway stations. Caenator installs, maintains and repairs the machines and also takes care of the back-office activities and supplies. Commercially it is smart to offer a French Fries as a Service concept. It greatly increases the potential as every high street, beach club or low budget hotel can cater room for a few machines without too much hassle. 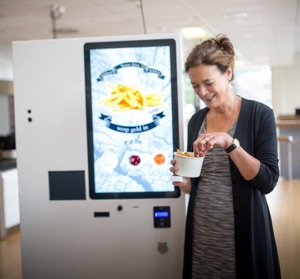 While at first it doesn’t seem to be an extraordinary innovation, rather a novelty, it does emphasize two important things. First, developing robots that prepare food has been far more complex than it seemed. Baking a simple hamburger or plain French fries requires a unique set of steps in the food preparation process that was, until recently, far too complicated for machines to achieve. This is rapidly changing. Second, the change we are witnessing is marking the beginning of a smart machine oriented fast food sector. As the cost of robots will further decline and their capabilities increase more complex dishes will enter the machine menu.

Of course the real reason for a more machine dominated food sector is to lower the sector’s labor cost for existing fast food outlets. Or as Momentum Machines co-founder Alexandros Vardakostas put it: “Our device isn’t meant to make employees more efficient, it’s meant to completely obviate them”. It is not clear if they have sold any machines yet. The website has piped down from its 2013 claim that its machine can do everything a human can but way better. Instead the company now just states that it “has great technology to make great multi-ingredient gourmets”.

Caenator takes a different approach. Instead of focusing on lower labor cost it wants to generate money by increasing fast food availability. Caenator also states it uses bio-organic oil in the frying process. This is probably an effort to green wash its French fries machine. Not coincidentally Caenator is supported by the Food Valley and the Wageningen University. But how the Food Valley’s mission of ‘working together on food and health’ fits with supporting a junk food machine remains unclear. Enjoy!

Is Big Brother Bugging You?
Industry no longer allows end-to-end players to be successful
Salesforce Partners – Rushed off their Feet