Rankings and scores always capture the imagination of people. They give you a bird’s eye view on a specific topic, a summary of the key results on a particular theme and therefore your best conversation guide at parties. For people that are directly involved in the specific topic there is a more important reason to check related short lists: am I on it and if so in what place? Being on a shortlist is about getting credits for one’s achievement (whether good or bad). For a nominee on a ‘good’ list (best writer, best company etc) recognition is however not the only thing that counts. Moreover being listed almost guarantees more benefits in the nearby future.

That is what StartupDelta actually hopes to achieve after witnessing the Amsterdam region entering The Global Startup Ecosystem Ranking 2015 at place 19. The ranking is based on criteria such as performance, funding, talent, market reach, and startup experience. The resulting index shows the 20 startup regions in the world where the above mentioned criteria are highest, largest, best or most. Being in the top-20 startup ecosystem shortlist could act as an accelerator for attracting entrepreneurs and investors as well as a motivator for policymakers to create an attractive startup business environment.

The top-20 is a useful summary in as much as it represents the worldwide where-abouts of the startup scene. Silicon Valley is of course number one. In the top-10 there are 6 US regions. The first non-US region is Tel Aviv (5th) followed by London (6th).

But all summaries have their drawbacks. The top-20 startup index doesn’t cover the potentially important startup ecosystems of Beijing, Shenzhen and Shanghai in China, Tokyo in Japan and Seoul in Korea. With the second, third and 13th largest economies in the world missing, the top-20 could miss out on some 25% of the startup world. For the list this means that 5 East Asian ecosystems very well could have ended up in that top-20. So the omission of South East Asia in the top-20 is actually good news for StartupDelta which finds the Amsterdam region just inside the Top-20. 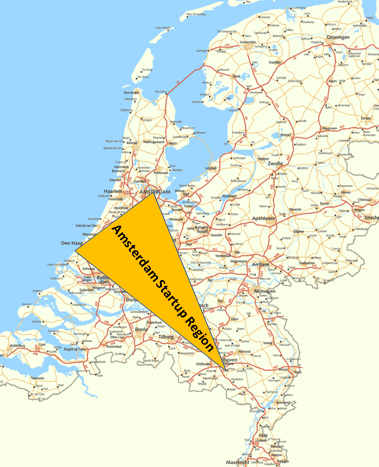 More good news for the Amsterdam region is that Compass, who compiled the index, has a peculiar vision on the geography of regions. According to the report the Amsterdam startup region covers the area delineated by the triangle of Amsterdam, The Hague and Eindhoven. A rather strange combination to define the Amsterdam region. A more apt description of the geographic startup distribution in the Netherlands is: a quadrangle made up of Amsterdam, The Hague, Eindhoven and Enschede. Moreover, without the addition of The Hague and Eindhoven, Amsterdam as a startup ecosystem would not have made it to the top-20.

Another issue with a top-20 is that we like to know who ended just outside of the top-20. Or for that matter: which regions were actually considered in the long list and why is the researchers opted for a top-20 instead of a top-10, top-25 or top-50. The report does mention the runners-up but not how they stack up. It would be very encouraging for other startup regions to know where they stand and what they need to improve to get a higher score.

All in all the list is a nice effort to show a general picture of startup activity worldwide (minus South Asia and Africa) but its usefulness other than PR is questionable. Local startup and would be entrepreneurs already know where the startup action is. Investors need and probably have a lot more information on startup activities, likely also on regions that are not listed. Policymakers are very much aware of what can be done to lower the local barriers for startup businesses as ample research has been carried out on creating a favorable business environment.

So why the list? Apart from Compass own PR maybe the purpose can be found in the top recommendations of the report for start-ups: move your HQ to Silicon Valley and open a second sales office in New York City to get access to the US market and its many big potential customers. Conspiracy thinkers would immediately identify the US government as the sponsor.