Most of the 3 billion worldwide internet users are not exactly fans of ads popping up on the websites they visit. Over the last 5 years they have turned to ad blocking software to make web browsing bearable once again. A recent report from Adobe and Pagefair (formerly known as BlockMetrics) suggests that 200 million internet users are currently using some sort of ad blocking software. The report also states that ad blocking software will cost publishers $22 billion of revenue this year. The last number is based on a publisher’s number of page views, visitors using ad block software and CPT (Cost Per Thousand impressions). This presents a direct problem for publishers as most of them use an ad based revenue model. Now this model is under pressure as it turns out (surprise !) that internet users don’t really like ad covered screens. 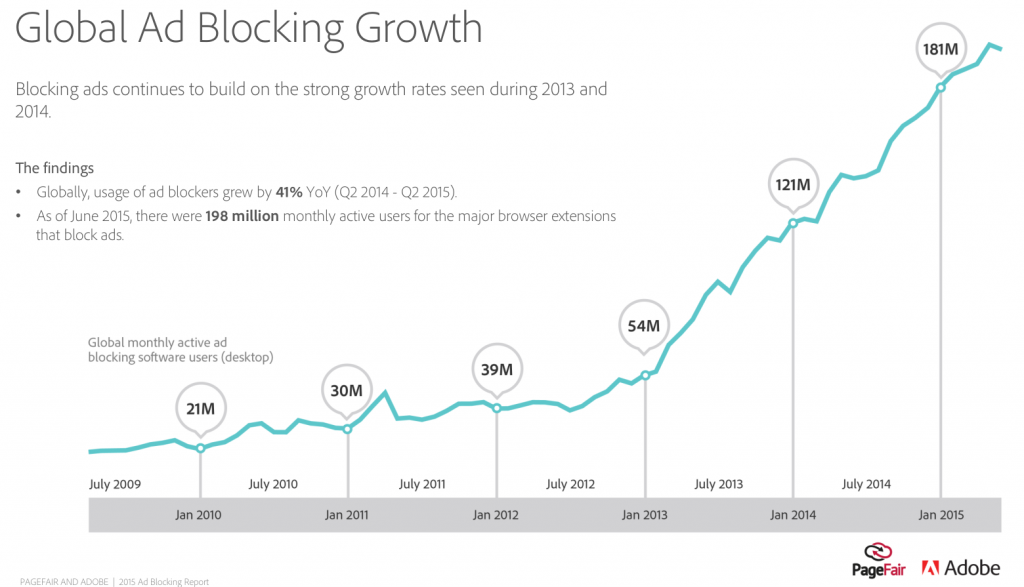 But displaying ads is just one nuisance. Online advertising goes way beyond traditional offline advertising. It is also the whole ad tracking process that annoys people. Reading the content of a webpage usually takes up less than 100 kb. However, to view popular magazines and newspapers you may have to download an additional 1 to 10 Mb for all the unwanted stuff, mostly consisting of dozens of third party JavaScripts – including spyware, bloatware and sometimes malware from infected ad servers – and image files. Downloading this heavy pageload requires more time and device resources resulting in unwanted adds and tracking information while also inadvertently allowing potential security breaches.

The performance issues related to rendering time for images, the network requests and third party scripts for PCs are minor. For mobile phones, increasingly the preferred way to communicate, it is a problem as heavy load websites slow down performance and may drastically eat into your dataplan. The ad blocking war between publishers, the advertising industry and software developers on the one hand versus internet users and ad block software developers on the other hand is heating up in the mobile space. Companies as Eyeo with Ad Block Plus and Shine, an Israeli start up that develops ad block technology for mobile operators, are in an arms race with Pagefair, an Irish company that develops ad block detection software Sourcepoint, founded by former Googler Ben Barokas who claims to have the technology to rip through all the ad blockers.

On the side there is of course an ongoing discussion whether using ad block software is ethical or mere theft. The point being made by publishers is that they give you the content for free and therefore you have to endure the ads. Users claim that publishers are responsible for their own ad business model and adds can not be forced upon them; especially if the downloaded adds substantially eat into their monthly data plan. It is a fruitless discussion as both groups have opposing objectives when it comes to ads.

But whichever way you look at it, ad blocking is moving into a new phase. Ad blocking software is usually delivered as a free browser plugin. However, even companies such as Eyeo need to make money. Google, Amazon, Microsoft are allegedly paying up to be white listed. Users on the other hand, Eyeo claims, can still opt out of non-blocked ads from the three giants but have to manually black list them again. It raises the question whether ad blockers can really be trusted if they can charge advertisers for white listing them.

In the mean time Apple has started to allow ad blocking on its iPhones and iPads in iOS9. Mobile advertisers now have become afraid that soon they will be cut off from mobile Apple users. Interestingly, Ad Block Plus could also be rendered useless if Apple’s Safari and iOS delivers on its ad blocking promise. With Apple, the mobile ad block war just got even more interesting as the advertising ecosystem just got more complex.

A tit for tat approach is emerging with technologies that promise to take care of ad blocking software all together. Sourcepoint no doubt is welcomed and maybe even sponsored by the publishing and advertising industry. Whether it can deliver the goods remains to be seen. But at the end of the day, and if they do deliver, it will just offset the next stage in the ad block arms race and cause a new range of software: blocking software for ad block blockers.

Cloud for Europe, Europe for Cloud
Four Scenarios for Digital Europe: Are We Ready?
Operational Deployment Models: From In House To BPO
Share and Enjoy: