Clearly we were wrong about why robots are so hot today. We thought that since robots are so superior in terms of speed and precision when it comes to executing routine tasks they are regarded by businesses as excellent replacements for an increasing number of factory and desk jobs. As of late they can also carry out more complex manual work such as flipping burgers and guarding prisoners. The big bonus for companies is of course increased productivity and no labor taxes on robots.

In a study from Carl Benedikt Frey and Michael A. Osborne called The Future of Employment: How susceptible are jobs to computerization? the authors estimated the probability of computerization of current occupations and reached the conclusion that 47% of the total US employment is at risk of being automated. The study also provided a detailed list of 702 jobs and their probability of being automated. The graph below, based on the paper, shows the safest and the riskiest occupations with regard to employment opportunity. 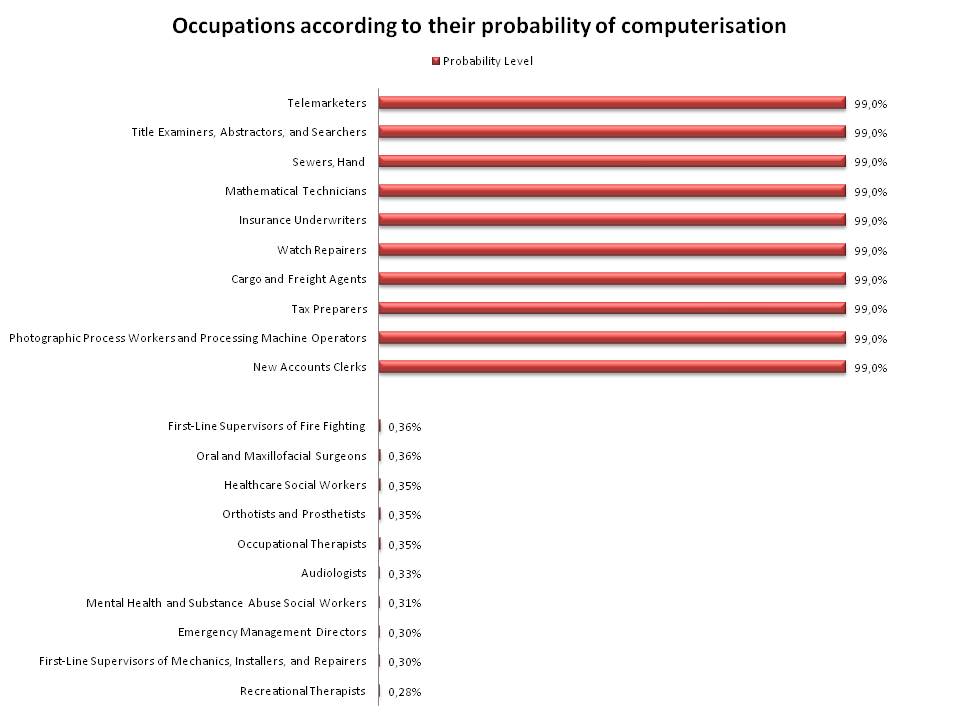 Desk jobs are definitely not a good choice if your income depends on it. Telemarketers rank highest when it comes to chances of becoming extinct but any occupation in the top-10 doesn’t stand much of a chance. Agreed, there will be mechanical watches and clothes to be repaired and these occupations will be filling a much sought after niche for decades to come. But it will not be something the majority of our future workforce will be engaged in.

To pick a more or less safe occupation something in healthcare will be a good choice and, yes, we will always need firefighters and other people that can handle situations. The safest pick will be that of recreational therapist. The study shows that there is a 0.28% chance that this occupation will be automated.

The research paper however was published in 2013. The authors were not to know that Aldebaran recently released a robotized recreational therapist: Pepper. Pepper is “the first humanoid robot designed to live with humans … an emotional … interactive and evolutionary companion”. Some sort of private recreational therapist. While one may wonder whether Pepper or for that matter other humanoids could replace humans for companionship: the first 1000 Peppers were sold within the hour. Does that mean we don’t like robots because they take our jobs but do prefer their companionship above that of real people? If that is true a lot of other “safe” occupations such as healthcare social workers, occupational therapists or mental health social workers are endangered species too. Firefighter is probably best. We need more arsonists.

Rackspace Shocking News: Dutch Businesses Invest Heavily in Big Data
I am sorry Dave. I'm afraid I can't do that.
Slate 8 Is Late … And Just In Time