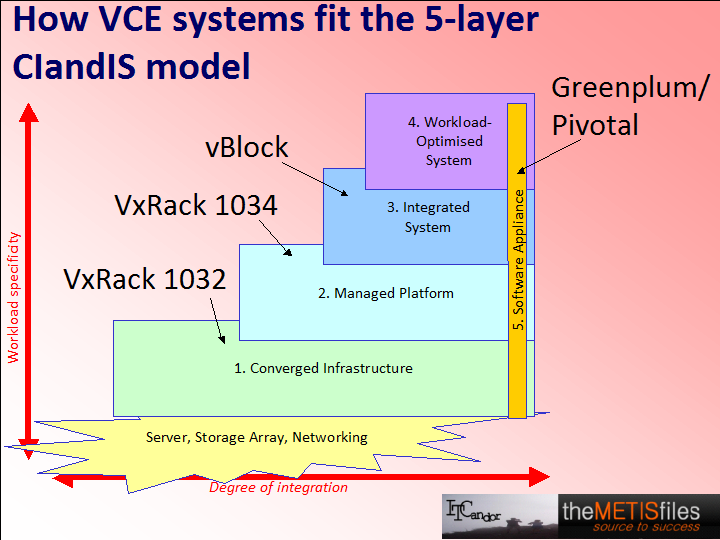 This week VCE introduced the VxRack – a rack-based addition to its converged infrastructure and integrated platform vBlock machines, expanding its participation in the CIandIS market from 2 to 4 of the 5 layers (see Figure). The 2 new VxRack models are:

Both new machines will be available in Q3. They both connect to VCE’s newly announced Vscale architecture and are supported by its VCE Vision software, which can be used to build a unified data center architecture spanning multiple locations and countries. VCE Vision software is said to collect ‘release compatibility matrix (RCM) data, system health checks, and performance thresholds or other indicators at the data center level’, creating a software object model of all the code running across the system. This can then exported as a Management and Orchestration (M&O) model to run on Cisco’s One Suite or VMware’s vRealize and/or attach to systems management software such as HP OpenView or Microsoft system Center through its APIs. It’s a long stride towards Software Defined Data Center (SDDC) for VCE.

Back in October last year EMC took a controlling interest by paying Cisco to reduce its share in VCE from 50% to 10% and VMware (owned 60% itself by EMC) became more important within the mix as a result. So in future I expect that VCE will follow VMware’s NSV view of SDDC more than Cisco’s ACI. At the moment, however, Cisco remains the exclusive physical network partner for top-of-rack switches; its Nexus 9000 switches are also integrated into vBlock 720 and 340 systems. As far as I can tell its compute nodes are still central to VCE systems as well. So it’s likely that VCE’s inevitable movement towards VMware – as shown in the introduction of the VxRack 1034 – to be part of a slow move away from Cisco than a quick divorce.

What will this do for VCE’s share of the market?

VCE has been the most successful vendor in the layer-3 ‘Integrated Systems’ layer, having shipped around 3,000 vBlocks to date since their launch in 2011. However the partners have had varying success in getting their components used in other CIandIS offerings – VMware’s virtualisation and hypervisor products have been used almost everywhere, while Cisco’s switches, compute nodes and UCS Director software are used products using NetApp (Flexpod) and now IBM (VersaStack) storage. EMC has been less successful in having its storage used in other systems, despite its leadership of the storage systems market.

I expect VCE will use these new rack-based systems to address the branch and remote offices of its existing (typically large) customers. It’s less likely to find big business in selling them to SMBs. It should also allow it to shift the balance of its business more towards Enterprise customers from the current 50:50 split with Service Providers.

The 1032 will allow VCE to address the growing demand for OpenStack products and diversify away from its current reliance on Cisco and VMware approaches to integrated systems. Here it will begin to compete with HP Converged System, Dell FX and Lenovo Pure Flex machines.

I – for one – am not entirely convinced about the prospects for ‘hyperconverged’ systems. However most x86 server vendors have announced EVO:RAIL systems, while Dell reports significant progress in selling Nutanix appliances. If the market does develop rapidly the 1034 should be well positioned to take a significant share.

Why do we need separate CIandIS systems?

Perhaps the most important question to ask is ‘Why should vendors continue to differentiate between ‘converged’ and other system types?’ Surely there’s a wide requirement for servers, storage and networking to be integrated, addressable, orchestrated and managed easily and the more modular machines become, the more hardware elements become like Lego pieces to be fitted together….

The reason is … there are still too many choices in the type of server, storage, networking, hypervisor, operating system and systems management to use. The challenge for the integrators is to build something that will meet the needs of the majority, while keeping an eye on new technology (flash memory for instance), standards (OpenStack, Open Compute, OpenFlow) and application style. Docker is a particular challenge because it does away with the traditional need for hypervisors altogether. VCE’s announcements today will expand its reach into new types of system, while allowing EMC a greater control of the mix of components it orchestrates.

Prison Guards Terminated
From Unified To Social Communications And Collaboration
Personal Cloud: Is It Safe?