In our previous blog we calculated the Dutch Gross Domestic Digital Product (GDDP) at € 129 billion almost a quarter of GDP. However this is only the direct effect of ICT on the Dutch economy.

In our Digital economy model we can distinguish the following impacts:

Summing up the direct, indirect and induced effect of the digital economy would give us the Dutch Digital Footprint. 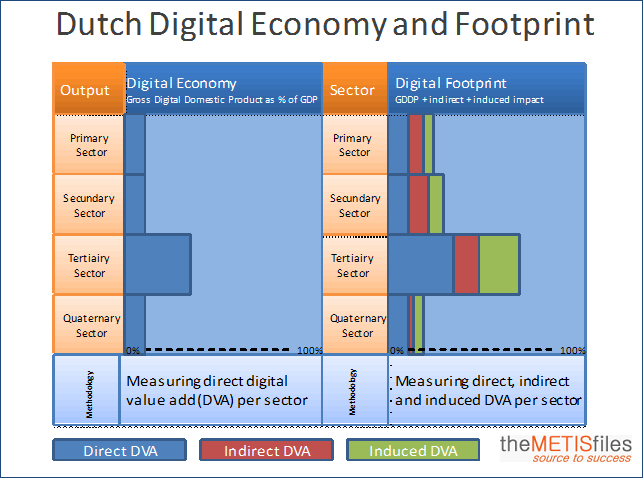 To do this exercise correctly we need to apply the input-output numbers from the Dutch Central Bureau of Statistics(CBS). The last CBS input-output table dates from 2012 and will serve as the base for our calculations. Following Leontief’s input- output analysis we can calculate the indirect and induced impact of ICT for the Dutch economy: the ICT multiplier effect. While the CBS shows input output transaction data for 76 different sectors, we will limit our calculation to 4 sector categories for reasons of simplicity:

At a later stage we will segment the Dutch digital economy into 76 sectors to come up with a more precise Digital Footprint.

The outcomes of our Digital Output model shows a total Digital Footprint of €281 billion. This is more than twice the size of the Digital Economy of €129 billion. The ripple effect generates and additional € 152 billion.

This first sizing of the Dutch digital footprint using Leontief’s input-output model clearly shows that the impact of ICT is far reaching. Moreover it adds up close to 50% of Dutch GDP.

It is also clear that large differences exist between sectors. The commercial services sector total DVA (direct + indirect+ induced) is more than 75% of the total Gross Value Add and more than a third of our total GDP. At the same time we notice the non-commercial quaternary sector falling behind in term of digital footprint.

The METISfiles is planning a series of reports that will chart the Dutch Digital Economy on a sector by sector basis. If you are interested in these forthcoming reports please contact Simone de Bruin for additional info.