Last week’s Microsoft event in Redmond contained mostly consumer centric news. Free upgrades to Windows 10 and the Hololens were the stars of the event. Nadella probably saves the business stuff for later. So nothing on the Microsoft cloud or where Azure is heading for. Nevertheless there was a sound bite that almost drowned in the consumer noise. Microsoft ran a blog announcing that it had agreed to buy Revolution Analytics.

Revolution Analytics brands its self as “the leading commercial provider of software and services based on the open source R project for statistical computing”. It develops open source versions of the free and open source software programming language R which is specifically aimed at solving problems in computational statistics, data visualization and data science. No details were revealed on the financial part of the acquisition.

Joseph Sirosh, Microsoft’s corporate vice president for machine learning, motivated the acquisition as follows: “We are making this acquisition to help more companies use the power of R and data science to unlock big data insights with advanced analytics,”. 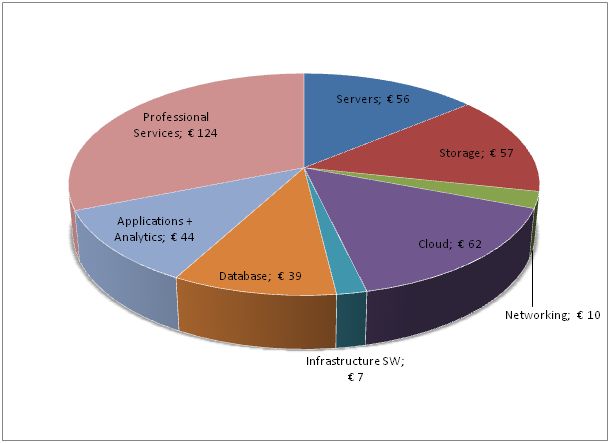 R is quickly gaining traction with data scientist and in the academic world. With the acquisition of R Microsoft tightens the relationship with these stakeholders who typically sit at the innovation edge of Big Data. But R is also a welcome addition to Microsoft’s already broad Big Data portfolio. As an open source development tool it offers an interesting alternative to the available commercial closed source solutions of SAS, Minitab or SPSS.

But perhaps more important is that the acquisition strengthens the attractiveness of Microsoft’s Azure cloud platform that already offers an Hadoop-based cloud service. In the light of Microsoft’s 2nd quarter earnings it is key for Microsoft to keep the momentum of its cloud transition going. With cloud revenues growing at 116%, Office 365, Azure and Dynamics prove to be strong cloud solutions that can drive Microsoft’s revenue forward. To sustain the momentum Microsoft needs to further beef up its Azure platform with its Big Data portfolio. Speed is crucial as Microsoft’s revenue will almost certainly take a hit with the release of Windows 10 later this year and the promised free upgrade for Windows 7 and 8 users.