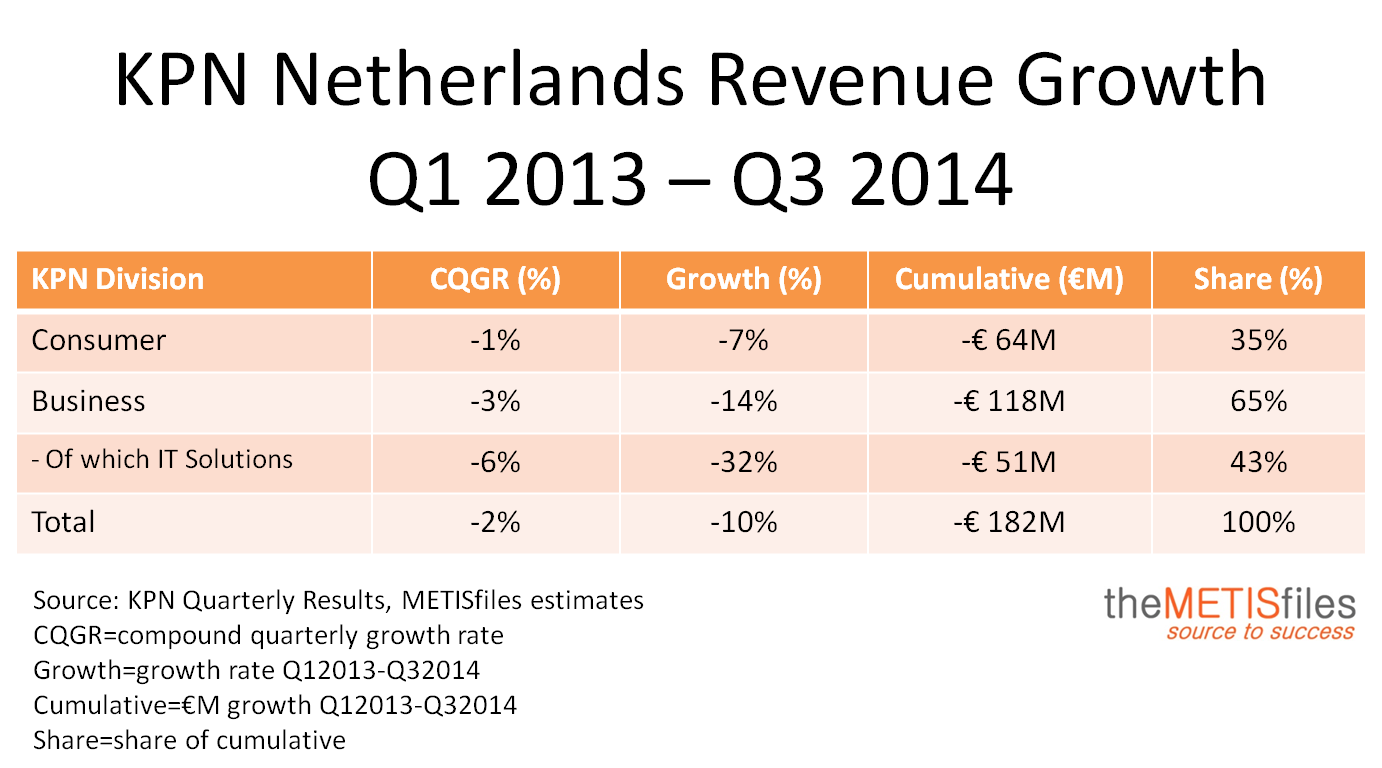 It came as no surprise that last week KPN announced it is restructuring its business services division. KPN says its customers are moving to less labour intensive IP solutions and increasingly demand new services such as cloud & hosting, security and M2M solutions. At the same time, because of the depressed state of the economy, Dutch businesses are downsizing, closing branch offices and rationalise ICT spend as a result.

KPN is performing worse than the European average. Also last week, The European Telecoms Network Operators’ Association (ETNO) published a report that calculates a 4% drop in telecom revenues in Europe in 2013 and a 1.8% drop in 2014.

The restructuring plan is twofold. First, KPN is looking to cut costs, reducing its business services workforce with 580 employees, second KPN wants to invest in new services and improve the quality of the existing services.

Over the last couple of years KPN has already invested in new cloud services such as Software Online, CloudNL and Grip. Also, KPN recently acquired hosting provider Argeweb and cemented a deal with AMSIO to connect to AMSIO’s Azure Pack platform and Softlayer to use the Softlayer public cloud infrastructure for KPN customers that are looking for a standard public cloud offer other than CloudNL. KPN also introduced the ZorgCloud for healthcare customers this year and collaborated with Tech Data and HP in the TD Cloud initiative. However, none of these investments have had the desired effect yet because the revenue effects have been too small to offset the decline.

Another measure KPN has taken has been the launch of KPN Alles-in-1, KPN Compleet and KPN Een for the SOHO and SMB markets. Just like in the consumer market, these multiplay bundles are designed to lock in users to KPN’s wireless, fixed and cloud business propositions. As of Q3 2014, KPN enjoys an installed base of 257,000 business multiplay seats, up from 47,000 a year earlier (source: Q3 2014 results). The multiplay propositions ensure increased customer stickiness but do nothing to increase revenues in the short term. In fact, business wireless revenues have dropped from € 241 million in Q1 2013 to € 205 million in Q3 2014, making it responsible for 31% of the cumulative revenue losses of KPN business services.

In summary, KPN Business is hurting, but it is the IT Solutions business (IT and application services) which is hurting the most. Without IT Solutions, KPN Business would have lost a cumulative amount of € 67 million over the last seven quarters, equal to the revenue loss of the consumer division. We believe the announced restructuring will do nothing to stop the revenue decline when KPN is unable to find synergies between IT solutions and its fixed and wireless play that will increase the topline. Playing the “Orange” card as a trusted provider of local cloud solutions will not be enough.

Future Of The Desktop: Software Defined Workspace
Who Is Afraid Of Microsoft And Skype?
KPN’s Q2: Mixed Bag