When Apple launched its iPad in 2010 a new device market was born. With Apple’s success competitors soon launched their tablets. It appeared that the PC was to be replaced by the tablet. Of course it was not, as we explained here. But after a few years of triple digit growth the appetite for tablets now seems to fade and one wonders if the curtain is already falling. Dutch tablet shipments are expected to show just single digit growth in 2014. At the same time PC shipments are somewhat on the rebound: the Dutch PC market – after three consecutive years of decline – is expected to grow between 5% and 10% in 2014. Explaining the reasons of the slowdown of the tablet market we have to look at a classic combination of market penetration, replacement cycles and functionality.

In less than five years close to 5 million tablets have been sold in the Netherlands. The fact that over 90% of the tablets can be found in consumer households plus that they are more frequently shared within these households puts an initial cap on further penetration. At the same time, businesses have not yet shown a big appetite for large scale tablet implementation.

While initially a tablet was expected to be replaced in 2 to 2.5 years this clearly has not happened. Most new tablet shipments still find their way to first time buyers. Already this leads to a much longer refresh cycle. Life expectancy of a tablet has now gone up to 3 to 4 years. Apparently for most people tablets are a nice-to-have device compared to smartphones and PCs.

Smartphones can do everything a tablet can and are more mobile. Since you don’t go anywhere without your smartphone it clearly is a need-to-have. With smartphone screens now up to 6 inches these are potential tablet killers in the 7 inch and 8 inch screen tablet segment. At the same time, smartphones also experience longer refresh cycles. Smartphone innovation is increasingly software rather than hardware based and together with a growing trend to sim-only subscriptions, the smartphone replacement cycle lengthens.

The PC is a lot more productive than the tablet. PC replacements are still important and compete with tablet replacements. PC life expectancy in the mean time has increased to 4 years for laptops and 6 years for desktops.

All three replacement cycles now take longer, negatively affecting tablet shipment growth. Since the bulk of tablet shipments happened in 2012 and 2013, the start of a refresh cycle can be expected as early as late 2015.

After the tablet became an instant hit in the home it was expected to soon find its way into the business market. So far it has not happened. Even though magazines and newspapers report favorably on business tablet adoption (here, here and here), global research agencies claim business tablet shipments are currently still less than 10% of overall tablet shipments. There are some good reasons:

Tablets getting ready for second stage 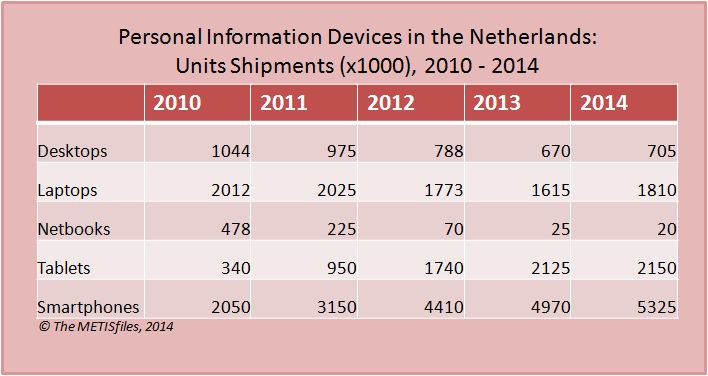 A very large part of the potential market has not yet bought into tablets. Tablets are regarded either as not mobile or not productive enough. But that will change. Phase one of the tablet market is about to end, giving way to a more mature market. We anticipate a lot more product, pricing and market segmentation. In particular we expect to see more low priced tablets purely aimed at information consumption. Small screen tablets, typically aimed at consumers, will be facing increasing competition from 5 inch and 6 inch phablets, effectively putting a limit to initial consumer tablet penetration. We do think however that a new generation of premium priced commercial tablets with the ability to handle PC-like workloads will help drive business tablet adoption. The emerging high end-business tablet market will receive stiff competition from convertibles, ultra thin and ultra light PCs. Finally a new market segment will arise as job specific tablets find their way to categories of employees that never had a PC before. The work of nurses, truck drivers, factory floor workers etc, will become increasingly information driven. The tablet is suited well to facilitate this.

Dropping growth rates are not a prelude to the end of the tablet market. On the contrary, the concept of the tablet and app proves to be a winning combination that is still in its infancy. We have only witnessed a rocket start of a tablet market which is now getting ready for business. We expect the tablet market will grow at a much slower pace than in the previous years but still at a (low) double digit level. This is still much higher than growth rates of the PC and smartphone market.

Four Scenarios for Digital Europe: Are We Ready?
Mainframes, Myths and Manpower
FUD