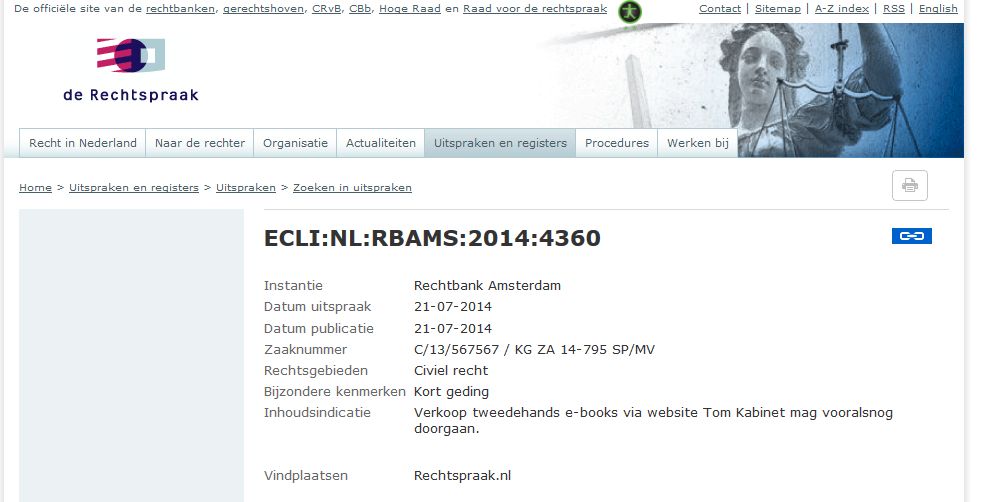 Amsterdam Court ruling on the Tom Cabinet case:”Selling second hand e-books through the Tom Kabinet website may for now continue”

A month ago we wrote about the second hand e-book site of Tom Kabinet which was accused  of copyright infringement and supporting e-book piracy by the Dutch Trade Publishers Association GAU.  Although odds were against Tom Kabinet in the court case, the verdict was favorable. The Amsterdam district court decided they could not approve the request of the GAU to shut down the Tom Kabinet website. The ruling however was not a fundamental one in the sense that it ruled on the principle of exhaustion of digital content, as was the case in the EU ruling of the UsedSoft versus Oracle. The court did not think the UsedSoft versus Oracle case was fully applicable in this case and that the scope and meaning of that ruling for e-books should be further investigated. As a consequence the court suggested to submit an application for main proceedings in the Hague to get to a fundamental ruling. As for now the court stated that Tom Kabinet is not operating unlawfully. The court also weighted in the fact that the GAU had not in any way responded to Tom Kabinets offer to discuss the issue. The blunt do-or-die attitude from the GAU clearly backfired. But that may just have been what they wanted.

What is clear is that the court acknowledges that e-books, and more in general  e-content does present an issue that our current legal system is not entirely familiar with. And even though the UsedSoft-Oracle case doesn’t fully apply, there is not much other case law to go on. As such it makes sense to move it to a higher court and get a more fundamental ruling. It could take one or two years before it gets to the Court of Justice of the European Union (CJEU) but sooner or later we will get some more legal guidance on the nature of e-content. Don’t expect that this to be a Roe versus Wade case. It just might landmark the start of a lengthy process of developing directives, policies and law around e-content as still much is unclear about the legal status of digital content. In that respect main legal proceedings and case law development are long overdue. In the mean time Tom can move on with his operation.

Does Cisco CloudVerse Rhyme?
Salesforce Partners – Rushed off their Feet
Vodafone and the Enterprise Cloud