Last year The METISfiles reported on the ongoing transformation from a traditional to a digital economy. But as the term ‘Digital Economy’ is increasingly used as a desired direction of our economic destiny we still have not much of a clue what it actually is. Most publications on this topic refer to a narrow concept of the digital economy: the production of digital content. As a result only activities that lead to digital products and services contribute to the digital economy. It certainly makes for a clear distinction from the non-digital economy and it also offers a relatively simple way to size the Digital Economy.

But by only looking at digital products and services we close our eyes to the phenomenal impact of digital technologies on the rest of the economy. As we showed in our previous blog on the digital economy, our traditional economy is increasingly touched, affected, supported, enhanced by and depending on digital technologies. For example, online sales of white and brown goods would come to a standstill if the underlying ICT infrastructure stopped working. So while the transaction of a physical good is regarded as part of the non-digital economy, the transaction itself but also fulfillment, after sales, administration etc. are business processes that are highly digitized. In other words, an increasing part of a company’s value chain is driven by ICT and as such adds value to a product or service even if the end product or service is not digital. 3D printing is not part of the Digital Economy since the printer clearly produces physical products. But as digital processes are at the core of the printed product it is hard to see why 3D printing should not be included in the sizing of the digital economy. The same can be said for emerging initiatives such as e-health, e-government and e-learning. The ‘e’ represent the use of digital means to redesign a traditional activity to 21st century consumer and business requirements. 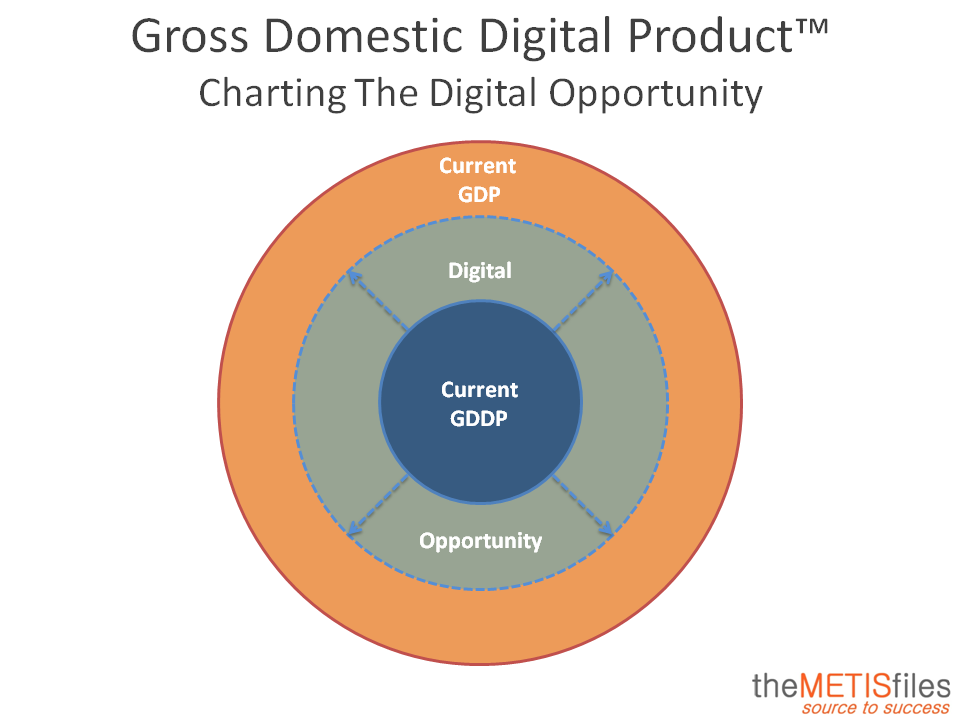 There is another reason why the digital economy should be defined in a much broader context than just the production of digital goods and services. In most discussions about the digital economy digital goods and services are the visible result and therefore the star of digital innovation. Much less visible is the ongoing digitization of business processes. In the value chain of companies, digital technologies are driving innovation in business processes, go to market strategies and business.

We therefore plead for a much broader definition of the digital economy that not only captures digital goods and services but also incorporates the gross value-add that is created within the value chain by means of digital technologies.

So the digital value add of a car manufacturer would for instance include all software and software driven parts of the car but also the added value generated by digital technologies during the production process. In doing so we are able to start measuring the true impact of ongoing digitization in the economy. It will also show a better insight into the digital impact and opportunity on a per sector basis.

Measuring the digital economy should therefore not be limited to the total value of produced digital goods and services but rather the sum of all value add of products and services that is generated through the use of digital technologies, in short, the Gross Domestic Digital Product™ or GDDP (see Figure above).

As a consequence it doesn’t make sense to distinguish between a traditional economy on one hand and a digital economy on the other. It would be better to look at how digitally driven or enabled  an economy is. After all the whole purpose of  the digital economy mantra is to urge economies, sectors and companies to innovate in order to sustain or bring forth more welfare.

Next time: how to measure digital value add?