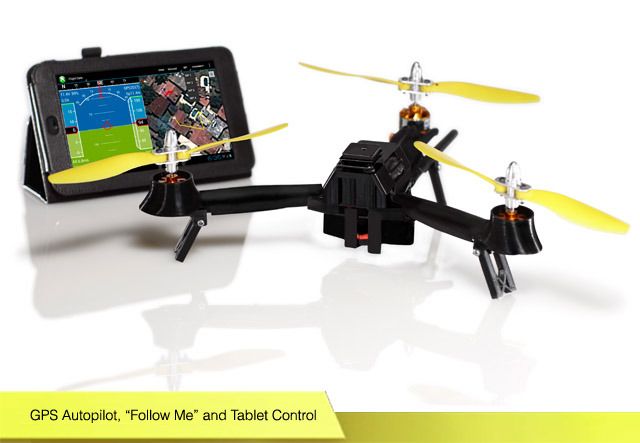 Yes, that’s right, BYOD gets a whole different meaning. Buying your own drone will soon be available for the masses. Kickstarter is well known as a platform for kick starting innovative and creative ideas supported by funding from the crowd. One of its latest projects is the Pocket Drone from AirDroids. The pocket drone is a small foldable multicopter than can act as your personal flying robot. It has a flying range of 20 minutes with a payload of 250 grams and sets you back only $500. The production will start later this year after a successful crowdsourced funding.

The consumerization of information technology certainly gets a new boost with this kind of project. Last year we reported on 3D printing being ready for the consumer market. Although only simple things can yet be printed security issues have arisen. It did not take long after 3D printing technology became more reliable and versatile before the idea of printable guns hit the media… and it did not stay with just an idea. Print your own gun is a reality.

Now drone technology is reaching the consumer. While the US military is using drone technology to build increasingly larger drones, consumers can now buy their own drone. So while the US Navy is investing in a very large, high altitude, long distance drone called Triton and developed by Northrop Grumman, the drone technology itself is now being adapted by technology start-ups such as AirDroids. The objective of the Pocket Drone is, according to Kickstarter, “to capture spectacular aerial images that open up a whole new perspective and insight that had previously been unseen“. It’s owner can use it for all kind of purposes such as recon your own estate or – for men – to have a peek what’s behind that hill before climbing it. Just imagine what a combination of Google Glass and Pocket Drone could do; talking about immersive experiences.

But just like 3D printing technology it is only a matter of time before we see criminals using this technology to their benefit. It is easy to see that for example drug dealers could greatly benefit from the Pocket Drone; no dangerous transactions and the payload of the drone is 250 gram so go figure. A second one could keep track of the environment by sending a bird’s eye view to its owner.

Of course every new technology that hits the street is meant to meet some benevolent objective. But just like Nobel’s invention of dynamite, or the splitting of atoms, the use of new technologies for more harmful tasks is only a matter of time. And this is exactly where the real problem is. The consumerization process of new technologies is accelerating and so is the use of these technologies by criminals. Government’s law making processes on the other hand are slow and there are no signs of accelerating this. They may be aware of the fact that technological development is increasingly outpacing law making but they seem incapable or unwilling to address this.  That is of course until something really bad happens. The wait is on!