Earlier on METISfiles commented on the smart home concept. While we were wondering whether a smart home is such a good idea Microsoft and Google were moving forward with respectively HomeOS and Android@home, seeking to make a smart killing. Although both are developing holistic concepts for a smart automated home not much has been heard since last year. 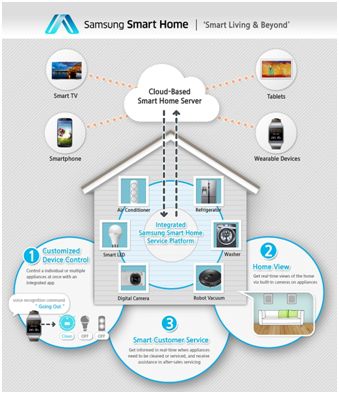 That doesn’t mean there are no developments. With the 2014 Consumer Electronic Show (CES) in Las Vegas at full steam Samsung announced its arrival on the smart home front. This is an interesting move as Samsung has a broad range of electronic household products. Whether it is washing machines, dishwashers, refrigerators, microwaves, vacuum cleaners or led lightning products, Samsung makes and sells it. They also make almost any kind of brown goods too. TV’s, DVD players, PC’s camcorders, camera’s; you name it, they make it. With their big market share in the smartphone market they have now chosen to connect the dots. To do that they have developed the Smart Home Software protocol (SHP) that enables the linking of all smart household devices and is controlled by their tablet, smartphone  smart TV or wearable devices.

With such a broad range of electronic devices one wonders why it took Samsung so long to come up with its Smart Home idea. But more importantly how smart should the dishwasher really be? Clearly the amount of smartness varies a lot per appliance. Keeping the fridge well stocked requires more smartness than handling the dishwasher. Although Samsung has a strong base with their range of brown and white good products they miss out on the central heating and lightning segments that happen to be two crucial areas of home automation that could use some more intelligence.

Not only Samsung is preparing for the home. LG is also planning to get center stage in the living room by introducing their smart TV with WebOS. Last year they surprisingly bought (parts of) HP’s dumped WebOS. Now we see why they did that. LG has loaded WebOS into its smart Ultra HD TV claiming it will bring about the most intuitive user interface as well as new user experiences that are “simpler, more native and cleaner”. A more direct competition to Samsungs smart home ambition is LG’s HomeChat service. HomeChat is a language processing technology designed to link all LG’s household appliances through text messaging. Right now it is only available for LINE-app subscribers (successfull only in Asia) but the LG management is eager to sign up other messaging services to get a stronger foothold in this big market. Whatsapp and other messaging services could be powerful partners. LG is clearly putting a stake in the ground for the smart home market.

When it comes to home automation 2013 was somewhat lackluster. 2014 however already shows more promise and products than last year in total. The question is: are we ready for it? The initial reactions are mixed. Many welcome the effort to connect all the electronic household dots but it will not be easy to persuade every individual to become a smart home user. If one thing seems to be clear, at least amongst the somewhat more savvy consumer audience, it is that after Edward Snowden’s last year’s whistle blowing people are not so sure about connecting their home to the web just because they can. The heap of hacks last year and the unhealthy interest governments take in personal information is not going down well.

There is of course the danger of lock-in to the various proprietary initiatives. However, given that Google and Microsoft are also pursuing the smart home LG and Samsung will tread cautiously not to estrange its potential client base. 2014 promises to be an exciting year for home automation!