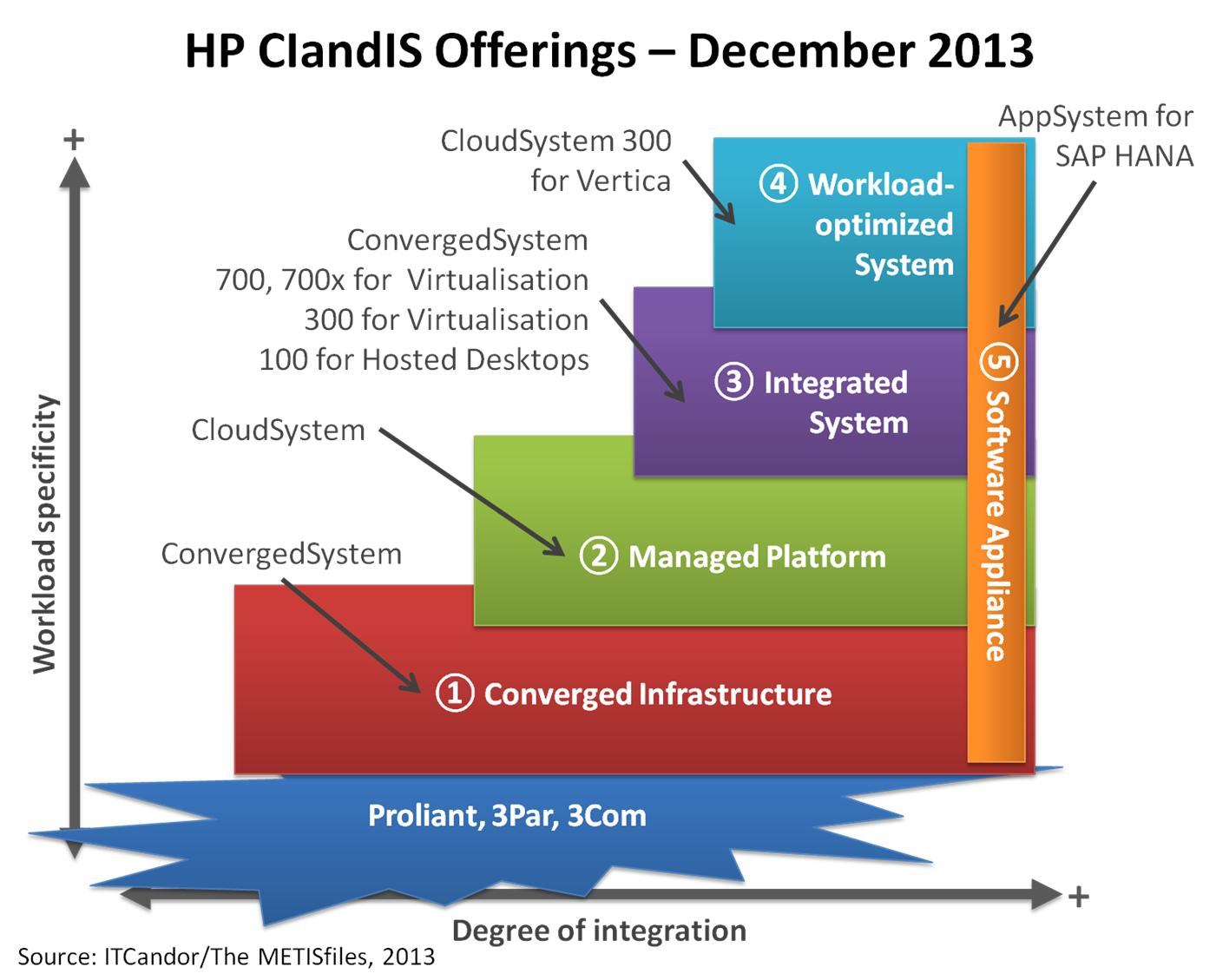 In our view HP’s approach to Converged Infrastructure and Integrated Systems (CIandIS) has been unfocused in the last few years. Despite being its original supplier, it has fallen behind as Cisco (including FlexPod and VCE), IBM, Dell… in fact almost all other server vendors, who have introduced easy-to-deploy and manage systems combining servers, storage, networking and infrastructure software. It’s not that HP lacked offerings, just that it was slow to differentiate them in terms of functionally and in its marketing.

If you agree, you’ll want to decide whether these latests announcements put it back in the race.

CIandIS will account for 4% of data centre spending on servers, storage, networking and infrastructure software in 2013 and will grow to 8% by 2018. 2014 will be a vital year as vendors shift their focus from early adopters to the ‘late majority’. There’s a lot to play for, especially as we expect large organisations to spend 8% more on ITC than they did this year. As it lags its competitors HP will need to deploy its new strategy quickly to take advantage.

HP sees shifts in style of IT from the mainframe in the 1970s and 80s to client/server in the 1990s, the Internet in the 2000s and to ‘Cloud, Social, Big Data and Mobile’ in the 2010s – a reasonable approach, although we think none of the ‘styles’ has ever gone away and that its description of the latest has a catch-all definition.

In our research we prefer to look at types of supplier integration first – vertical to horizontal to matrix, before looking at the types of computer system they create. For us HP’s ‘Internet’ creates ‘user-built’ and its ‘Cloud, …’ ‘supplier-built’ integrated systems and the latter is the child of Matrix Integration.

How Has HP Changed Internally To Address The Opportunities?

HP has merged its age-old industry standard v business critical server divisions and adding a new converged systems unit to concentrate on user experiences and integrated systems. It has now adopted the same structure in EMEA where Iain Stephen takes responsibility for all (from his long-term in industry standard) servers and Mark Payne takes on converged business (from business critical). HP has many assets for building integrated systems – its acquisition of 3Par (storage), 3Com (networking), and Vertica gives it modern components, it has a lot of experience in designing and building data centres and it has strong partnerships with VMware, Citrix and Microsoft for hypervisors – and in the case of the latter, for applications. For now it is also the world’s largest supplier of x86 servers, although Dell has been getting closer in recent years.

ConvergedSystem is an update of HP’s existing strategy, which supported CloudSystem, AppSystem and VirtualSystem products. It has made many enhancements and introductions today, including:

The Specific systems announced or enhanced today include ConvergedSystem:

Although it offers ‘Autonomy as a Service’ in its public Cloud, we note that it has not added Autonomy to ConvergedSystem at launch, nor does it make any references to the Itanium chip. It will no doubt also address Microsoft Parallel Data Warehouse (PDW) and Hadoop in future.

While the ConvergedSystem name has replaced the older Virtual system one, HP is continuing with its other 2 brands to which it has also made some minor adjustments to its existing range. In particular:

Over all it makes sense to fill out the range, while the simplification of the ordering process and addition of OneView should allow HP to move upwards towards the higher levels of the CIandIS stack (see Figure above). The significant reduction of component choices represents a significant shift away from its horizontal roots, although it will be harder than before for its third party resellers to maintain the same levels of upgrade and service activities.

HP dependence on the widest number of channel partners could be its Achilles’ heel as it rolls out these new systems: so far NetApp/Cisco’s FlexPod is the only CiandIS offering strongly supported by the channel. It’s going to be a tough job balancing the customer’s need for simplification with the channel’s need for revenues from upgrades and on-going servicing. It’s also harder to support sales of these systems through third parties: we’ve spoken to one HP customer this year who was none too pleased with being serviced by a VAR, having been sold to by HP.

HP has been so sluggish in shifting from its dependence on horizontal integration. While all suppliers missed out on the big shifts in system design driven by the large public Cloud providers, we believe it is currently missing much of the rapidly growing market for CIandIS addressed coherently by its competitors.

For the user having CiandIS systems based on ‘converged’ server, storage and networking components originating from a single hardware vendor is a ‘nice to have’, but not as important as the ease of management, speed of application deployment and having ‘one throat to choke’ when things go wrong.

HP’s challenge is to move up through the CiandIS layers to offer workload-optimised systems. Its new organisational structure, sales and ordering process changes and products will help, but it will need to be very agile to address the major opportunities arriving in 2014.

You have zero privacy anyway - Get over it
Are You Looking For Growth in 2012?
Don't Be Evil