Living in the age of Big Data, everything seems possible. With all the data we have and generate at our fingertips, we should almost be able to create our own destiny. But as we use more and more data presenting results in a meaningful way is not always easy. Moreover it is a big challenge to present results from hundreds of variables in a way that is understandable for the human brain and at the same time meaningful, correct and complete. It is one of the reasons that business intelligence dashboards or enterprise dashboards are very popular with management. A dashboard is a visualization tool that shows the current status of an organization’s predefined key performance indicators (KPI) in a limited number of screens. It is in fact a one page real time updated management report and an ideal instrument for management  to improve  its operational efficiency by turning the relevant knobs. It is also sometimes used to show press, share- and stakeholders where a company is in terms of performance; a picture tells a thousand words. 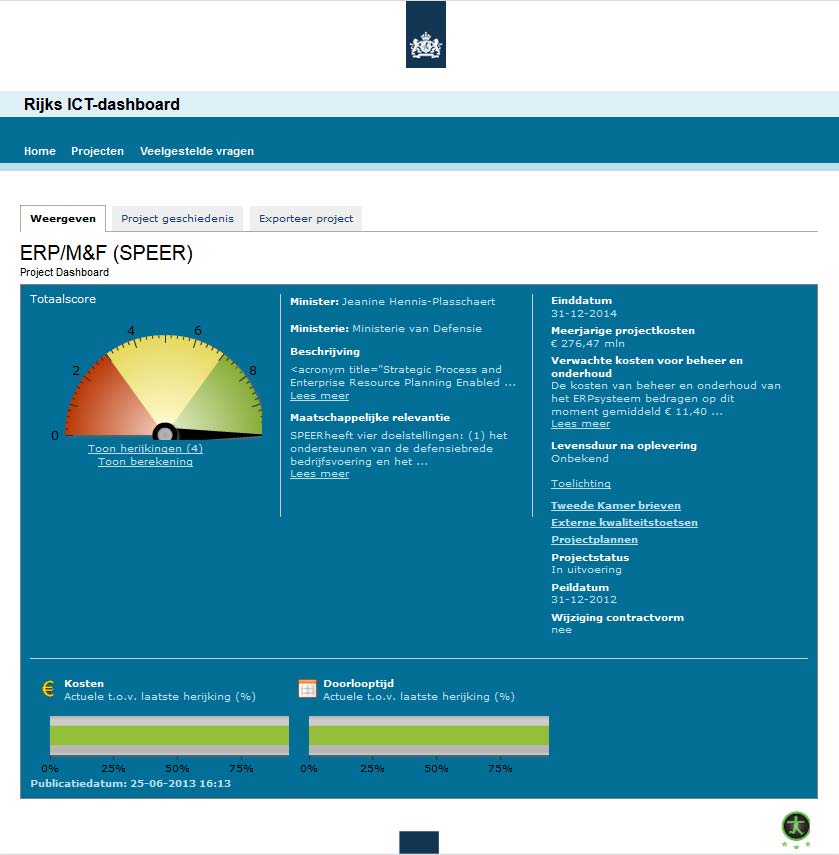 It is what the Dutch government must have had in mind when they were increasingly faced with ICT project disasters (i.e. GPS, SPEER, C2000, INDiGO, EPD, PSO, TAX-i, P-Direkt) and public outcry over wasted taxpayers’ money. Bad press and public pressure to do something about it sparked the development of a government ICT project dashboard (Rijks ICT-dashboard) in 2011. It was not intended to directly prevent ICT disasters but rather as a way to create more transparency towards how and where the taxpayer’s money was spent. In the dashboard the current status of ICT projects can be checked. It shows project description, purpose, budget and scheduling, reasons as to why it is over/under budget, early or late plus the current status of the project (delivered, abandoned, in progress, not started yet). Colors in the accelerometer graph indicate whether a project needs attention (yellow) action (red) or can be considered as normal (green). The initiative should be praised as an attempt to provide transparency into government IT projects. In fact the tool works pretty well albeit it a bit slow. It shows some interesting details:

The dashboard shows that the government thinks they are doing pretty good when it comes to delivering ICT projects on time and within budget. That is one way to look at it.

SPEER (Strategic Process and Enterprise Resource Planning Enabled Re-engeneering) is a project from the Ministry of Defense that aims to improve financial and logistical processes. The first plans date back to 2000. The project was initiated in 2002 and estimated to be completed in 7 years. The latest estimated time of delivery is now 2014. The initial budget was €185 million while the latest budget shows €276 million. It shows 5 year overtime and €90 million over budget and counting.

GPS (Geïntegreerd Proces Systeem) is a project from the Ministry of Justice and aims to replace the state prosecution paper file system. The project was started in 2001 with an initial budget of €50 million and an estimated time of delivery of 4 years. Due date was 2004. It finally cost €133 million and was delivered officially February 2nd 2011. After delivery of the project it was silently dropped at the end of 2011. It apparently failed as it was hardly used by the people who it was intended for.

Both projects are indicated on the dashboard as normal projects (everything in the green) while budget and timeliness were nowhere near to what was initially planned for. The government trick is to do a project rescoping when a project threatens to push across the boundaries of time and budget; this eventually leads to more budget and more time and a normal ‘green’ situation. The reality is way different in the case of SPEER and GPS.

It is great example of how an attractive presentation tool leads to confusion and misleading results. Dashboards are strong visualization tools but even simple ones, showing only two KPI’s (budget and time) can apparently hide more than they show. In the case of the government ICT dashboard it looks like a well meant but missed opportunity; unless it was intentional of course.

For companies, dashboards are of significant help for pinpointing aspects of the organization that need attention, action, monitoring or anything else. They can however not afford to have dashboards misrepresenting reality as they would soon be out of business. As management increasingly relies on correct, complete and up-to-date data, dashboards are becoming even more important. With the integration of scorecard methods that show progress over time towards specific business goals these real-time dashboards could become standard equipment for enterprise management. Key to a successful dashboard is therefore to have it serve a true business goal (strategic and/or operational) translated into meaningful KPI’s that are generated by reliable, correct, timely and complete data and handled by sound analysis. Leaving out any one of the above will most surely lead to failed dashboard applications and could harm the business.