While Sapphire is at full swing in Orlando and SAP HANA Cloud Platform for the enterprise suite is gaining a lot of attention, we would actually like to reflect on recent announcements around SAP products for the SME market. After all, 90% of SAP’s customers are in the SME market, though revenue wise they represent a lot less.

SAP has several options for the SME user, as visualized in the graph below (source: SAP). 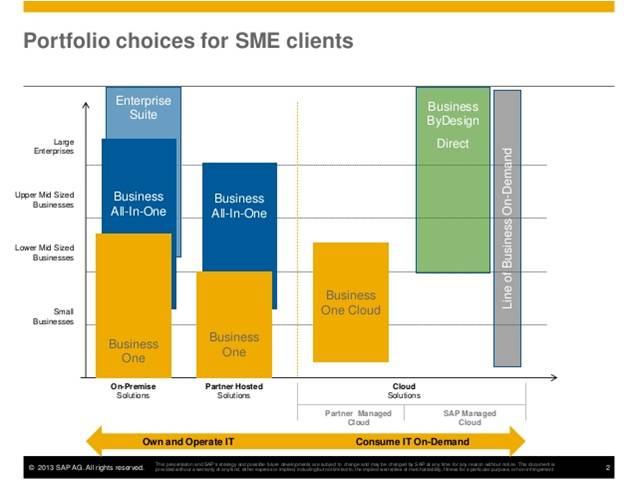 Business One is SAP’s SME flagship product. Since the acquisition of TopManage Financial Systems in 2002 the product gradually morphed into a true SAP offering. Since 2002 the company has been able to sign up 1200 customers in the Netherlands, 1500 in the Benelux. This equals to a 100 per year. As of this month version 9.0 is shipping (running on Microsoft SQL), and a version running on SAP’s in-memory platform is in restricted shipment.

Casper Joustra, managing director of SAP in the Netherlands, stated at a recent Dutch SAP user event that they are planning to really focus on the SME market now.

To expand its presence in the SME market in the Netherlands, SAP plans to:

These initiatives, however will not get the ball rolling for SAP Business One. SAP has been through a steep learning curve with Business One. Initially it tried to sell the product through its R/3 consultants engaging with local SME partners. But setting quarterly revenue targets, and creating complex support packages didn’t go down well with their partners. Over the years SAP has learned to speak the channel language, and Business One partners we speak with in general applaud the product and its potential.

Unfortunately, now that SAP finally speaks the channel language, the customer has changed the language too. They speak Cloud. They no longer want upfront software investments. What they want is an agile, fast to deploy, easy to access and easy to share IT environment. A recent Microsoft study shows that cloud adoption in the SME market will double and for some segment potentially triple in the next three years. And the preferred method to buy solutions (apart from a click on the website) is from hosted solution providers, or ISVs themselves.

SAP channel partners do not (yet) speak Cloud. And though SAP is committed  on transitioning its licence model to the cloud, there are still some hurdles to be taken. As the graph shows, Business One can be purchased in an on-demand environment. However as soon as the customer base grows, it starts competing with Business by Design solutions and Line of Business on-Demand (now dubbed Cloud Solution,  so SAP Customer on-Demand will now be SAP Cloud for Customer). This is still a SAP only game, with a SAP managed cloud and a SAP managed data centre.

If SAP is serious about Business one, they need to start talking cloud to their channel partners. The advantage they have is that there is still a lot of room for improvement in this area. If SAP is serious about recruiting among competitors (Exact, Unit4 and Afas) they have a fair chance, as neither of these vendors excels in a partner cloud strategy. But competition also comes from cloud born application vendors such as Salesforce, or locally NewBase, Jazzoo or other vendors (for a complete overview check our CloudScape).

SAP is well on its way to  transition to subscription based licence strategy. The strategy is to innovate while growing the core. Over the past year, the company has had 35% of its revenue coming from products that weren’t around two years ago.  SAP expects that in 2013 SAP’s software and cloud subscription revenue will increase in the range of 14% – 20%. Investments in integrating cloud offerings from its acquisitions (Ariba and Succesfactors) as well as continued investments in SAP Hana Cloud Platform will only make the cloud offering stronger. The challenge is in getting that message to the partners.

Bring Your Own Deception
The Battle for the Developer: Salesforce
2015 Will Be A Very Interesting Year for Hybrid InterClouds