In the past, data centre computing was characterised by large, integrated resources called mainframes. As shared computing resources became more decentralized and affordable, these resources split into distributed computing layers of servers, storage, networks and software. To curb the proliferation of distributed IT sprawl, these computing layers were pooled and virtualized for maximum efficiency and minimum costs. Today, to be able to rapidly deploy new pooled resources, the computing layers are delivered in a single chassis either from a single vendor or as reference architectures. This is what is now commonly known as converged infrastructure.

The figure below outlines the four types of system architectures introduced above and their key architectural differences and selling points. 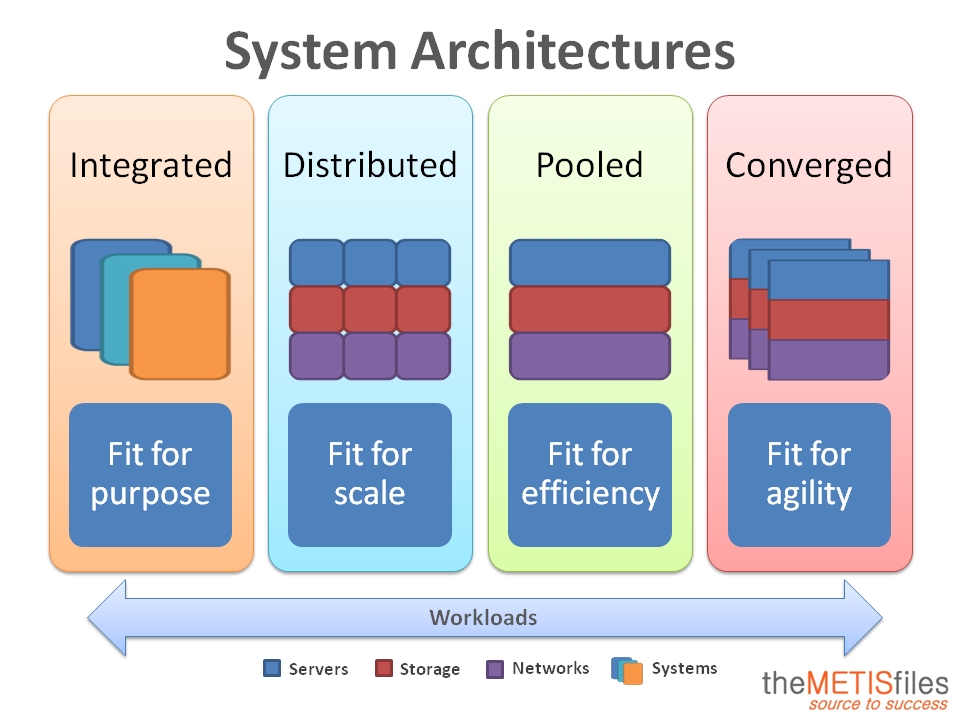 Integrated – Orchestration, computing, storage and networking are tightly integrated in a single box. System upgrade and growth is through replacement of the entire system. The architecture is designed for a specific purpose or workload.

Distributed – Computing and storage are in separate system blocks orchestrated separately and connected through networks. System upgrade is through replacing component blocks. System growth is through adding blocks. The architecture is designed to enable growth and scale out of multiple workloads.

Pooled – Computing, storage and networks are in separate resource pools consisting of blocks and orchestrated separately. System upgrade is through replacing blocks within a pool. System growth through adding blocks to a pool. The architecture is designed to enable efficient scaling and growth of multiple workloads.

Converged – Computing, storage and networks are in separate resource pools jointly orchestrated and in a single chassis. System upgrade is through swapping components within the chassis. System growth is through adding components to empty chassis slots. The architecture is designed to support rapid deployment of multiple workloads. Within converged infrastructures the pendulum swings back to the integrated system architecture with vendors also offering fit for purpose versions for specific workloads. Case in point is IBM PureSystems that offers PureFlex as the generic flavour and PureApplication for cloud and pattern workloads and PureData for big data analytics.

Who is selling converged infrastructure?

Converged infrastructure gear can be bought pre-integrated as a single SKU and single stack or more flexible as a reference architecture that can be built by system integrators or as a DIY effort.

Who is buying converged infrastructure?

All four types of system architectures discussed above are currently used within enterprise and service providers with converged infrastructure just emerging. Integrated systems are typically used more in transactional environments (workloads that are easy to programme and hard to scale). Distributed and pooled systems are used more in web environments (workloads that are easy to scale but difficult to programme). Converged infrastructure promises a best of both worlds approach promising decreasing time-to-deployment of both environments. However, enterprises that are looking to buy converged infrastructure need to deal with aligning the politics of distinct user and admin constituents (software, server, storage, networking, etc.), each typically with its own staff and budget.

With the desire to rapidly deploy (and disband) compute resources, enterprises and SaaS vendors increasingly buy infrastructure as-a-service (IaaS) rather than build infrastructure themselves. The vendors that sell IaaS services (also called managed service providers or MSPs) are also buyers of servers, storage, networking and orchestration products. In order to be able to support the large variety of workloads that SaaS vendors and enterprises want to consume in a managed hosting or IaaS environment, MSPs are increasingly looking at converged infrastructure. Conversely, converged infrastructure vendors can and will also deploy their own systems to deliver IaaS themselves. For instance, IBM with its Smart Cloud Service Delivery Platform.

The Future Of Converged Infrastructure And Integrated Systems

ITCandor and The METISfiles have announced a joint multi-client study on the future of converged infrastructure and integrated systems. We will define, size and look at the success factors for converged infrastructure vendors, differentiating these from earlier styles of systems. Our findings will be based on a detailed analysis of the main system contenders, including, but not limited to the ones mentioned above.

We propose a combination of expert interviews with both vendors and users, augmented with desk research and expert analysis. This will deliver three reports, containing vendor competitive analysis, user wants and needs, and market share, size and forecast respectively.