We recently wrote about how to expand your cloud business and introduced our XaaS Expansion model. This expansion model applies not only to Software-as-a-service (SaaS) vendors but also to Platform-as-a-service (PaaS) and Infrastructure-as-a-service (IaaS) vendors. But SaaS, PaaS and IaaS vendors need different attributes to be able to compete effectively in their respective segments (see Figure below). 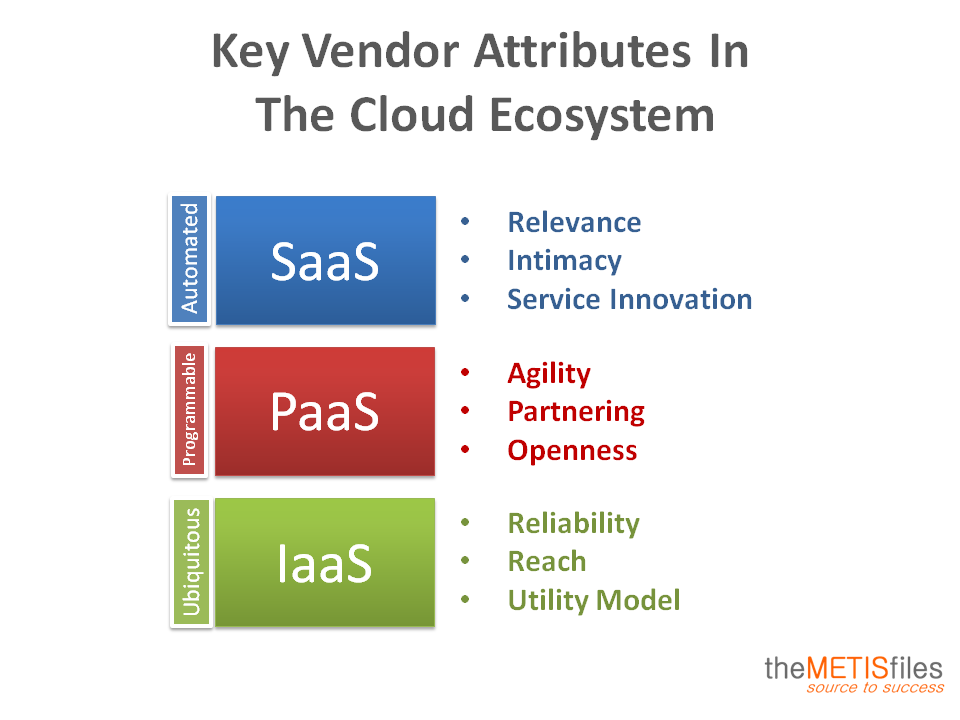 The cloud ecosystem can be broken down into three layers: infrastructure, platform, and software.

The ubiquitous infrastructure layer is providing store, compute, backup, synchronisation and other infrastructure services to PaaS and SaaS vendors and to enterprises. The archetypical vendor example would be Amazon with its elastic cloud offering, but there are many others (have a look at our Dutch Public Cloudscape for some Dutch examples). IaaS vendors primarily compete on reliability and reach, just like the utilities industry.

The programmable platform layer is providing specific and generic application based development services to SaaS vendors and to enterprises. The archetypical vendor would be Microsoft with its Azure offering but there are many others (have a look at our Dutch Public Cloudscape for some Dutch examples). PaaS vendors compete primarily on agility, openness and the ability to partner with IaaS and SaaS vendors.

The automated software layer is providing application software services to enterprises. The archetypical vendor example would be Salesforce with its sales cloud offering, but there are many others (have a look at our Dutch Public Cloudscape for some Dutch examples). SaaS vendors compete primarily on relevance, customer intimacy and their ability to disrupt the traditional on-premise software delivery model.

Only very large vendors will be able to simultaneously maintain thriving IaaS, PaaS, and SaaS plays. Most smaller cloud vendors will concentrate on being the best in one of the three layers and partner with other cloud vendors outside their respective layers. Large SaaS players like Salesforce will have their own PaaS offering for specific software development on their own platform. Large independent PaaS vendors will align themselves with a large software player like Microsoft or focus on a specific segment like mobility or ISV SaaS enablement. Large IaaS vendors like Amazon will have their own PaaS offering for generic software development or enhanced programmability of their IaaS infrastructure.

Are you selling IaaS, PaaS, or SaaS services? What are your key competences? Let us know!

Betting on the Blockchain
Collaboration In The New Ecosystem
Amazon Cloud: The Results Are In

One Response to “Competing In The Cloud Ecosystem”