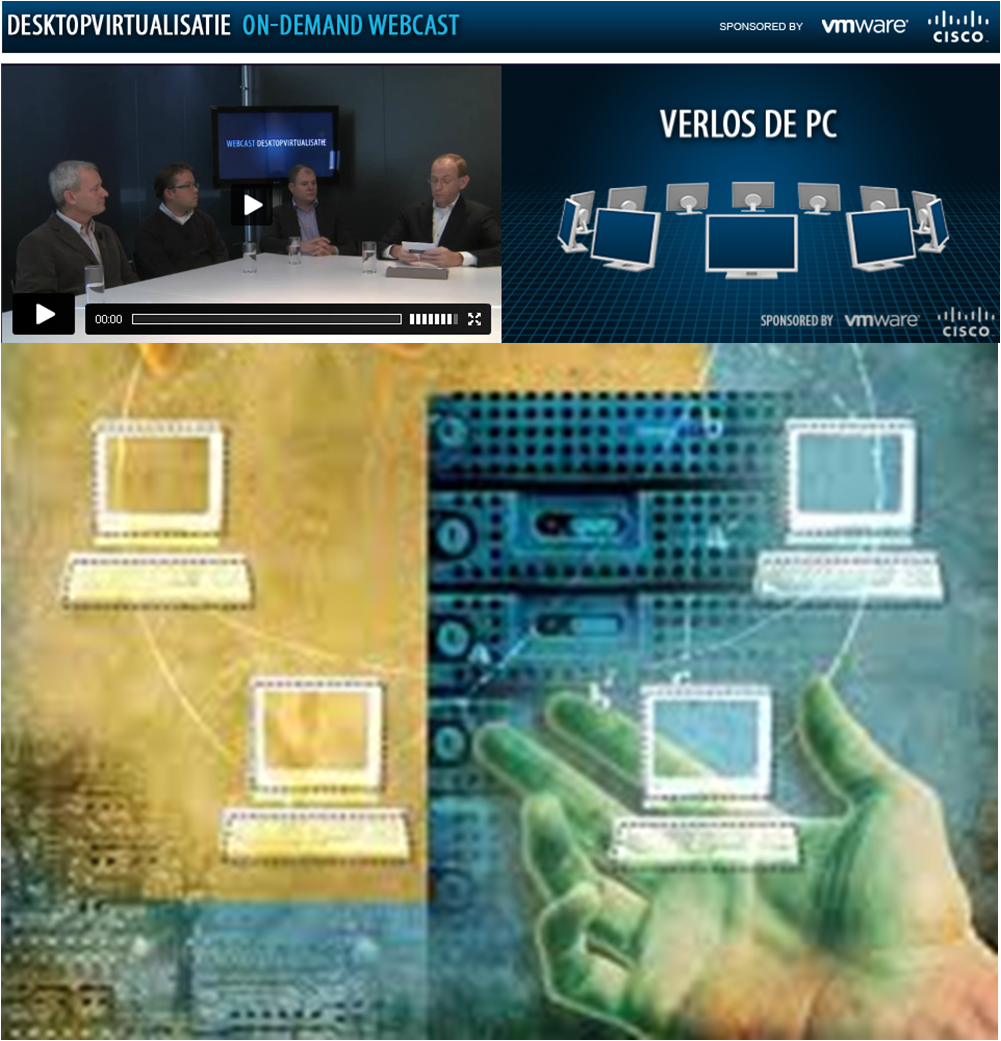 Last week The METISfiles analyst Marcel Warmerdam was invited to join IDG’s webcast on desktop virtualization led by Tom Sanders. Other participants  were  William van Collenburg from VMware and Erik Lenten from Cisco. Here’s our take on it.

Desktop Virtualization (DV) has been around for a while but, in all honesty, so far it has been a technical solution for the IT department to help manage the corporate PC installed base in a more efficient way. And it did work for large and very large businesses that had many standardized desktops to take care of. As of late DV has also triggered the interested of companies witnessing employees bringing their own devices to work and who are now subsequently more vulnerable to security breaches than before. Time to give desktop virtualization a second glance. The webcast focused on three topics surrounding desktop virtualization: who should be interested in DV, what are the pro’s and con’s for businesses evaluating DV and what is the future of DV.

The METISfiles has clear stance when it comes to DV. While 5 years ago DV was a ‘nice to have’ for the IT department this has changed significantly. From an IT-tool aimed at provisioning and managing the desktop base of large corporation, DV has become a tool that plays a crucial part in securing the corporate IT environment on the one hand and facilitating and supporting the Bring Your Own Device (BYOD) movement on the other hand.

At the same time The METISfiles concludes that market leaders in virtualization technologies, notably  VMware, Citrix and Microsoft are being challenged at their own game by new players. Contenders such as N-Computing, Framehawk, Red Band Software, Cellrox, Good Technology, Excitor and Enterproid, are releasing alternative desktop virtualization software with the new Personal Information Devices in mind. And for good reasons too: smartphones and tablets are flooding the enterprise and form a new potential security breach for the IT department. We welcome these new players who keep current players. While the first stage in DV was aimed at moving from a device centric architecture to a user oriented architecture the next phase in DV will help to transition towards a persona based architecture that fits better with the various roles individuals take on during their daily life.

In any case, while in the past extensive business cases had to be made to show that DV was worth it, we are convinced that the current trends in personal computing and the maturing of virtualization technologies will make DV a much more easy to sell solution now that we have found a worthy problem.

How Smart Should The Smart Home Really Be?

Slate 8 Is Late … And Just In Time

The Future Of Communications Is Inside The App

The Future Of The Desktop Is Out Of The Box