Last week we attended the NetEvents EMEA Press and Analyst Summit. Part of the 2-day program was a debate session on Software Defined Networks (SDN) with panellists from Gartner, IDC, IBM, Dell, HP, Extreme Networks, Enterasys and yours truly. The debate centred on the question who is first to ride the SDN revolution, the Enterprise, the Cloud Data Centre, or the Service Provider (and where is it taking them)?

SDN is about separating the network router and switch data plane (hardware that does packet forwarding) from the control plane (logic that controls packet forwarding). In SDN the control path decisions are taken out of the switch and managed by software on a centralised server. In other words, SDN is about providing a programmable interface into the infrastructure to modify the network infrastructure behaviour and delegate the capability of modifying that to other IT systems. The OpenFlow protocol, which the Open Networking Foundation (ONF) is standardizing, is part of SDN and is used to communicate between an external OpenFlow controller and OpenFlow enabled switches (see Figure below). 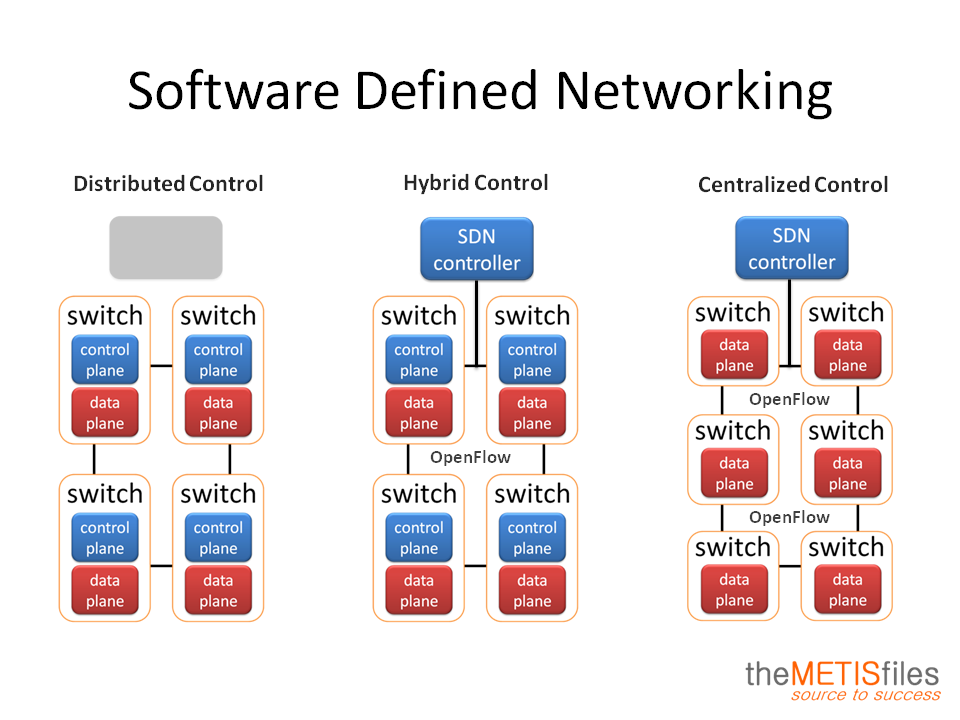 Why is SDN important?

The disruptive aspect of SDN is that it potentially opens up today’s vertically integrated distributed control networking gear and allows standard switch hardware to be controlled centrally via OpenFlow through an SDN controller. Of course, the other side of the coin is that vendors can and will develop their own proprietary versions of SDN and OpenFlow, delivering hybrid and centralized control in a vertically integrated fashion. Already Cisco, HP, IBM and Dell are selling so-called converged infrastructure solutions that package servers, storage, networks, and orchestration software in a single rack.

The SDN and OpenFlow development also ties into OpenStack, an open source cloud operating system with the mission to enable any organization to create and offer cloud computing services running on standard hardware. Open source cloud management platforms (CMP) like OpenStack can automatically provision network resources through linking into an SDN controller that is controlling OpenFlow enabled switches. CMPs like VMware vCloud are looking to do the same. VMware recently acquired Nicira, a network virtualisation software vendor as part of their move to create the software defined datacenter. A fully automated datacenter, where all infrastructure is virtualized and delivered as a service. Network virtualisation is not new – virtual LANs have been around for ages – but creating virtual networks is currently time consuming, involves command line interfacing rather than mouse point and click, and is tough to implement across vendors and geographies.

Automated datacenters are an important prerequisite for our happy cloud scenario. With 47% of the $299B datacenter market pie attributable to internal staff – source ITCandor – the potential cost savings of automation are also significant.

Who is selling SDN?

Three types of vendors are currently looking to get a share of the SDN market, currently estimated by Doyle Research to be worth $1.7B by 2017. The existing networking vendors like Cisco, Juniper, HP, Huawei and others are taking the hybrid control approach. They enable their network to be more programmable and open up their systems with APIs but at the same time they keep the control intelligence inside the switch. They also hedge their bets through investing into start-ups, like Cisco with Insieme. Those that take on the Cisco market dominance, like HP, are embracing SDN more rapidly as another tool to fight the 800lb gorilla. Software vendors, like VMware, Microsoft, Citrix, Parallels and others are building SDN controllers that are part of their cloud management platforms and are designed to take control of OpenFlow enabled networking gear. Last but not least, start-ups like Big Switch, Nicira, Vello Systems and Adara Networks take a greenfield approach.

Who is using SDN?

The current sweet spot for SDN is large scale web datacenters. Think Google, Facebook, Amazon, Microsoft et al. In fact, these companies are building their own networking gear because they can’t get what they want from the networking vendors.

Other datacenter users, including universities, research institutions and financial institutions are starting to use commercial vendor SDN gear in test setups, looking to increase network agility, rather than lowering CAPEX and OPEX.

The average enterprise is not using SDN today. Potentially, however, SDN can lower the cost of networking gear, lower operational costs and increase network agility.

Currently, web-scale datacenter installations are reaping the benefits of SDN, and they are building their own SDN gear. Research institutions and service providers are testing commercial SDN in their research networks and in the WAN. In the short term SDN is all about agility and not about lowering CAPEX and OPEX. In the long term, SDN will be an important building block for the emerging InterCloud.

Large-scale and web datacenter users, universities, telecom service providers and financial institutions with capable internal networking staff should look at SDN now and decide how SDN will improve their network agility and programmability.

The average enterprise IT shop with limited networking staff should not take the plunge yet but follow SDN developments closely and query their vendors about their SDN vision and roadmap rather than expect significant CAPEX, OPEX savings today.

One Response to “The Future Of The Network Is Software Defined”