Ever thought about connecting all electronic devices in your home and controlling them with the touch of your fingertips or voice command? Chances are you did but dropped the idea as it seems too complicated or just too expensive; not worth the trouble. 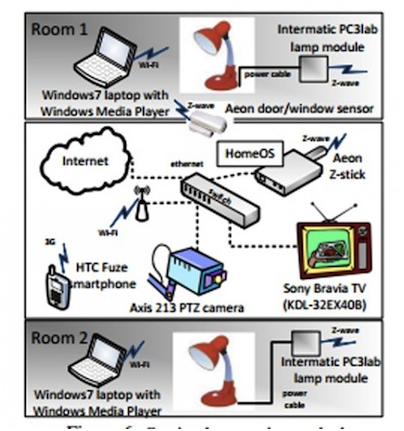 The IT revolution has certainly not bypassed our homes. A lot of our home devices and appliances have evolved from manual contraptions to electrical powered machines to smart electronic web-enabled devices. Since most electronic devices come with Internet connectivity a Jetsons like residence seems possible in the near future. And as electricity bills start to mount, fed by more electronic equipment and rising energy prices one would expect the home-automation industry would work on making your home smarter and more efficient. Optimizing your energy usage, facilitating easy information access throughout your house, creating an optimal home climate, securing your home perimeter, scheduled window blinds, lights coming up automatically when entering a dark room, etc.

But while individual home devices have become smarter over time the true benefit still falls short since they are not really connected. The sum of all these smart devices have not resulted in a smarter living environment. Most devices act as point solutions in the home without much knowledge about the rest of the home environment. But  being aware of all other electronic systems, devices and appliances  is important because a house and its residents form an ecosystem of time and location based functionalities and interdependencies. The problem is in bringing an ever larger variety of devices with different ways of networking (wired, WiFi, 3G, Z-wave, X-10) and protocols from different vendors, together under one interface and control.

A few weeks ago Microsoft released a progress update on their project HomeOS that wants to address the smart home . HomeOS aims to be the smart home operating system that easily connects, integrates, manages and controls all kinds of electronic devices inside the home. A smart device-agnostic environment that integrates and orchestrates devices and appliances will certainly deliver on convenience, efficiency and control in our home. The main issue here might not be creating the technology platform and infrastructure. The barrier to adoption will most certainly be people. The real question is: are we ready for it?

While smarter use of smarter devices seems like a smart idea, the majority of people will not be able or willing to cope with the infrastructure behind it or pay for unclear benefits. For this reason the networked home so far has not taken off: you are either a geek spending too much time to install, integrate and manage your own network, or you outsource the work to a specialized company paying too much for a vertical closed solution or a custom made monolithic system. Most people are not technology geeks and while there are a lot of vendors selling home automation products they do come with a steep price tag.

Nevertheless more and more sophisticated actuators and sensors find their way into information devices and home appliances adding functionality and control. Connecting all these devices sensors, actuators and appliances is usually referred to as the Internet of Things (IoT). Home automation is just another environment where we will see the IoT materialize. Not coincidentally it has now attracted the interest of Microsoft , Google and Apple. For them home automation could be the next frontier where the consumer eco-system battle will expand.

Microsoft is most actively engaged in investigating if a home operating system is worth a shot. From their perspective it makes a lot of sense. Microsoft missed a few boats and arrived late in the smartphone and tablet arena but still holds a strong position in the home where most PCs  are running Windows and where the xBox is one of the dominant gaming consoles. Coming up with a home OS will help them build a strategic consumer stronghold and a possible long term consumer opportunity. Do not be surprised if HomeOS and Windows 8 will work very well together.

In 2011 Google announced Android@Home (Project Tungsten) that aimed to connect and control almost any electronic device through the Android@Home platform by offering an open protocol so that other devices could be connected as well. After smartphones, tablets and TV the Android OS might as well run the home infrastructure or, as  Android founder Andy Rubin put it during Google’s I/O 2011 event: Everything should be Androidified. But after the announcement in 2011 it has become very quiet.

Apple has always been focused on consumers. But their focus is clearly on information and media devices. Exchanging information, be it text, music, movies or other data is facilitated by their iCloud where it keeps a tight ship on whatever goes on in there. Their ongoing commitment to iOS does give them a powerful tool to extend their footprint to other places and functions in the home. Apple has its aficionado base in the consumer market. This makes an entry into the home automation market very relatively easy. But as far as the rest of home automation is concerned Apple has not issued any thoughts on this topic and sticks to connecting media devices.

There are numerous other companies that have and are experimenting with home automation. Philips launched its Ambiant Intelligence program back in 1999. Their aim was to create a digital environment in which “the electronics are sensitive to people’s needs, personalized to their requirements, anticipatory of their behavior and responsive to their presence.” Their HomeLab research did result in successful home automation products.

Telco’s and energy providers may be interested too as they have an entry into the home. From their respective core business, delivering connectivity and energy, value added services inside the home such as in home connectivity or a smart home energy grid could be developed . Privacy concerns and DIY solutions form a barrier as well as their not so customer centric business model that comes natural to the utility sector.

The Internet of Home Things is shaping up quickly. The opportunities are boundless and connecting the dots seems only natural. But creating a context aware smart home automation system requires human behavior at the core of the system and will have to cope with the swinging moods of people; a most painful challenge for developers. Some fundamental requirements for a more holistic smart home environment need to be taken care of as well. Here are a few we regard as necessary:

The above covers just the basics. But even these fundamentals will not guarantee that home automation will finally fly. The question is not whether the technology is ready but if we, people, are ready for a smart home environment.

While in a business environment business rules and processes are defined by leading business principles this is not the case for the home and its residents; home principles go only that far. Yes, the Roomba will become aware that somebody enters the room and gets out of the way. Lights will go out if nobody is in, or will be left on on purpose to fake that somebody is in the house. And the heating system will only start when people are almost home. Orchestration of all the home functions will be a difficult but doable job… up to a point.

At the METISfiles we agree that home automation through a smart central infrastructure is a much more attractive scenario than more remote controls. The system will do exactly as it is programmed. But how smart can a smart home be? Can it read our moods and act accordingly. People are not digital beings and may therefore sometimes feel like switching off the system just because at a certain point we think the system is ruling our lives rather than the home. But then again, can home automation really be working without ruling a bit of our life?

Microsoft and others have set out on an ambitious task to make homes smarter, more efficient and life easier on us. Their capabilities should not be underestimated but somehow it seems that home automation and people are not completely compatible and destined for a happy marriage. As far as home automation is concerned we are still very much in unchartered territories but with the increasing interest of IT giants home automation may well receive an extra boost to create that context aware, highly personalized home automation system. Let us know what you think of home automation.

COBOL naar de hemel
The Future of Work: Rise Of The Machines Part 2
Expanding The Public Cloud Opportunity: How To Grow Your XaaS Portfolio