There is a two trillion dollar fixed and mobile communications market out there that is about to find out that both communications and connectivity could quickly become feature and function rather than product and service.

Already communications is rapidly being unbundled from the underlying network. Skype, WebEx, and Lync are just a couple of examples of an over-the-top (OTT) communications product that is primarily offered without connectivity. These OTT products are rapidly replacing bundled operator services. As a result operators like KPN see revenues shrink and margins dwindle. 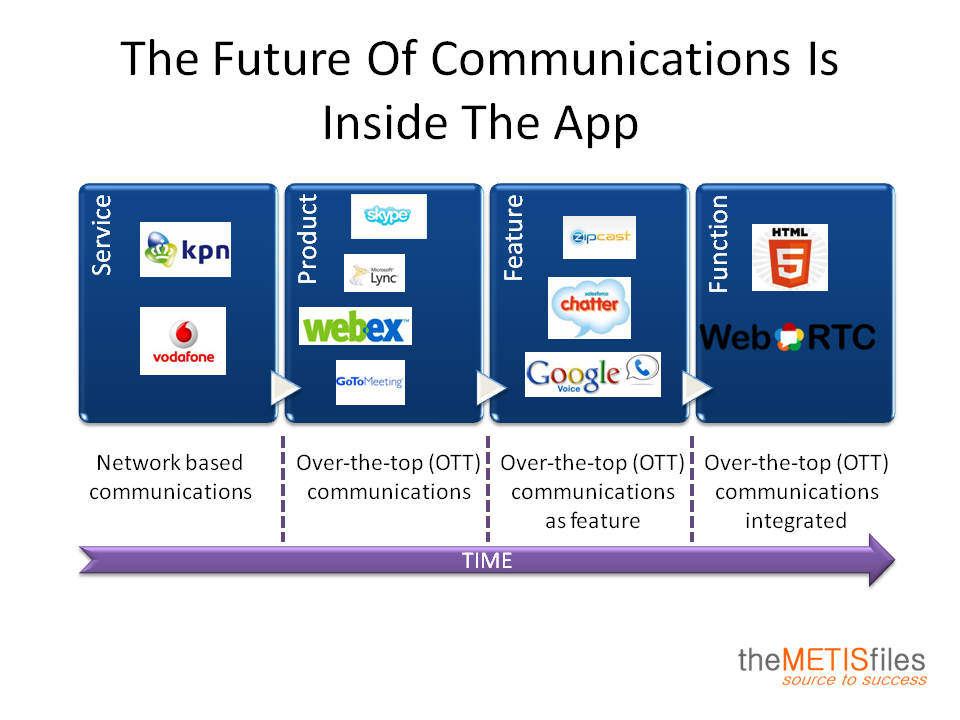 Not only is communications becoming an app feature, it is now also becoming a function of the web. Technologies such as HTML5 and open source initiatives such as WebRTC are enabling web browsers with integrated (real-time) communications functions. A couple of months ago Google added support for WebRTC technology in the developer version of Chrome, allowing real-time video chatting without the need for drivers or a stand-alone client. Polycom, Vonage, Vehix.com, Firespotter, Siemens, Nimbuzz and PCCW are currently actively developing browser-based solutions using WebRTC, according to Google.

And there is more. Connectivity is becoming a feature and function of hardware. Amazon created its own device (Amazon Kindle) and added connectivity as a feature. If you buy a Kindle with 3G you do not need to buy a mobile data subscription. Global 3G is included and the operator is hidden from the user. And now device vendors like Dell (Dell NetReady) and HP (HP DataPass) are adding 3G connectivity as a feature to their netbook lines. Again, (global) 3G is included and hidden from the user. The mobile Internet is increasingly available as a preloaded (global) device feature.

But it is not just devices that bundle access. Japanese vending machines are now offering free Wi-Fi. Asahi Soft Drinks includes 30 minutes access to the Freemobile network for those in the immediate vicinity. Of course, the company expects you to get very thirsty in the process.

Just like the features and functionality of the desktop are liberated from the boxed form factor, communications and connectivity is being liberated from the network. The (mobile) telco challenge is to profitably ride out the current business model whilst at the same time positioning for the new world. Operators can try to resist this trend at their peril. The more innovative ones are already partnering with or acquiring OTT vendors or busy creating their own offering.

Are you thinking out of the box and beyond the network? Let us know!

Dell Is Feeling Bullish About The Enterprise
Remote Access Is The New Normal
Personal Cloud: Beyond Control and Convenience
Share and Enjoy: