In 3001 Frank Poole was brought back alive after floating in space for about a 1000 years after HAL got a mind of its own. Being revived, Frank was at first not really connected to his new environment, hardly able to communicate; things had definitely changed. Then he got his Brain Cap that directly connected his brain to all the information he needed; it translated information into sound, scents, flavours, colour, images, words, numbers and feelings straight into his brain. He was re-connected.

With the speed at which information technology develops a 1000 years seems way too long to see our current desktops replaced by a heads-up or in-brain device. As we have moved from clay tablets, to paper, from the drivel to the pen and from the keyboard to the swipe screen it is clear that some aspects of Arthur C. Clark’s 3001 The Final Odyssey will become a reality even this decade. 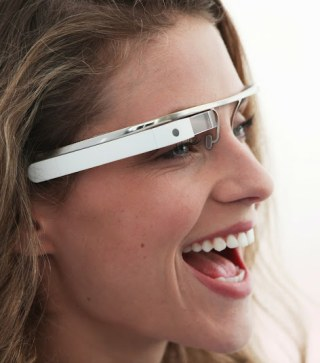 At the moment we are not just contemplating the future of the desktop but actively exploring it. Even though the term “Personal Computer” and “desktop” sound like a 20th century relic the PC will still be around in the next decade. At the same time it is clear that neither the smartphone nor the tablet will be the desktop of the future. They are evolutionary devices that have their roots in the PC and the mobile phone and are the result of ongoing IT consumerization. It shows the power of the boxed technology format and the fact that we are constantly buying more devices rather than replacing them. Over 10 million personal information devices (PID) were sold in the Netherlands in 2011; these include PCs, tablets, e-readers and mobile phones. The announcement of the death of the PC is still somewhat premature: over 3 million were sold last year, three times the tablet shipments. It will take at least two more years before the tablet will outship PCs. It also shows how the format of the boxed technology device (box – screen – hand) is deeply entrenched in our IT mindset.

Nothing wrong with technology in a box. It has helped us to consume our information wherever we are and whenever we wish: text, photo’s, images, movies, music, data, etc. To get to the current stage hardware vendors focus much of their resources on developing new form factors and increased functionality. But while we can do pretty much anything we want at anytime, we can’t always do it the way we want to; form factor and functionality are not always a perfect match. New desktop breakthroughs will have to come from the ‘anyway we want’ wish. To do that hardware developments increasingly have to move beyond the traditional box concept with its vision/touch interface. They should think about ways to create a more efficient and immersive interface by combining all 5 human senses.

It is interesting to see that Google has taken up that challenge. With their Google Glass Project they literally think outside of the box. In fact Google’s goggles actually come close to Arthur C. Clark’s Braincap. It is not a totally new concept as the augmented reality currently used in the visors of jet pilots has been around for a while. Carmaker BMW has taken concept of the heads-up display (HUD) to the windscreens of their top 6-series to projecting driving information in the form of augmented reality. It will only be a few years before smart windscreens become the standard for cars. Google now is merely taking the HUD concept one step further by projecting information in one’s glasses. With the ongoing miniaturization the concept may even reach the stage of a commercial product sooner than we think. Google is counting on the consumerization of IT. In their vision the interface of a next generation of personal information devices could be a HUD like device that is much more tightly connected to the human body and connect directly or indirectly to the internet.

Although there is no general accepted vision of the next generation of PIDs in an earlier post we discussed some features and functions of high-end smartphones and media tablets that we expect to come as a standard in the next generation of personal devices. At the same time current development in mobile, social, location awareness and connectivity also points toward a future PID that is much more geared towards the way we want our information. Most changes we expect to take place in the following areas: 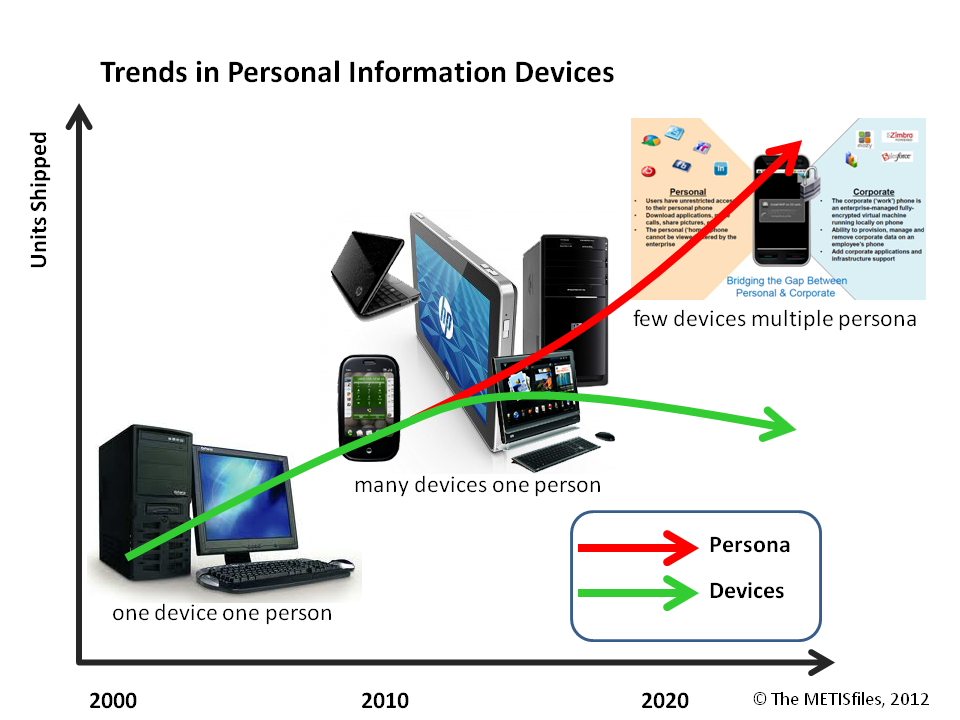 At the METISfiles we believe that future smart devices will be increasingly mobile, multi-functional, multi persona, context aware and always, smart connected. As a consequence the market for personal information devices could easily double in the next 5 years, providing people on average with at least 1 new PID per person per year. The next generation of smart devices will also start to replace the PC as the preferred general purpose device and hub of the local network. In fact the smart device will become the hub of our personal network and the de facto interface to Life, the Universe and Everything. The inevitable trend towards BYOD will however require businesses to invest in client virtualization technologies and role-based computing in order to secure their information environment.

More integrated functions and more persona could eventually bring down the ever increasing number of physical devices per person. But as the HUD-interface is in its infancy, BYOD not yet fully embraced and desktop virtualization and role-based computing still limited to a minority of enterprises we anticipate a growing number of PIDs in the next 5 years. But further down the road it seems unlikely that people would want to handle an ever increasing number of devices. The second half of this decade we expect to see multiple role based virtual desktops instances (persona) on smart devices that will effectively drop the number of physical devices.

The Braincap is not on the radar screen but the outline of the new ‘desktop’ is definitely shaping up. Let us know how you see the future of the desktop.

Data Centers and the Cloud
Big Data: Game On
Integration as a Service: The Logic behind SnapLogic
Share and Enjoy: