For decades analysts have discussed the success of the IT industry and the brilliance of IT developments; all from a technology point of view. But the IT industry’s success is fading and, fueled by M&A, it is clear that it is quickly becoming a very mature sector where it is all about share and hardly about growth.

No wonder that 2011 saw tech companies wrestle with market conditions. But at the same time 2011 also saw a few interesting ICT-related businesses going public. Linked-in, Groupon and Pandora had their IPO’s. Linkedin’s IPO went well. They ended +90% after an initial share value of $45. Groupon ended +31% at their first trading day. Pandora, an internet radio company, ended +50% at day one. The next one is probably Zynga, a social network game developer who plans to go public this month. And next year Facebook…

It is more than rumours that Facebook wants to go public in 2012. The initial share price is still a big unkown and Facebook’s estimated value therefore varies considerably: from $40 billion to over a $100 billion. A closer look at Facebook’s history reveals that Microsoft invested $240 million in 2007 in return for 1.6% of the shares. This equals the value to $15 billion in 2007. Goldman Sachs followed in 2011 by investing $500 million in Facebook and got 1% of the shares in return. Facebook’s value: $50 billion. In less than 4 years time the value of Facebook tripled. Lou Kerner from Bloomberg even suggested that Facebook’s value could be well over $200 billion by 2015. That is not too shabby for a company that started out in 2004 collecting pictures from students. With Goldman Sachs in the driving seat a successful IPO in 2012 seems guaranteed. One almost could think that these social media businesses are beyond business reality.

So what is the reality for Facebook? With over 800 million pairs of eyeballs they have a strong advertising game. Not just plain mass advertising but targeted advertising based on known Facebook user profiles that promises higher click through ratio’s and, eventually, higher conversion rates. Facebook’s ambition is to become the number one advertising platform and displace Google. But while the combination of eyeballs, page views, real time advertising and data mining will undoubtedly excite advertisers, it does not mean that all Facebook users will be as pleased. Loyalty is short lived these days.

That, and the average smartphone screen size  of about 4”, puts a potential cap to advertising opportunities. But Facebook has watched Apple, Amazon, B&N  and Google very closely. They all go for a superior and stickier user experience by creating an engagement model that combines content, device and personalization in order to create a larger and long term share of the consumer wallet. This is exactly what Facebook can do with their rumored FB-phone. Although they have always denied this rumor it does make sense to integrate the Facebook experience deep into the OS of a smartish phone. It would further integrate the worlds of social networking and telecommunications. It could make them the cyber gateway for the smartphone-equipped web generation, instantly making them the undisputed marketing powerhouse with the ability to go far beyond advertising.

Facebook is a great example of where the digital era is taking us. Google, Amazon and Apple are the other three kids on the block that fight for consumer control. Microsoft can still make it to the giant fab four but it could also follow IBM’s direction and focus on creating and maintaining the infrastructure of the web society and/or become primarily a B2B tech provider. 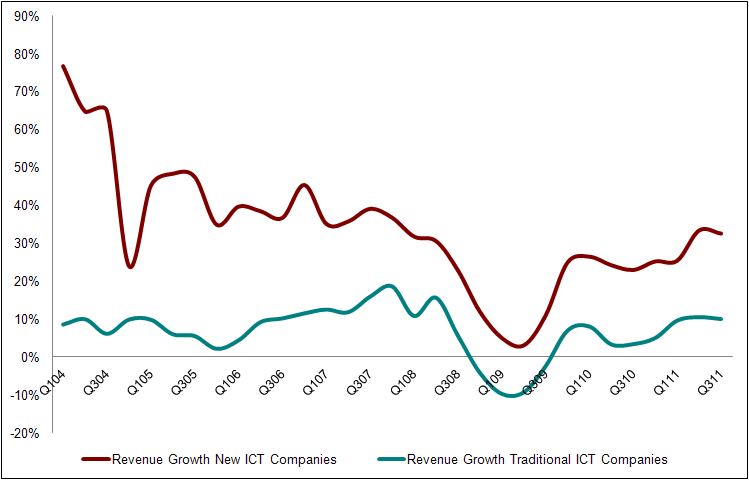 The graph shows the annual revenue growth for selected IT vendors of ITCandor’s vendor revenue tracking database, segmented by technology driven (Traditional ICT Companies) and information driven (New ICT Companies) business models. From the graph it becomes clear that, while most traditional IT spending is still with B2B IT technology spending, the real action is increasingly in the consumer domain of advertising, content (services) and consumer e-commerce; a potentially much larger market than just plain IT. Taking a piece of that pie is what the four behemoths are after and they will happily go to war for digital consumer control. 2012 will no doubt see tireless efforts to get a firmer grip on the consumer eco system to drive revenue. Apple will step up its efforts to battle Amazon on content and delay Samsung, Amazon will lower the entry price for e-readers to $50 to fence off Barnes @ Noble and Apple iTunes, Google will drop more of its experimental business initiatives (solar panels) to focus on personalization and payments, and Facebook will develop its own smartphone thanks to the cash from their IPO. For Microsoft 2012 is decision time. Either they remain a tech company or they go all out on their Windows phone leveraging everything they have. Whatever they do, the days that Windows ruled the world are over.

At the METISfiles we regard the successful social media IPO’s as a changing of the guard in the information technology landscape. Interestingly in the late 90s the term disintermediation was used to indicate the decreasing importance of the middle man in the commercial process due to the onset of the Internet and online shopping. Now, in the second decade of the 21st century we have some very large companies that have completely designed their strategy around intermediation to become just that: to become the primary engagement vehicle for consumers. With that they will take chunks out of the roles of distributors, retailers and banks, much the same way Apple takes a cut of the revenue of content providers with its iTunes store.

At the same time the role of the traditional ICT industry will become one of a technology facilitator for the connected world providing the infrastructure, the performance and the service levels to make it all work; exactly what technology is all about. That doesn’t mean that traditional ICT spending is declining or not profitable, it just means that a new sector that is entirely built on and driven by IT is coming of age and represents a much bigger chunk of the digital pie than plain good old technology. It is therefore easy to predict that the consumer ecosystem war of 2011 was just an appetizer of the fierce pitched battles we are going to see in 2012.

Battle for the Home Expands: Samsung and LG Join
Hyperscale, Hyperconvergence and Hyperappliance
Personal Cloud: Beyond Control and Convenience