We have come a long way since Alexander Graham Bell invented the telephone in 1876. Mr. Bell’s first call was to his assistant, Thomas A. Watson, in the next room, speaking these famous first words, “Mr. Watson — come here — I want to see you”. Today we can reach virtually anyone on the planet instantly – whenever and wherever they are – with the multitude of communications channels and devices that we have at our disposal. But with this multitude comes the danger of information overload and communications breakdown. In fact, we make a point that the competitive advantages of being an elastic enterprise could be in real danger of being offset through ineffective collaboration between workers, customers, partners and business units caused by information overload and communications breakdown.

In the consumer world, social media hubs like Facebook and Google+ are taking on the role of the personal communicator, social networker, entertainment curator, search engine and directory. Increasingly they are integrating additional communications channels such as voice, mail, and video into their suite of social communications offerings. 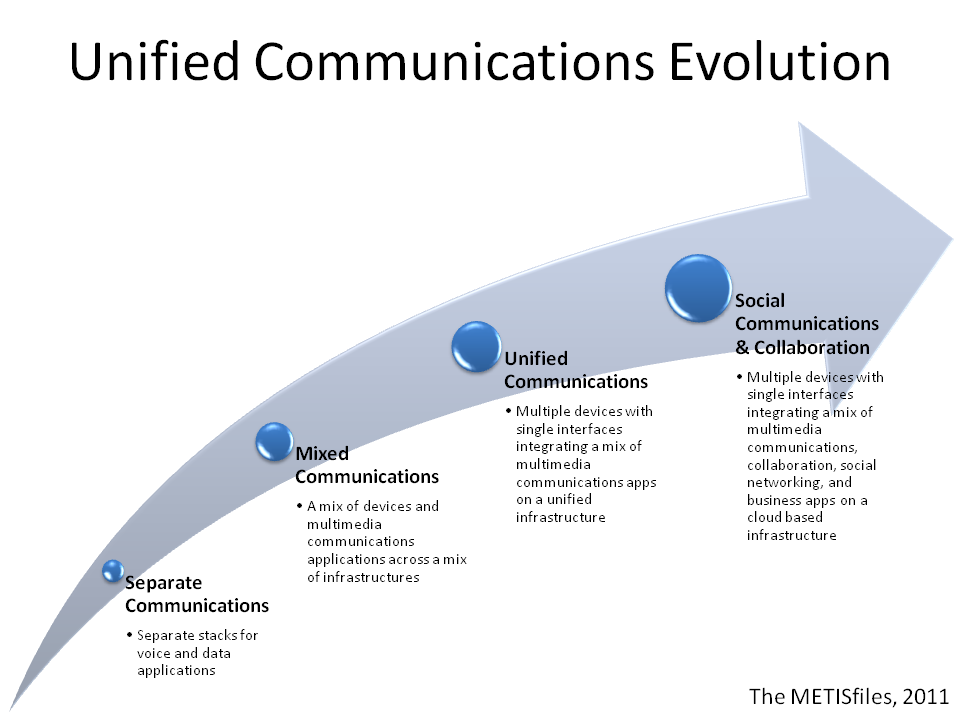 The above figure highlights the unified communications evolution as we see it. The four stages are consecutive in time, but co-exist today with stage one being very mature and stage four just starting to emerge.

Stage 1 – Separate Communications. Separate stacks for voice and data applications. For instance, the desktop phone and PBX infrastructure and circuit based switching for voice. Or the PC and the local area network plus Internet for email. In this stage, devices have a single communication application and are tied to a dedicated infrastructure.

Stage 2 – Mixed Communications. A mix of devices and multimedia communications applications across a mix of infrastructures. One device can have multiple applications. For instance mail, chat and voice (e.g. Skype) on a PC. Or mobile voice, email, and chat on a smartphone. The PBX has become an application on a server. Stacks have become integrated in the infrastructure layer with IP being the unifying factor.

One Interface To Rule Them All

Such a communications and collaboration interface looks surprisingly like…… Facebook! Or perhaps even more similar to social media dashboards like HootSuite and TweetDeck. And just like Facebook is a hub within the connected consumer ecosystem, a social Enterprise interface should be a hub within a connected worker partner ecosystem. Vendors that want to play within this ecosystem should make sure that they make API and RSS feeds available to each other. In addition, a serious single interface player will need to connect to the relevant apps and will need to have management and search capabilities available for the IT department and the user. Vendors that have the potential to develop such a single interface are, amongst others, Yammer, Jive, Cisco (Quad), IBM (Connections), and Salesforce (Chatter). Wildcard contenders are, amongst others, Facebook, Twitter, and HootSuite.

Working against a quick transition towards stage four in the unified communications evolution is the desire of vendors to lock-in customers rather than opening up their platforms to other players, the long lifecycle of existing and mature stage one solutions, and the fact that in most enterprises communications, collaboration, and business applications exist in silos.

We mentioned before that we believe that within most large enterprises today these four stages co-exist and that we believe that the very co-existence of these stages and the explosion in information and communication channels is causing communications and collaboration headaches for CIOs and for connected workers. Moving towards stage four will at least bring the promise of the single interface closer but will likely not streamline communications either unless both employees and management embrace the social enterprise.

What is your take on the evolution of unified communications? Will it bring increased productivity or communications breakdown? Do you believe in a single collaboration and communications dashboard for the enterprise? Let us know!

Operational Deployment Models: From In House To BPO
The Ethical Machine Versus The Ruthless Samaritan
Business Computing: Past, Present and Future
Share and Enjoy:

3 Responses to “From Unified To Social Communications And Collaboration”