Market researchers need to define what features make a workstation more than a PC, or a ‘smart’ phone more than a feature phone, if they want to size and forecast their markets. In the case of tablets there are significant challenges as these products are the conflux of a number of different products, business models and technologies. As in these other areas where comparative features play a part it is possible to define a number of sufficient (rather than necessary) tablet features, but we will need to revisit the issue regularly as the products evolve. 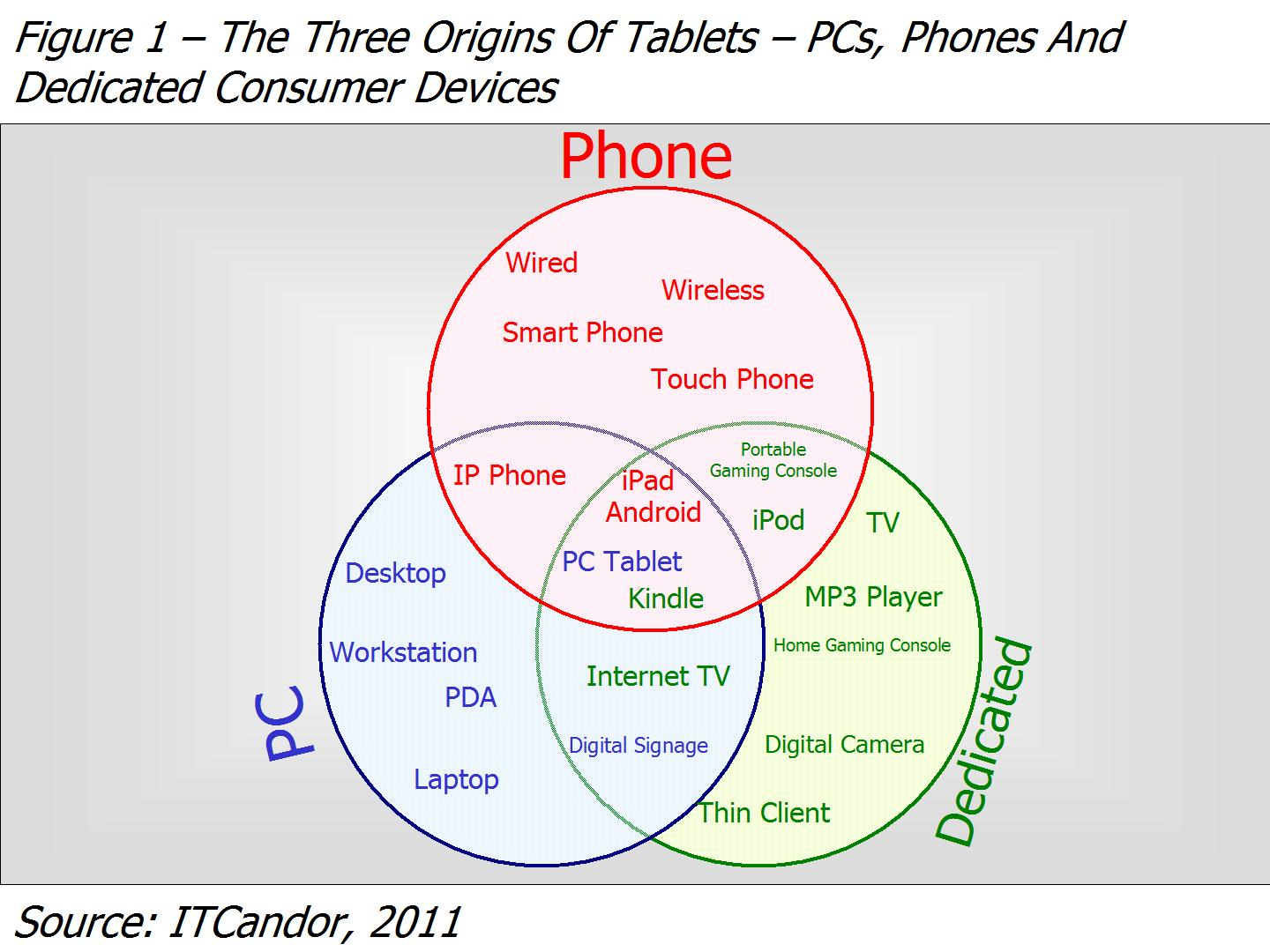 Tablets – Are A Convergence Of Three Separate Markets

These three areas have developed in different ways and have differences in the ecosystems which support them. In particular:

Current tablets can still be linked back to one of these three areas for their origin – Apple’s iPad uses its iOS operating system and therefore is very different from its PC offerings, as are the numerous tablets based on Google’s Android operating system; PC tablets from Fujitsu, HP and others have the same rich general purpose values of laptops, albeit with keyboards replaced with touch screens; Amazon’s Kindle ebook reader clearly comes from the dedicated consumer device area, combining the digitisation of physical books with digital ink. It is probable that tablets will always be linked to their sub-markets (smart tablets, PC tablets and dedicated-function tablets), although common OEM platforms for suppliers to customise for dedicated use will probably become more important over time. 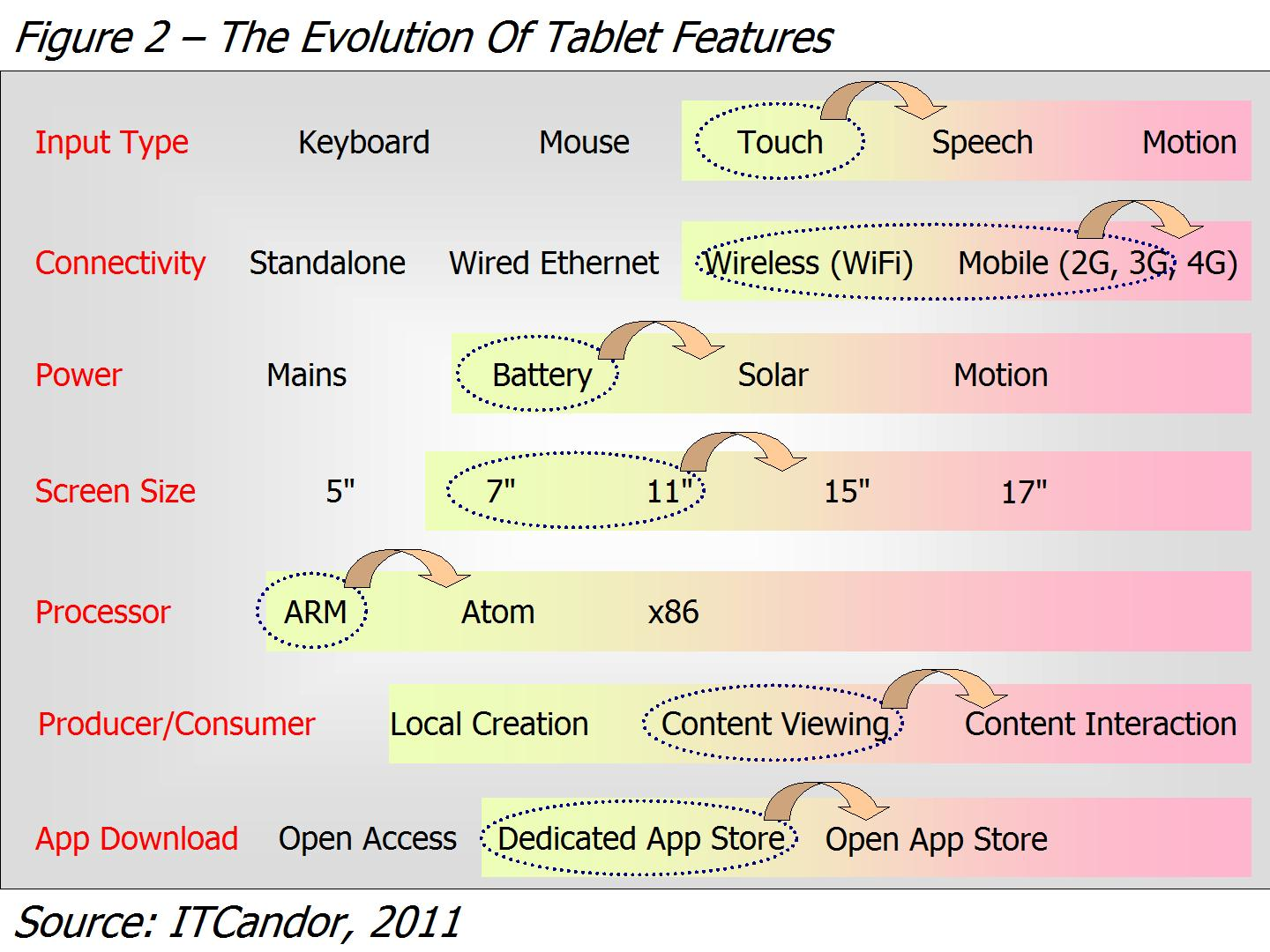 There are a number of features and usage aspects of devices that make them ‘tablets’, which we’ve captured in Figure 2.
Looking at each in turn we can differentiate between necessary and sufficient issues and look at how things are likely to develop. In particular:

All things considered we propose the following as an initial taxonomy for tablets and associated devices:

We will of course need to keep revising the specific definitions over time to accommodate the development of new features and usage models.

Some Conclusions – The Influence Of Age, Wealth And Privacy On Tablet Success

For as long as traditional content creation from installed remote programmes is required, the PC market will remain strong. However there is a shift in usage of devices based on the growing proportion of ‘digital natives’ in society. Those who were born after the mobile phone, PC and gaming console were invented arguably have less difficulty in adopting tablets than those of us who have had to learn each time what each new type of offering does.

The greatest influences on tablet adoption and their ability to eclipse other devices types will be linked to these younger users no doubt. Even if the cheapest tablets are priced at $99, most tablets are high-priced consumer products and their use will be restricted to those with greater disposable budgets – more so in the transition period when most families will have both PCs and tablets. The tablet market is also likely to be adversely affected by the inevitable privacy wars on the horizon: there are many revelations and legal cases ahead when users young and old discover the extent to which their personal information is being bartered and exchanged between unknown suppliers.

Tablets are important client devices and we intend to go on to size, analyse and forecast the market in depth.

I’d like to thank Pim Bilderbeek and Marcel Warmerdam of METISfiles who have contributed to this article.