The report argues that telcos are forced to identify new revenue streams, given the increasing competition from over-the-top Internet players (have a look at The METISfiles’ telco research for more analysis on this issue). Further, it says that if telcos are capable of creating a new ecosystem in healthcare, energy, and automotive, and place themselves at the center of these ecosystems they can generate significant value in the future. That is a big IF.

We believe it will be very difficult for telcos to capitalize on Enterprise opportunities, other than those that are horizontal and fairly generic in nature. Why? Because events in the past have taught us that telcos have failed to grab vertical enterprise opportunities before. Let’s have a look at four examples: education, air transport, public safety, and banking (see figure below). 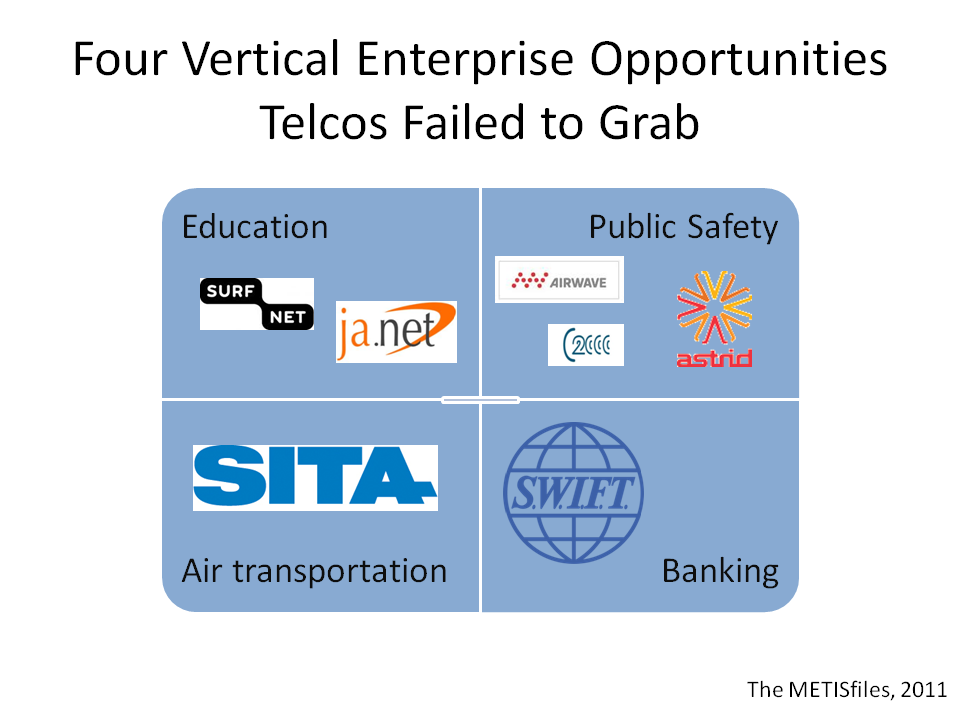 In the education vertical, NRENs (National Research and Education Networks) like SURFnet in the Netherlands and Janet in the UK have been supplying the high bandwidth needs of researchers and scientist for some time now. In fact, NRENs have been established because researchers and scientists could not get the type of communications services they needed from telcos. Here is a list of NRENs worldwide.

In the public safety sector, mobile networks like C2000 in the Netherlands, Airwave in the UK, and Astrid in Belgium have been supplying the mobile mission critical infrastructure for police, fire brigades, and ambulances. Similar to the education sector, these networks have been established because regular telco services could not satisfy mission critical communications needs. Telcos do operate and maintain some of these networks, but there are very few telcos in the list of members of the TETRA association (mission critical networks worldwide built on TETRA technology). In fact, those telcos that were in this market are bailing out. In 2007 mobile operator O2 sold Airwave to a private consortium. A clear sign that such a vertically oriented network was not O2’s cup of tea.

In the transport sector, SITA (Societe Internationale de Telecommunications Aeronautiques) is the global provider of telecommunications and infrastructure operations to airports, airlines and others. Yes, Orange Business Services (part of France Telecom) is joining forces with SITA to build cloud computing infrastructure, but SITA remains firmly in the drivers seat.

In the finance sector, SWIFT (Society for Worldwide Interbank Financial Telecommunication) is the global provider of secure messaging services and interface software to wholesale banking.

Both SITA and SWIFT have strong industry backing and are run by their members (airlines and banks). Business process and industry knowledge is key to operating communications in these vertical markets.

We believe that organisations like SITA and SWIFT will emerge for the automotive industry, governed by players in the automotive industry, not by telcos. Similar, we believe that on a more national scale, organisations like SURFnet, Janet, C2000, and Airwave will emerge for healthcare and energy. Governed by industry players, not by telcos. Telcos lack the business process and industry knowledge.

Having said that, the integration arms of telcos are heavily pursuing the vertical opportunity. T-Systems, for instance, does have a position in automotive and is pursuing the health and utility verticals.. Besides air transport, Orange Business Services is pursuing finance, health, and maritime/offshore industries. BT Global Services in the UK is pursuing no less than 25 (!) vertical opportunities. The jury is still out whether BT, Orange and T-Systems are capable of creating new ecosystems in these verticals, and place themselves at the center of these ecosystems to generate significant value in the future. Judging from past performance it will be a difficult task.

Do you believe telcos can grab the vertical opportunity? Let us know!