­­­­Sometimes you look at a company and think: they seem to be doing all the right things but why doesn’t it work? During the Colt Influencer Event 2011 in London it seemed indeed that Colt has come a long way from its telecom days, transforming into a state of the art ICT network solution provider. The transition was necessary and painful, but seems to have been carried out well. Colt has been rebranding the company from a plain telco (City of London Telecommunications) to a pan-European information delivery platform providing network solutions to business users. This transition has been going on for 5 years now and one wonders when we see business growing again because it isn’t.

Colt’s CEO Rakesh Bhasin explained during his presentation why Colt is well positioned to address business customer’s network and computing needs. But when he arrived at the financial chapter regarding the 2010 results he was a bit short with his explanation. He pointed out that both margins and profit were higher than 2009 and that they had reached many of their goals for 2010. But being CEO of a public company he was very tightlipped regarding the future. All understandable but why doesn’t Colt show a growing revenue line? On the question  what the plans of Colt are he simply answered: growth. He clearly understood what is expected from Colt. But can he deliver?

To understand the problem one needs to look at the revenue line. 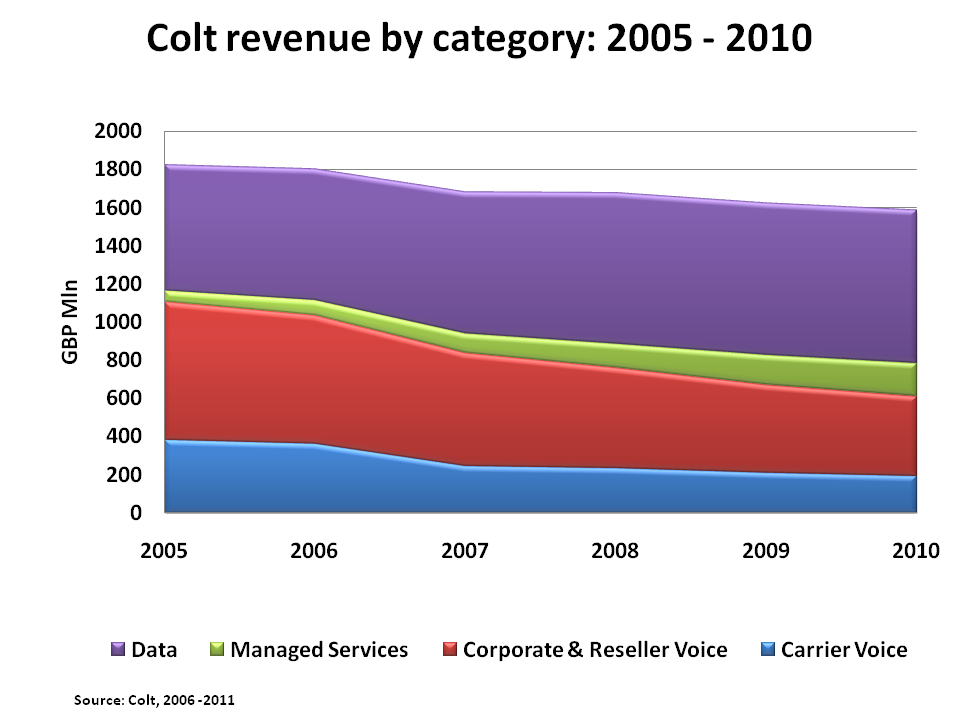 From the revenue graph it becomes clear that Colt’s telco past is still playing a major role in the business results. All telcos face a declining voice revenue and are moving to data and value-added services. The  problem with Colt is that their data and managed services revenue is not growing fast enough to make up for their declining voice revenue. Unfortunately there was only a basic revenue break out in terms of product line and client base. The 2011 annual report shows  a small decline in data revenue in the enterprise segment while in the midsize segment only 6% of the revenue comes from managed services. A more detailed mix and match of Colt’s product/services revenue and client base will likely reveal that they play second fiddle in the enterprise segment (second to BT, Deutsche Telecom and France Telecom) and that they lack sufficient progress in the SMB segment.

The first issue is a difficult one as corporate clients do not often change service providers. Complexity and cost prevent this from happening and winning from incumbents in Germany, France and the UK is not an easy game. However, since the enterprise segment makes up 40% of their revenue it is of the utmost important to increase their share of wallet with enterprise clients. This is a long term albeit necessary effort but ongoing investment  in their fiber optic network and datacenter activities will show corporate clients that Colt is a potential alternative.

The SMB segment is interesting because in theory Colt is perfectly positioned to target this segment with their managed services portfolio, especially in some vertical segments such as finance and business services. But does their channel strategy work? What can they offer the channel? Channel partners like to have options but channel account managers will opt for the highest margin offered and sell that instead. Another issue here is a lack of brand power and brand attributes within the SMB segment. A stronger partner marketing focus is clearly necessary.

There is no denying that Colt is doing some interesting things to grow future revenue besides laying more miles of fiber-optic cable. One of the most promising activities is datacenter construction. Colt’s modular datacenters have been designed to  be built in 3 months or less depending on the required size. With the demand for datacenter capacity growing due to the expanding digital universe and the increasing momentum for cloud computing Colt holds an ace. But the lead over competitors may be short so they have to play their datacenter hand strong. Looking at the Olympics next year in London they should be able to turn this to their advantage.

While we think that Colt has made the right changes and shows a solid profit line it still suffers from shrinking revenues. For 2011 we expect that cost cutting will be much more difficult than ever before as these already have been stripped to the bare bone (a quarter of their employees are now based in India). Generating a growing deal flow will therefore be key. But it is difficult to tap deeper in to the pockets of corporate institutions and playing an important role in the SMB market will require a clear understanding of the SMB needs and the SMB channel. The timing of their datacenter building offering and the Olympics may just give Colt the necessary momentum to turn their revenue around but at the same time we think their SMB strategy needs refinement and better execution. At the METISfiles we will keep you posted on Colt’s next quarterly results to see if Colt will be able to turn the topline back to growth. Let us know what you think of  Colts progress!