We love scenario thinking here at the METISfiles! In a recent keynote at IT-Dagen 2011 in Denmark, METISfiles principal analyst for the elastic enterprise Pim Bilderbeek looked at the current and future state of digital government in Europe. Now is a good time to look at our digital future, because recent events dictate that this future might not be as rosy as we think:

So, will we ever be ready for Digital Europe? There are four likely scenarios that government officials will need to consider in planning public service accessibility and government digitalization for the next 10 years. The two axes to consider in these four likely futures are 1) the availability of public cloud infrastructure and the trust that citizens have in using this and 2) the digitalization state of the government itself. Will government embrace public cloud for both internal and external services, or will government limit the uptake of both? Will citizens trust government with their data and will everyone have equal access or will there be a dual Internet infrastructure and wide distrust? The graph below lays it all out in four resulting scenarios: 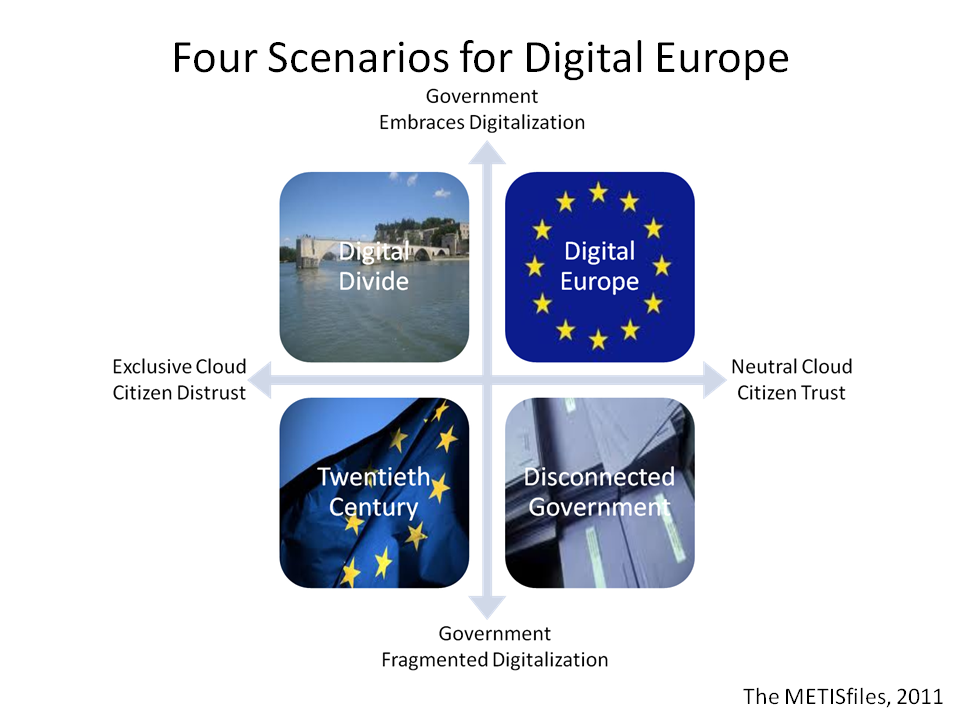 Digital Europe is the preferred scenario of Neelie Kroes and the European Commission. This is the Europe where governments have embraced cloud services. Not only to become more efficient themselves, but also to deliver on-demand services to the business community and citizens. In this scenario there is also a neutral cloud environment available, accessible for every citizen and company, poor or rich, large or small.

Digital Divide is a scenario where governments have embraced cloud services and are delivering on-demand services. However, in this scenario the Internet is no longer neutral. There are in fact several Internets and clouds and there is a division in the level of government service between those who have access to exclusive clouds and those who have not. In addition, there is no catering for those who are not ready to trust the government to safeguard their private data.

Twentieth Century is a scenario where governments fail to implement cloud services and the Internet is no longer neutral. This takes Europe back to the 20th century. Digital infrastructure that is content and service neutral is scarce, citizens do not want to bring their private data to the cloud, the government has limited on-demand service availability and has an inefficient IT infrastructure.

The slides of our keynote at IT-Dagen 2011 in Copenhagen can be downloaded here.

There is a new benchmark EU report on digital government available here.

The Dutch Digitale AgendaNL 2011-2015 can be downloaded here.

2 Responses to “Four Scenarios for Digital Europe: Are We Ready?”