Scenario planning is used by business strategists to prepare their companies for different futures. Why is this necessary? Simply because predicting the future is not an exact science. If the future cannot be known it is only prudent to be prepared for several permutations of possible futures. A popular way of scenario planning is sketching four possible futures that are governed by two important influencing elements. Each elements has 2 opposite outcomes. The combination of the opposite outcomes of each element create four permutations of the future. 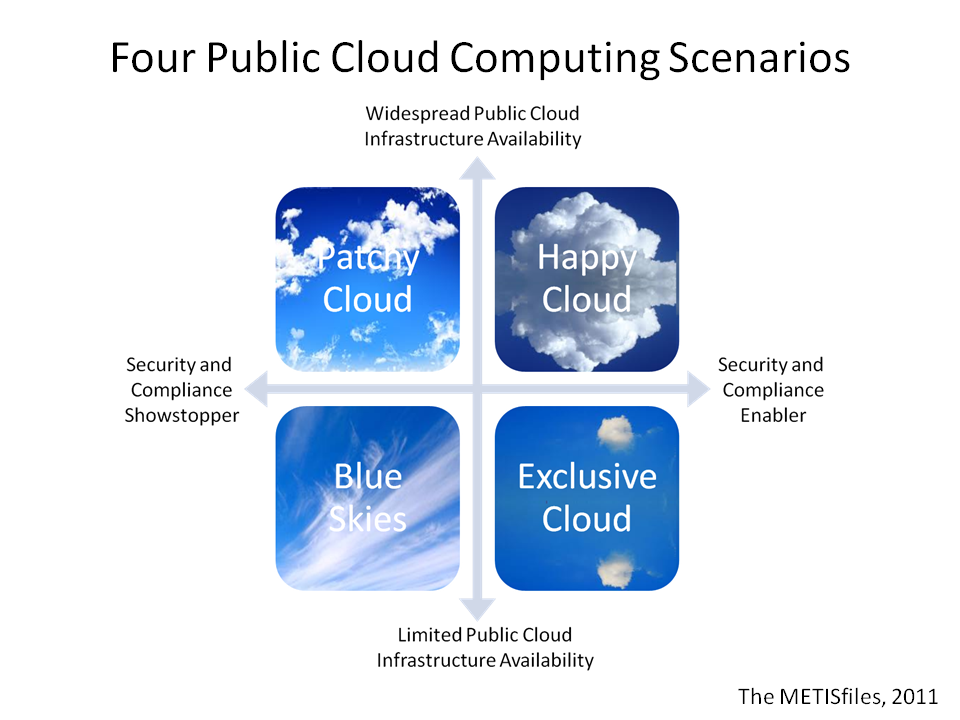 The happy cloud scenario is the scenario that most cloud providers are banking on. In this scenario there is a widely available public cloud infrastructure and it turns out that public cloud is actually more secure and compliant than legacy IT implementations. Business customers will happily get their IT from the cloud and there will be few tasks left for the IT department.

The patchy cloud scenario is a scenario in which there is a widely available public cloud infrastructure but there are real issues around security and compliance. In this scenario, only applications that are non critical and have no compliancy requirements will be put into the public cloud. The IT department will build private clouds and will dictate cloud access.

The blue skies scenario is a scenario where there is a limited availability of public cloud infrastructure and there remain real issues around security and compliance. In this scenario, the Internet is no longer content neutral and as a result there will be less public cloud infrastructure. In addition, the usage of the infrastructure that is there is hampered by security and compliance problems. The IT department will build private clouds and there will be little to no cloud access.

Even though none of these four scenarios might actually become reality, it is likely that the future of public cloud computing will have elements of all four included. It is therefore only common business sense to be prepared for it. Are you prepared for (elements of) these scenarios? Or are you putting all the money on the happy cloud? Let us know!